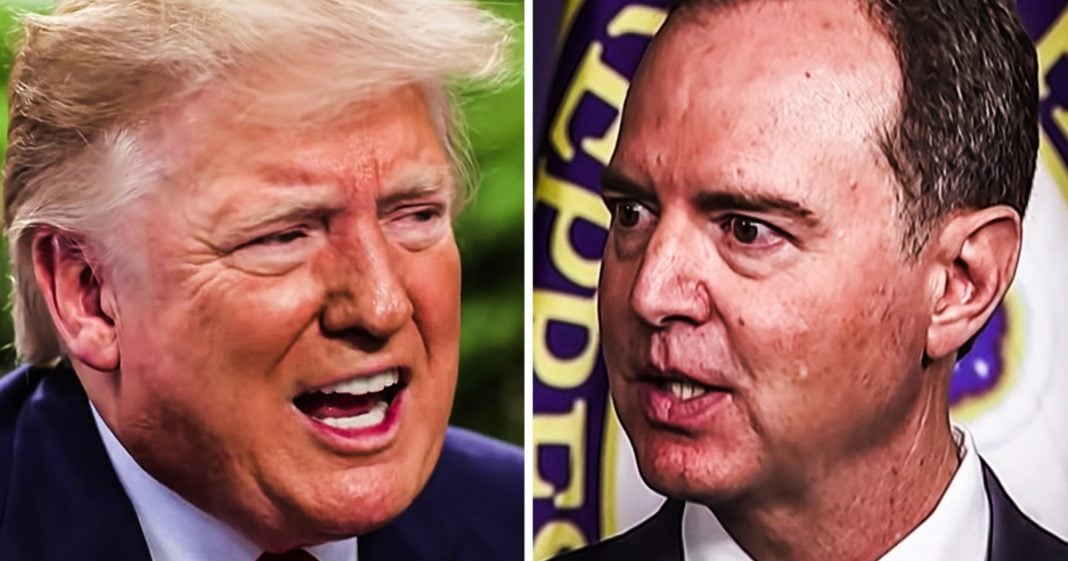 Donald Trump always believes that he is the smartest person in the room, and that arrogance could easily cost him his job. His latest defense of impeachment is to claim that every transcript released by the Democrats has been doctored by Adam Schiff, a defense that would only work if his base was, in fact, incredibly ignorant. Ring of Fire’s Farron Cousins explains why this defense isn’t going to work on most of the population.

*This transcript was generated by a third-party transcription software company, so please excuse any typos.
All right, folks, the public impeachment hearings begin this week and Donald Trump spent his Monday before these hearings started, uh, freaking out a little bit. But in his freak out, he unveiled his new strategy, if you want to call it that, on how he’s going to deal with everything moving forward. And his new strategy is completely dependent upon his base being stupid. Now I’m not saying that to insult these people. I’m saying that that’s what Donald Trump thinks because he laid out his new a strategy on Twitter yesterday when he tweeted out shifty Adam Schift will only release doctored transcripts. We haven’t even seen the documents and are restricted from get this. Having a lawyer. Republicans should put out their own transcripts. Schiff must testify as to why he made up a statement from me and read it to all. So he is relying on one thing. Adam Schiff did one time to prove a point. Like Schiff wasn’t actually saying this is what the president said. He said, I’m going to ad lib here. And yeah, maybe it was juvenile, maybe it was pointless. But that’s what he chose to do. And he had the right to do it. But because of that, Donald Trump is now going to claim that everything that comes out of this impeachment inquiry is completely false. It’s doctored and it’s been made up by Adam Schiff. He’s trying to prey on the fact that the Republicans, for some reason, absolutely hate Adam Schiff for a reason. That has nothing to do with this politics at all, just because he’s been really hard on the president, and that’s absolute insanity. But again, his entire defense here that Adam Schiff is going to just make stuff up. It’s all going to be doctored. That only works if his base is in fact, as stupid as he thinks they are. And to be honest, yes, some of them are. Most of them are not. They know that the house of representatives is not going to release doctored transcripts of these events. Most of them understand the fact that the trial hasn’t started. So technically Donald Trump does not get a lawyer yet because we’re not even at trial, even though they also know that Rudy Giuliani is his lawyer, so they know he has a lawyer and they’re now getting to see what’s coming out just like everybody else. In order to prepare for the trial. Yes, there’ll be able to get their hands on everything, even things we haven’t seen yet because that’s how trials work. He will be fully prepared to take this on if he can defend himself from it. But in the meantime, before we hit that point, he’s going to lie. He’s going to mislead and he’s going to bank on the fact that his base are idiots. And this is where I’m speaking to Donald Trump’s base right now. Prove him wrong. Right? I’m not trying to be insulting to you when I say these things, I am saying that this is what he thinks of you. So prove him wrong. Con-men always rely on the fact that nobody’s as smart as them, or at least that’s what they think. Arrogant people think the same way. I’m the best. I’m the smartest. Nobody can beat me and I can trick them all. Prove him wrong. He tricked you all once. At least he’s been tricking you ever since then. Don’t fall for this today. There is nothing true about what he says. He is entitled to a lawyer. He has a lawyer, even though his lawyers and competent and also under investigation, Adam Schiff is not going to doctor these things because if they did, Republicans who were there would know about it and they would let us know. They haven’t done that. So we do have these transcripts available. They are not doctored. They are what actually happened? Not to mention, don’t you think that the witnesses who testified would see a statement from them and be like, well, hold up. I actually never said that. This is a lie. It’s literally every single person, including the Republicans and the witnesses versus Donald Trump. And if they aren’t saying that any of this is false, but Trump is one of those groups is lying, and I’m willing to bet it’s not the group that includes literally everybody, but Trump.