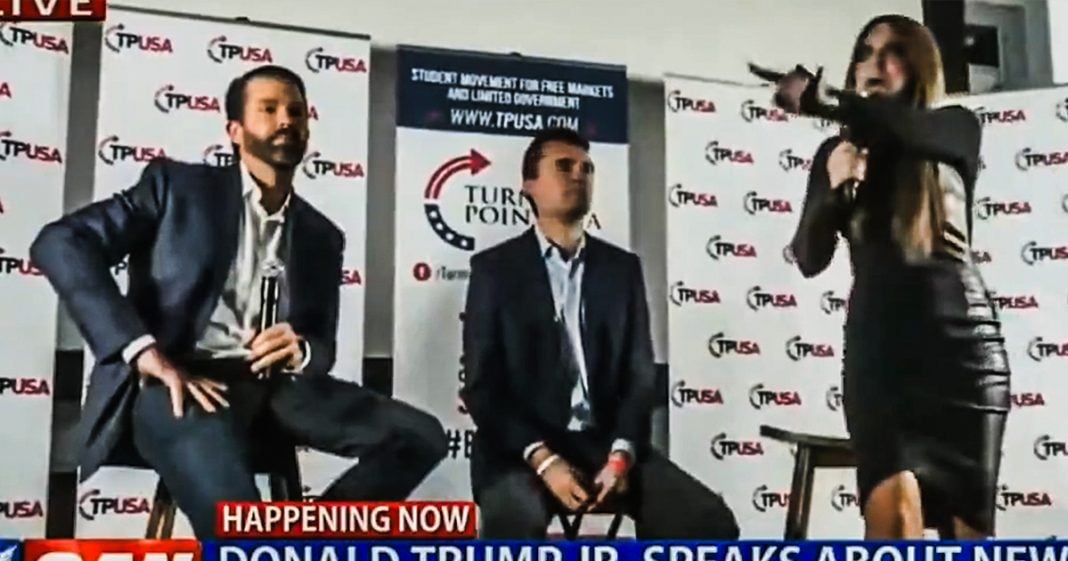 During a book tour event this past weekend, Donald Trump, Jr. was actually booed off stage by the crowd because of a cancelled Q&A session. These weren’t the same protestors who were booing Trump before the event, these were his actual fans that were in the crowd because they like him. But everyone has a breaking point, as Ring of Fire’s Farron Cousins explains.

*This transcript was generated by a third-party transcription software company, so please excuse any typos.
On Sunday, Donald Trump jr and his girlfriend, former Fox news host Kimberly Guilfoyle, traveled out to UCLA to promote his new book called triggered. The event was put on by turning point USA, his own Charlie Kirk and he was up there on stage with Donald Trump jr and unfortunately for that trio, nothing went according to plan. First and foremost, the crowd which was filled with, you know, maga fans, these make America great again folks, they wanted to be there but they grew irate from the start. After it was announced that they weren’t going to be doing the Q&A. Here’s some footage of that.
[Q&A, Q&A, Q&A. And special guests can really do]
so everybody’s angry and rightfully so, right? I mean, you go to this event, you expect to have the opportunity to ask a question of one of your idols standing up there on stage. It’s a big deal for these people. They were big fans of him. They just wanted to get their question out and have the opportunity to go home and tell their families that for five seconds. I technically spoke to Donald Trump jr and they took it away from them at the start and then the crowd didn’t really settle down after that. You know, they became the ones who were a little bit triggered by Donald Trump jr and turning point USA. His decision to not take questions. So then, then things got a little dicey and uh, Trump’s girlfriend got up on stage and started insulting her own fans after they continued booing. Take a look.
[and that’s, that is the problem. And the reason, oftentimes it doesn’t make sense to do the Q and A’s, not because we’re not willing talk about the questions cause we do [inaudible] jacket with nonsense looking to go for some sort of sound bite. You have people spreading nonsense, spreading hay to try to take over that room cause you’re not making your parents proud by being rude and disruptive and [inaudible] people around you so that they can hear you don’t play. You don’t play by the same rules. Let me tell you, I bet you engage in, go on online dating because you’re impressing no one here to get a date in person.] So it’s important to point out once again, Kimberly, that um, those people are your fans. The people you’re insulting saying that they have to do online dating because nobody would date them if they met them in person. Those are your fans and honestly, I don’t disagree with you either with your analysis, but still they actually liked you before this event started. They liked your boyfriend Donnie jr. They liked Charlie Kirk and now I’m willing to bet that a lot of them don’t. And Donald Trump jr in that clip, you hear him try to explain why they canceled the Q and a, they just left wing activism. No, no, you’re lying about that because all of the left wing activists were actually outside of UCLA. That’s where they got to protest you. They didn’t go inside. Those were your fans and you’re lying to them because you’re a coward and then you let your girlfriend get up there and insult everyone in that audience. Now, I’ve never written a book much less tried to sell one, but I have to imagine that going out there and having the woman you’re sleeping with insult your target audience, probably not the best way to get those books sales up. Is it.