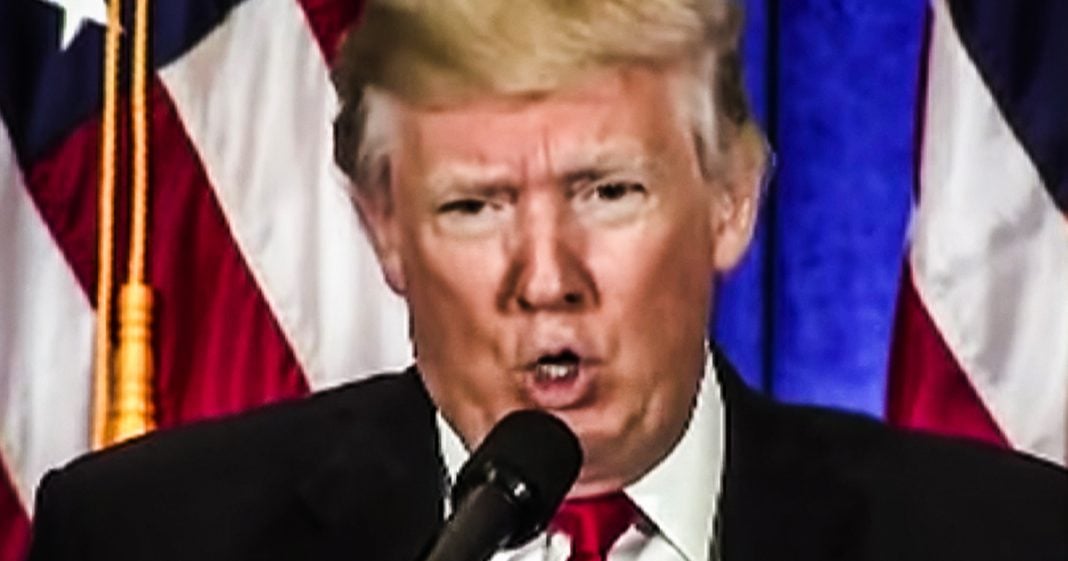 One of Donald Trump’s own judicial appointees told him on Monday that he can’t keep his tax returns hidden forever, and told the President that he cannot sue the state of New York in order to block the release. This is just the latest in a long line of setbacks for the President on the issue, and the fact that it came from the President’s own appointee just shows how loyalty can shift when you get a lifetime appointment. Ring of Fire’s Farron Cousins discusses this.

*This transcript was generated by a third-party transcription software company, so please excuse any typos.
A very interesting decision was handed down yesterday by a Donald Trump appointed judge for the, uh, uh, district court for the district of Columbia judge by the name of Carl Nichols, who again, Donald Trump appointed and got him on that bench. And judge Nichols ruled yesterday that, no, I’m sorry, Donald Trump, you have not proven in any way that there was a conspiracy against you in the state of New York to force you to release your tax returns so you can’t file your conspiracy lawsuit in my jurisdiction. That’s a pretty big ruling from this judge and what they call it, they call it conspiracy jurisdiction. And to kind of dumb that down a little bit to explain it. It’s exactly what it would, it seems like Donald Trump’s lawyers went into this court trying to file a lawsuit saying there is a conspiracy against the president of the United States who lives in your district judge. But the conspiracy’s happening up in New York state, they have conspired with Democrats in the house of representatives, which is also your, your jurisdiction to judge. And this is what they argued in court, by the way. Anyway, law makers up in New York, conspiring with Democrats in the house of representatives to take out the president of the United States by unfairly forcing him to turn over and make public his tax returns, and that’s just wrong except that it’s not an even a Trump appointed judge had to say, yeah, you haven’t proven in any way that there is some kind of conspiracy against the president, so thank you for your time, but please leave now. You can’t file your lawsuit here. Now Donald Trump has pretty much lost every single lawsuit, every single court challenge with regards to his tax returns. They have one option left now that their conspiracy lawsuit has been tossed and that is the Supreme court, but that’s why this particular ruling is enough to kind of give us a little bit of faith, right? This was a Trump appointed judge and a Trump centric issue came before him and he had to say like, yeah, no man, you’re not proving anything. This is kind of weird. Please go away. There was no loyalty to Donald Trump there, which is what I have been saying for a long time. Now, don’t get me wrong, conservative judges stay conservative, right? They will fight for conservative causes. They will fight to take our rights away all day long. But when it comes to simply protecting a Republican politician, man, they don’t care. What do they care? Why would they care? They’re appointed for life. They don’t have to be loyal to a single politician. They’ll fight for the party. Tooth and nail, don’t get me wrong, but when it comes to just saving one person’s behind, they don’t care. Now, hopefully when this case makes it to the Supreme court, which it will, hopefully we see the same thing there. I know we’re not gonna see it among all the judges, but maybe one or two of them will see it that way. And if that’s the case, Trump is screwed at that point because once you lose at the Supreme court literally nowhere else you can take your case.