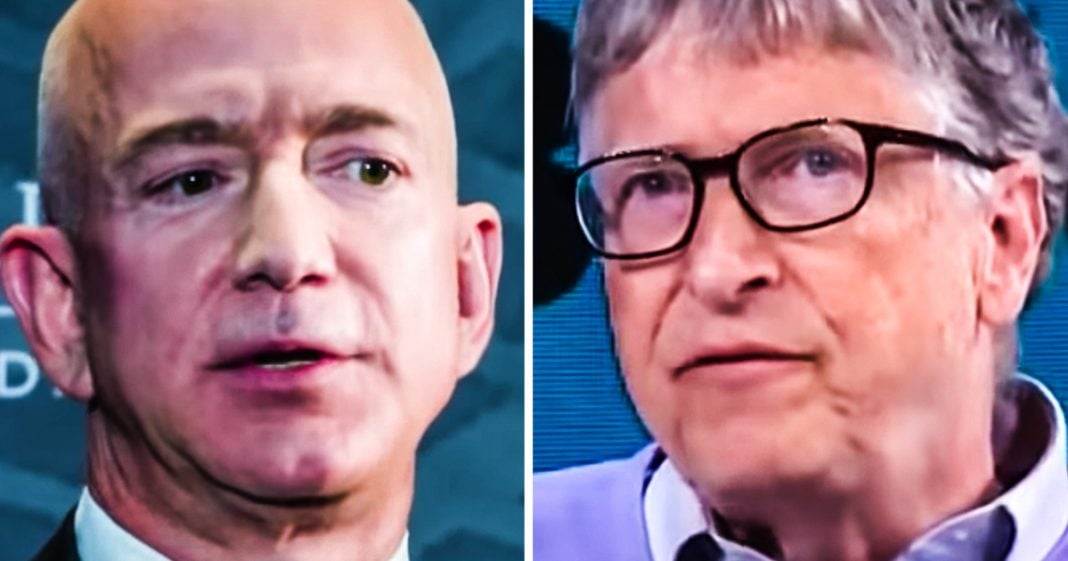 Bill Gates doesn’t like the idea of having his excessive wealth taxed to the degree that Elizabeth Warren wants to tax it. Jeff Bezos isn’t happy about Bernie Sanders repeatedly calling out his unethical treatment of workers. All over the country, billionaires are running scared of what’s on the horizon, and its about time. They’ve had it too good for too long, while screwing the very people who they depend on. Ring of Fire’s Farron Cousins explains what’s happening.

*This transcript was generated by a third-party transcription software company, so please excuse any typos.
For the first time in the United States since the savings and loan scandals of the 1980s that sole CEOs and wealthy elite finally go to jail for the first time. Since then, billionaires are finally scared and they should be. Here’s what’s happened just in the last couple of weeks, obviously last week we had bill Gates going at it with Elizabeth Warren saying, you know, I’m fine if I had to pay a couple billion in taxes, whatever, but when you get up to 100 million, who boy? I draw the line right there. Well, nobody ever said they were gonna tax you $100 billion bill. You would think somebody who knows programming and numbers and code and things like that would be a little bit better with the math, but you’re out there just like other millionaires and billionaires spreading misinformation because you don’t want to pay more in taxes. That’s the bottom line. So you’re attacking Elizabeth Warren and Elizabeth Warren, unfortunately had a very milk toast responsive. Hey, I’m open to talk to everybody. Bill, maybe we sit down a cup of coffee and I explained this to you. It’s very diplomatic, but that’s really not the best route right now. Billionaires should be scared and they’re scared of Elizabeth Warren and they’re also even more scared of Bernie Sanders. You know, you’ve got these CEOs out there attacking these candidates. Jamie Diamond’s been out against Elizabeth Warren a lot recently. Bernie Sanders on his website has this whole hall of fame for his non endorsements of all the CEOs and billionaires who have attacked him. And the reason they’re doing this against these two candidates in particular are because they want these people to pay more. Bernie Sanders is flat out said that billionaires shouldn’t exist and he’s not wrong. I even seen a single decent argument as to why somebody should have $1 billion, they simply shouldn’t. And then you have your Bidens and you got your bottajudges if that’s the whatever of that. But Buddha, judge Biden and literally everybody else on the right is out there saying, Hey, don’t punish somebody just cause they made a lot of money. That’s just a very successful person doing what successful people do. And to that, those of us who understand what’s happening, say that’s not true. None of these billionaires today could have gotten where they were by themselves. They used people and in most cases they abused people to get there. Jeff Bezos is what the richest man in the world, even after his divorce where he had to pay billions of dollars and yet we still see stories about employees having to pee in bottles while he just bought a new mansion that has 25 bathrooms in it. That’s unethical. His wealth shouldn’t exist and he is getting rich by screwing over his employees. The Walton family, owners of Walmart, same story. These aren’t good ethical people who just have a ton of money. These are people who got that much money by screwing people over. The income gap here in the United States is getting wider by the year. The rich have more, the poor have less, and it’s been that way for a very long time. But even if it was just the pay discrepancies or the general mistreatment of workers may be a billionaire could come in and say, all right, we’re going to change these. I’m going to pay you more. Go to the bathroom when you need to go to the bathroom. Sure. And that would fix those problems. Right. Not really because these billionaires are also doing more dirty and deceitful things behind the scenes than just running their companies. They’re also paying off politicians. We saw Amazon just pump $1.5 million into local races in Seattle, only to have it blow up in their face. But other times Amazon’s been successful. So have these other multibillion-dollar companies, they’ve destroyed unions here in the United States. Koch brothers have been leading that charge. Those billionaires, well, we’re down to one of them now, They have gotten themselves these little tax incentives. Anytime they want to build a new store, they actually profit off of just building it because of all the incentives and subsidies they get. Walmart has been a pioneer in that realm. The great American job scam by Greg Leroy is a phenomenal read that explains Walmart and other companies’ roles in doing that. If you haven’t read it, please do. But that’s the thing. It’s not just that you’re treating your employees like crap. It’s that you’re influencing the system itself, the government to allow you to continue treating people like crap, to make it legal, to treat them like crap. That’s why billionaires shouldn’t exist. Nobody needs $1 billion. And anytime somebody does cross that threshold, even if they were the most moral person imaginable before that, you start to see them get corrupted. They start to think, you know what? I don’t want this regulation on me. I’m going to pay a politician to make sure it never happens. Just this one time. Oh, and it feels good that first time, right? Ooh, that worked. Maybe I’d do it again over here with this one. You might do it with this one. And they crossed that line so far. They can’t even remember a time when they had morals or goals. And that’s what’s happened in America today. But right now, this billionaire class is terrified. And to that I say it’s about damn time.