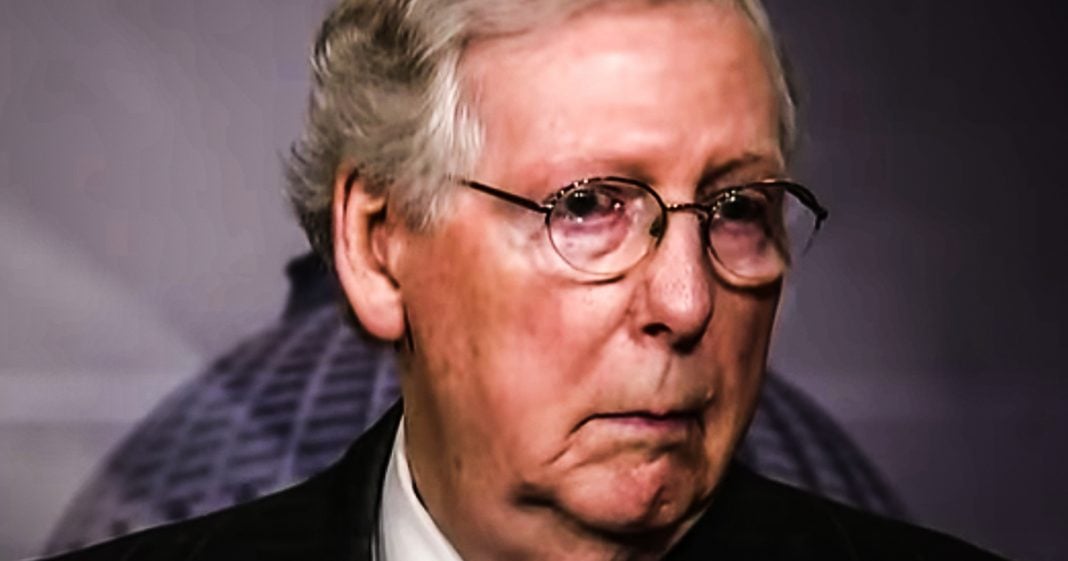 During a closed-door meeting with Republicans at the end of last week, Republican senate majority leader Mitch McConnell told his fellow Republicans that they were on their own with their impeachment defenses. This is the result of the White House repeatedly failing to come up with a unified, coherent message that Republicans could use. Ring of Fire’s Farron Cousins explains what’s happening and how it will play out.

*This transcript was generated by a third-party transcription software company, so please excuse any typos.
Recently, Mitch McConnell held a closed door meeting with Senate Republicans where he one showed them a PowerPoint presentation that I guess his staff had put together to explain how the impeachment process works. Now, I would think that these people serving in the Senate, uh, many of whom actually went through the Clinton impeachment years, I would think they would know how it works. Even if your, you know, your first day on the job, you’re a US Senator, you should know basic things like that. But nonetheless, Mitch McConnell knows, his audience knows they’re not the brightest. So he puts together a PowerPoint, says this is how impeachment works. He then told them something rather spectacular. He said, you’re on your own. I’m not going to tell you what to say to defend this guy. We’re not going to come up with a unified set of Republican talking points on how to defend the guy. You just go out there and say whatever you want to say, you know, whatever helps your situation. He said, whatever helps your situation. So if you’re up for reelection and you’re in a district that doesn’t necessarily support Trump, I guess that means, or a state, excuse me, I guess that means, you know, don’t go all in saying the president’s innocent, but if you’re not up for reelection and, or you’re in a very safe Trump state, go out there and say it’s all a lie. I don’t care. So that’s Mitch McConnell’s plan. Every man and woman for themselves. We’re not going to tell you what to say. Make up your own thing. And I hope you really enjoyed my PowerPoint cause I spent a lot of time on it. Um, I, I think it goes without saying that this is a really bad strategy that Mitch McConnell’s laying out for his Republicans. But for those of us who would love to see Trump impeached, I, I have to say that I love this, but here’s the thing. We have known for a very long time that Republicans have no unified message when it comes to the impeachment inquiry. You know, we have seen Matt Gates go out there and try to be the hero of this for Republicans only to look like the biggest idiot ever to walk the halls of Congress. So his weird little plan isn’t working. Mitch McConnell went to the white house as we reported a week or so ago, and begged the president to tell them what a, what to say about impeachment that didn’t work. The white house has on two different occasions, tried to come up with talking points for Republicans, but then accidentally emailed them to all of the Democrats in Congress instead of the Republicans. So you know, that didn’t work out too well either. They have no unified message. They may all be coming from the same area, which is don’t impeach Donald Trump, but they’re all going to be saying weird different things to get to that point. And they’re gonna end up contradicting one another. And then a savvy reporter, if we have any of those left, is going to call them on it and say, well, hold up, you just said this, but this guy over here said this and those don’t mesh well together and then both of those people are going to look like idiots and yet another talking point is going to fall apart. But at the end of the day, does it even matter? I mean, if Mitch McConnell’s meeting with his Senate Republicans saying, do whatever the hell you want, I think the message really is that do whatever you want because we all know we’re going to vote to keep them in office anyway. I mean, that’s the big takeaway. Mitch McConnell is not concerned and I don’t think many Republicans in the Senate are concerned. Republicans in the house aren’t that concerned other than Matt Gates, because he, I think secretly loves Donald Trump. they’re not concerned because they know they can’t stop the Democrats. So they can try to make them look foolish, but if not, Oh well, they know they got their boys over in the Senate that are going to do whatever they have to to save Donald Trump’s job. So the reason they don’t have a unified message is because they honestly, at this point, know that they don’t need one in order to save Donald Trump.