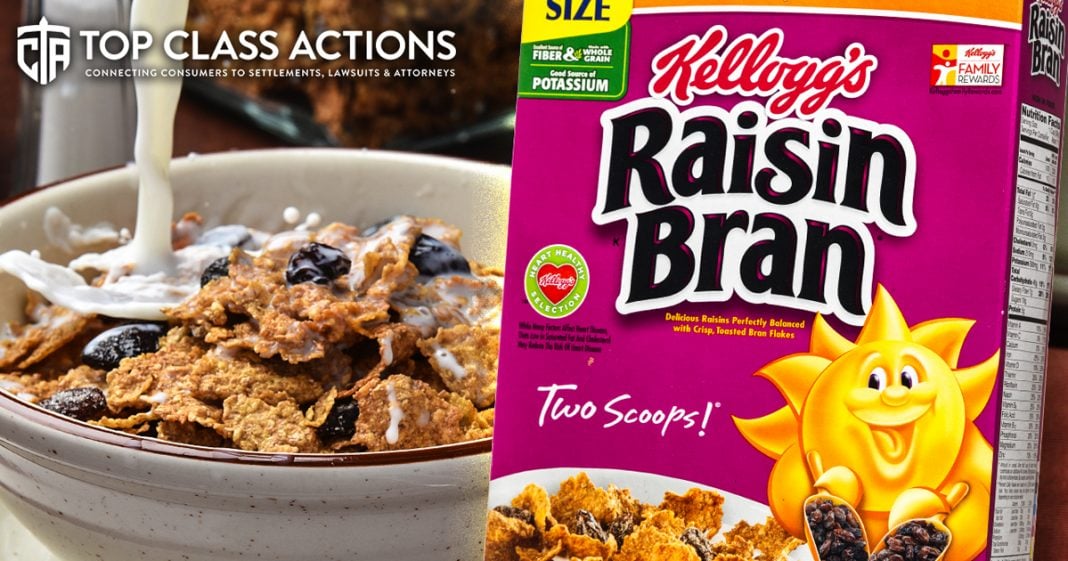 Kellogg’s recently agreed to pay $20 million to resolve claims that they falsely advertised their sugar-filled cereals as healthy. The Kellogg’s class action settlement will reportedly provide $20 million in direct Class Member payments and will implement marketing changes estimated to be worth more than $11 million. These changes include the removal or modification of claims such as “healthy,” “wholesome” and “nutritious” on cereals such as Smart Start and Raisin Bran. Ring of Fire’s Farron Cousins discusses this with Scott Hardy, the President of Top Class Actions.

Farron Cousins:                  Over the past year in these top class actions segments that we’ve been doing, we’ve talked a lot about cereals and the sugar content in those cereals. In addition to the fact that a lot of these super sugary cereals also market themselves as low sugar, you know, less sugar and in many cases they actually claim to be healthy. Well, those claims have now resulted in an agreement between Kellogg’s and the plaintiffs here for $20 million. The claim, or the settlement, excuse me, still has to be approved by a judge, but I’m joined now by Scott Hardy, the president of Top Class Actions to tell us what this settlement is all about. So Scott, you and I, as I just mentioned, we have discussed, possibly even this particular class action in the past. Lay this one out for us real quick.

Scott Hardy:                          So the, this resolves at least three different class actions against Kellogg’s. It’s all about, as you said, Kellogg’s using words like healthy, wholesome, nutritious to describe these cereals. And these were marketed as healthy, wholesome options. You know, when you’re sitting there, if you’re starting a diet, you’re starting a new workout plan, you want a healthy breakfast, Raisin Bran comes to mind. And, you know, you look at that and say that’s a good healthy option for me. Well, there’s a lot of sugar in that. Same thing with the Frosted Mini-Wheats or Smart Start. Smart Start is all over the place marketed as just a great way, a healthy way to start your day.

But again, there’s a lot of sugar in this. And so these class actions have been going on and now we see the settlement. This also includes the Nutri-Grain snack bars. The Nutri-Grain snack bars, it’s interesting because that class action was not certified by a judge, but Kellogg said, hey, we’re going ahead and settling all of these other cases. Let’s go ahead and include, let’s, let’s include Nutri-Grain, get that one behind us and settle all these at once for this $20 million that you mentioned. And part of this settlement includes taking away those words like health, wholesome and nutritious from their marketing and the boxes themselves.

Farron Cousins:                  You know, and again, to me that’s one of the biggest changes here that, that is so beneficial for the consumers. Not just are you getting compensated but changing the practice, changing what these companies do, changing that corporate behavior, changing what people are going to see when they walk down that ultra colorful sugar, cereal aisle, excuse me, quite the Freudian slip there. But no, this is the best part. You take those labels off, you modify those labels so that people, when they’re looking at it on the store shelf, they’re not going to be confused about what’s in it.

If you want the sugary cereal, get it. You know, as, as long as your diet doesn’t restrict that somehow, fine. Do what you want. It’s just companies can’t deceive you into thinking that you’re buying something that’s healthy when you’ve just had your full days worth of sugar intake with your bowl of cereal in the morning.

Farron Cousins:                  Absolutely not. So we still have to wait for a judge to sign off on this, right? I mean, both sides have agreed to it, but ultimately you got to have the judge come in. So, so what’s the status on that?

Scott Hardy:                          Exactly. So, you know, Kellogg’s and the attorneys and the plaintiffs have said, okay, yes, we agree to this. This is a good settlement for consumers. Let’s get it done. Now it goes to the judge, judge will review it and give it their stamp of approval. Once that happens, in the next couple of months, we’ll get an update and we’ll post an update to our website with the details of when you can submit a claim, how much you can actually expect and ideally you’ll be the, you know, that should happen in the first quarter of 2020.

Farron Cousins:                  Well, fantastic. So everyone paying attention to this, make sure you go to the link in the description of this video. This is probably one you may want to bookmark if you purchased these cereals or breakfast bars, come back to it. I’m sure we’ll do a follow up segment once this settlement is approved, but in the meantime, make sure you sign up for the Top Class Actions newsletter to stay on top of this story and so many others. Scott Hardy with Top Class Actions. Thank you very much for talking with us.