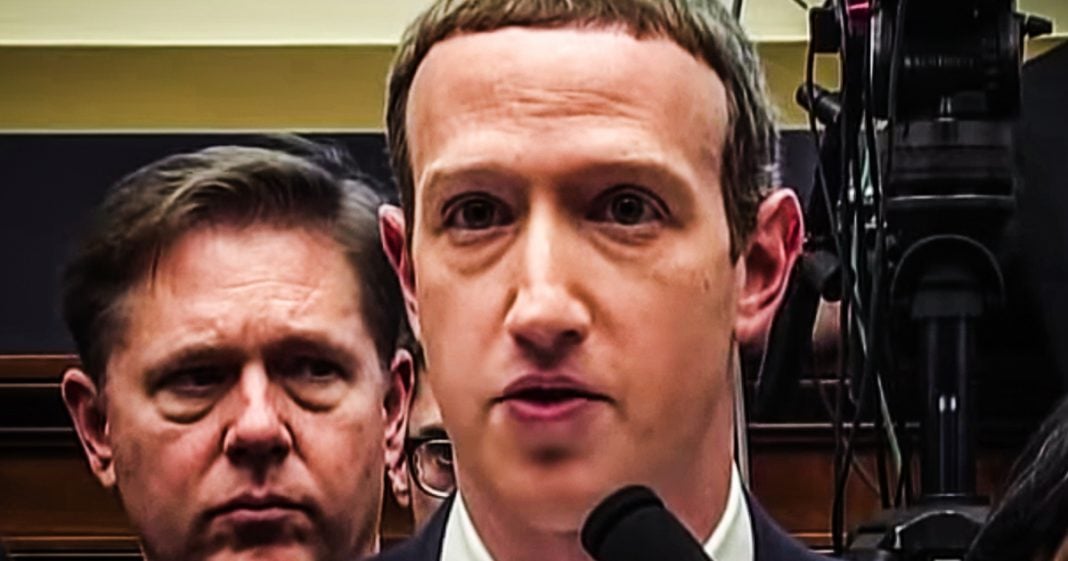 According to new reports, Facebook staffers offered up a host of solutions to Mark Zuckerberg that would have fixed the platform’s credibility problems while also limiting the amount of misinformation and lies shared on Facebook. Zuckerberg refused, mostly because the money coming in from political ads – even those with blatant lies in them – was just to sweet. Ring of Fire’s Farron Cousins discusses this.

*This transcript was generated by a third-party transcription software company, so please excuse any typos.
A couple hundred Facebook employees have sent an open letter to Facebook CEO, Mark Zuckerberg, explaining to him how his company could very easily fix the massive misinformation problem that they have. You see these 250 plus Facebook employees are not happy with Zuckerberg. His decision to just let whoever wants to buy an ad, buy an ad, say whatever the hell you want. Even if we know it’s fake and false, you give us the money, you’re good to go. And for a lot of employees at Facebook, unlike Zuckerberg, they still have a moral compass, right? They have a conscience and they know that this is bad. And so they sent this open letter to him where they spelled out very clearly what Zuckerberg could do to crack down on the misinformation from the platform he created by stealing it from other people. Um, here is what they had to say. Don’t accept political ads unless they’re subject to third party fact checks. That seems pretty obvious. Use visual design to more strongly differentiate between political ads and organic non ad posts, which is also a problem. You have a lot of ads on Facebook that tried to disguise themselves as regular posts. They want that cleared up so people understand what they’re looking at. Restrict micro targeting for political ads, including the use of custom audiences. Since micro-targeted hides ads from as much public scrutiny that Facebook claims keeps politicians honest. Now that’s a big one. Believe it or not, because, yeah, Facebook has been out there claiming Zuckerberg has been claiming that, no, no, no, no, no, no. See, we can let these things happen because the audience is going to, you know they’re going to correct it and they’re gonna to set everything straight, except when you micro targeted and you’re only targeting conservatives instead of liberals or liberals instead of conservatives, then that one group is going to have their own confirmation bias. See something that isn’t true, but they’ll believe it because it fits into their beliefs. Employees want this stopped. And I agree with them on everything. Observed pre-election silence periods for political ads to limit the impact and scale of misinformation. Brilliant. Limit ad spending per politician or candidate with spending by them and they’re supporting political action committees combined. Love it. Make it more visually clear to users that political ads aren’t fact checked. Awesome. Every one of these things that they have listed in this letter is brilliant and Facebook responded by saying, we remain committed to not censoring political speech and we’ll continue exploring additional steps we can take to bring increased transparency to political ads. That’s what they did to the letter. That was their a central response to it to just say screw it. We don’t care. We don’t care what we do. We don’t care if we’re poisoning the well of public discourse. Give us the money cause that’s all Facebook’s about folks. This isn’t some little happy, friendly social media site where you go to, you check up on your friends and family you haven’t seen since college and you tell them, Oh look at this picture of my dog. Isn’t it so great? No its some moneymaking operation that doesn’t care if they misinform you. If they allow something to blatantly lie to you and influence your political beliefs, as long as they get paid, they don’t care. Facebook is no different than any other corporation on this planet. Your Exxons, your Pfizers, your JP Morgans. At the end of the day, they’re run by people who are motivated by one thing and one thing only money.