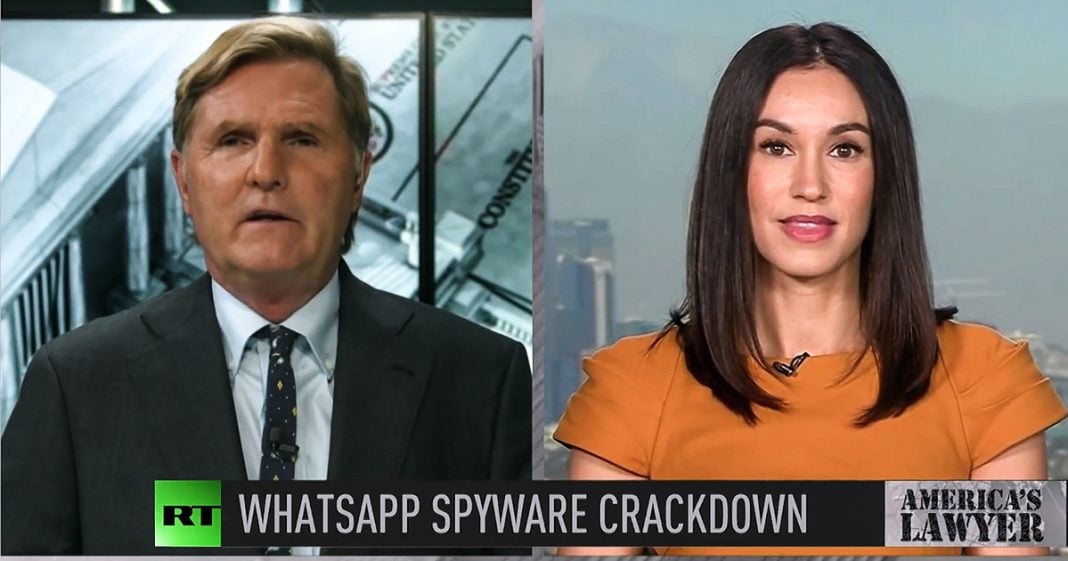 Via America’s Lawyer: RT correspondent Brigida Santos joins Mike Papantonio to explain how the popular messaging service WhatsApp and its parent company Facebook are filing suit against an Israeli surveillance firm called the NSO Group for planting spyware to monitor journalists and government officials using WhatsApp among other platforms.

Mike Papantonio:             WhatsApp and it’s parent company Facebook have sued in Israeli tech company for installing spyware on user’s phones and violating people’s privacy. RTs Brigida Santos joins me now from Los Angeles with that story. Brigida, what are the details of this, of this story? We’re getting bit, you’re hearing bits and pieces of it, but give me some details here.

Brigida Santos:                   Well, Mike, WhatsApp and Facebook, as you said, have sued an Israeli surveillance technology company called the NSO group in California federal court for allegedly installing spyware on user’s phones in violation of their privacy, which is kind of ridiculous because Facebook has their own privacy issues. But anyways, this cyber attack reportedly targeted 1400 WhatsApp users, including human rights lawyers, journalists, political dissidents, diplomats, and even government and military officials in over 20 countries. Investigators were first alerted about the issue after NSO’s flagship spyware known as Pegasus was discovered on the smartphones of infected users.

The malware was reportedly installed by making a WhatsApp call to the victims who did not even need to answer the phone to become compromised. After Pegasus was installed, it then contacted servers controlled by its operators and sent back victim’s data, including their passwords, contact lists, calendar events, text messages, and even voice calls that they had made through other apps.

Mike Papantonio:             Well, it sounds to me like almost a doxing. I mean, okay, first of all, who are they going after? They’re going after journalists. They’re going after political dissidents that, that disagree with what Israel is doing whatever the situation may be. They’re going after even ambassadors. They’re, this is, this is spying at its very worst. This is the kind of thing that we’ve talked about on this show where in the church hearings that we discovered that the FBI, the NSA and the CIA had been doing this type of thing on Americans on a regular basis and they still are. It’s still going on, but now they’re caught red handed. So this is the NSO here. Tell, what can you tell me about this NSO group? Give me a little background here.

Brigida Santos:                   So they’re an Israeli company. They’re defendant, the defendant’s known clients currently include government agencies in Bahrain, the United Arab Emirates and Mexico, as well as some unnamed private entities, which I’m sure we’ll be learning more about in the coming weeks. WhatsApp says that NSO profited from the manufacturing, distribution and operation of surveillance technology that’s designed to intercept and extract information and valuable intelligence from almost any device. Now, NSO group technologies is an Israeli cyber intelligence firm.

The Israeli government denies any involvement in the groups alleged global hacking, but the groups founders are widely reported as ex members of the Israeli defense forces most important signals intelligence gathering arm known as Unit 8200. In a statement NSO says the sole purpose of our company is to provide technology to licensed government intelligence and law enforcement agencies to help them fight terrorism and serious crime. Our technology is not designed or licensed for use against human rights activists and journalists.

Brigida Santos:                   That’s what they’re saying, but also they’re lying because in 2017 citizen lab revealed that independent investigators who were looking into the disappearance of those 43 students in Mexico who are now believed to be murdered, that those people were targeted for surveillance by NSO’s Pegasus spyware. This spyware was also reportedly used to track the Saudi dissident Jamal Khashoggi’s smartphone before his murder last year. So they can say that they’re not using their technology on these people, but they clearly are.

Mike Papantonio:             It’s a story that is going to keep getting worse because you know what, the American public has become very comfortable with the idea that it’s okay for you to know everything about my social security number, what I had for dinner last night, who I date, or where I’m traveling. That seems to be the norm in America right now. Thank you for joining me, Brigida. Okay.