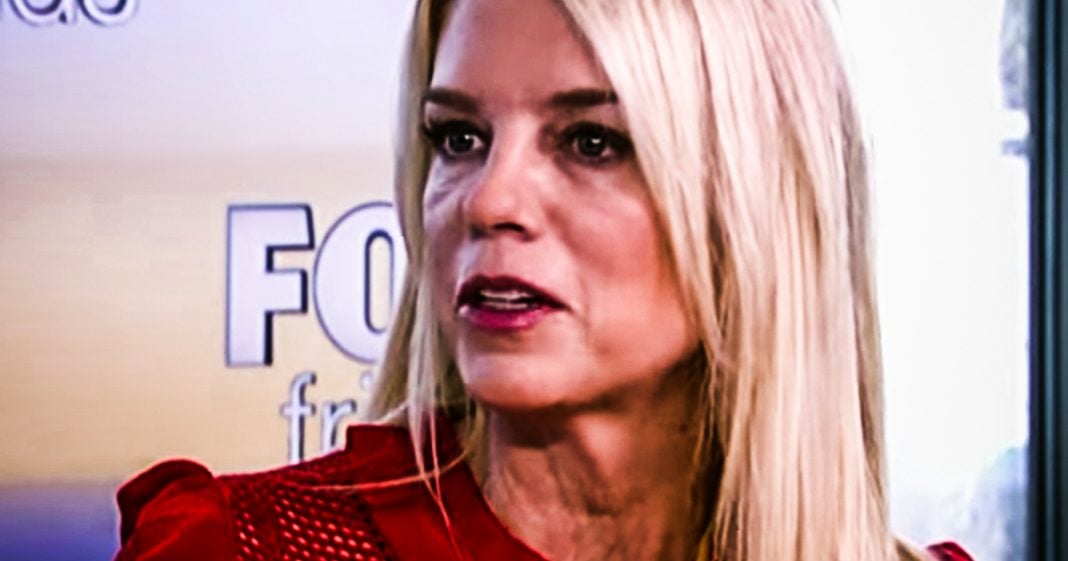 Donald Trump has hired former Florida Attorney General Pam Bondi to be a part of his impeachment response team, a move that has already raised lots of eyebrows across the country. Trump donated $25,000 to Bondi shortly before she decided to NOT pursue charges against Trump University in Florida, leading many to believe that there was a “quid pro quo” between the two. Ring of Fire’s Farron Cousins discusses this.

Donald Trump has been criticized by Republicans who have been openly worrying about the fact that he has not formed any kind of impeachment response team. Well this week Donald Trump decided that it’s time to form this team and he’s doing it by appointing a woman that he likely bribed to kill an investigation in the Trump university and that woman is former Florida attorney general Pam Bondi. For those who aren’t familiar with the story, here’s how it worked many years ago here in the state of Florida as Pam Bondi was attorney general running for reelection as attorney general. She was investigating Trump university for marketing fraud, basically telling students, you’ll be able to do all these great and wonderful things after you leave here. And none of it was true. Students paid a lot of money for basically nothing. And so there were these massive investigations.

We’ve discussed them in the past, and Pam Bondi here in Florida was leading up the charge here and Donald Trump swooped in, gave her campaign a check for $25,000 in literally a few days later. Bondi decided, you know what, I don’t think there’s anything to see with this investigation. We’re gonna close it down, ok we’re talking about less than a week after Donald Trump gave her $25,000. Bondi said, cool, this investigation’s over. You didn’t do anything wrong. Meanwhile, investigators up in New York just last year finalized a $25 million settlement for students who got ripped off by Trump university. But Bondi was more than happy to let all those, uh, people ripped off in Florida go down the tubes because she got $25,000 from Trump. And now he’s having her as part of her impeachment response team. So her job is going to be assist on communications and bolster the administration’s impeachment strategy.

In addition to other quote special projects, they announced special projects. So we don’t know where those are going to be, but we do know Bondi is a former AG has experienced in investigations, has experienced as a prosecutor. So I wonder what those other special projects are going to end up being. Maybe they want Bondi to come along and launch an investigation into some of Donald Trump’s rivals, because that wouldn’t surprise me one bit. Trump has had high praise for Bondi over the years. In fact, back in 2017 he even said that he would love to appoint her to anything in his administration, but you know, would have had a hard time getting through the Senate for confirmation because of the bribery that took place here in the state of Florida. And honestly, folks, there really is no other way to explain that. He gives her $25,000 less than a week later. She drops the investigation against him.

Now, to me, that kind of sounds like quid pro quo. So I guess Pam, Pam Bondi might be the perfect person to serve on Trump’s impeachment response team, because if there is anybody who knows about quid pro quo and Donald Trump, it would certainly be Pam Bondi.