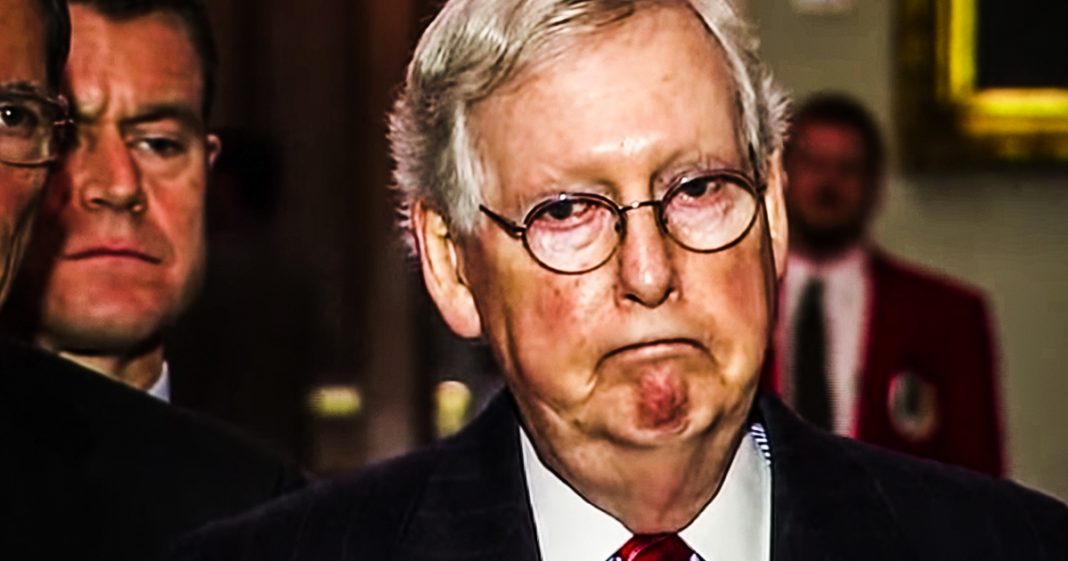 The Kentucky GOP has filed a complaint with the Federal Elections Commission, alleging that a Democrat challenging Mitch McConnell for his senate seat is in violation of the law because he promoted his potential candidacy on his radio show. Because he is paid to do a radio show, the GOP alleges that this is a violation of campaign finance laws. This isn’t a path that the GOP wants to go down, as Ring of Fire’s Farron Cousins explains.

The Republican party in the state of Kentucky understands that Mitch McConnell was facing a very tough reelection campaign and as such they have decided to try to take out one of his potential democratic challengers, man by the name of Matt Jones. Now Matt Jones is a radio host in the state of Kentucky. He hosts a sports talk radio show on iHeartRadio and he’s written a book that is anti McConnell going to be published by Simon and Schuster and he’s about to go on a book tour, but he’s also formed an exploratory committee because he might, Might run against Democrat Amy McGrath in the democratic primary and then hopefully according to him go on to challenge Mitch McConnell for the Senate seat. So the Kentucky GOP filed a complaint with the federal elections commission, the FEC to say that because Jones talked about a potential run on his radio show that is paid for by a corporation, that that is somehow a violation of campaign finance laws. They’re trying to say that this is an in kind campaign contribution.

They’re also saying the same thing about Simon and Schuster because they’re going to pay for him to go on a book tour for his anti McConnell book, and so if they’re paying for his book tour and then he runs for governor or or a Senate seat, then they’re kind of basically giving him these in kind contributions that exceed the legal limits. It’s illegal, blah, blah, blah. So he can’t do any of this. You got to kick them out of the race. The Kentucky GOP has just opened up a can of worms that I don’t think they ever meant to open. iHeartRadio has now actually pulled Matt Jones off the air because they’re afraid and I think because they want the issue to die. And I think because they also understand the can of worms that was just open.

But I encourage the Kentucky GOP to run with this. Keep going. Challenge it. Take it to court and here’s why. If they were successful, do you know what that would mean? That would mean that rush Limbaugh. Sean Hannity, every single person at Fox news, Breitbart daily caller, daily wire. Ben Shapiro in general, Charlie Kirk, um, all those groups would immediately also be shut down. But here’s why. I know a lot of people are like, what the hell? No, that’s not what that means. It does though. It actually does. Here’s how it would work. This man, Matt Jones was not even running for the office yet. He did mention it on his show. Sure. And he got paid to do his show. Absolutely. So does that count as an in kind contribution because you’re promoting a specific campaign in this case, his own, if courts were to say that yes, that is a contribution to a campaign, you’re, you’re violating the law.

That would mean that no Republican talker, no liberal talker could ever promote a candidate unless they were self financed. And even then you run into the issue of violating the campaign finance laws of personal contributions. So rush Limbaugh couldn’t go out there and promote Donald Trump or any other Republican candidates. Sean Hannity couldn’t do that. Tucker Carlson couldn’t, Ben Shapiro couldn’t and that would actually be pretty damn awesome for the media here in the United States ever since the 1980s when Ronald Reagan killed the fairness doctrine, which allowed equal time for both sides of an argument. The media has been skewed horribly towards conservatives, and they get their big money donors behind them and they fund their shows.

But if the Kentucky GOP wants to move forward with this case against Matt Jones, they’re gonna find out very quickly that it isn’t just limited to promoting your own candidacy while at work. They’re going to find that it’s anybody out there with the large platform promoting a candidate while being paid by someone else. That’s how that would work. That’s how that plays out in the court system. It’ll never go that far. Nothing will happen with this. Yes, Matt Jones has been pulled off the air and that’s ridiculous. He’ll be back. He hasn’t even decided if he’s running yet. But again, this is a can of worms that the Kentucky GOP wasn’t prepared to open, but now they’ve opened it and if it goes the way they originally wanted to, than a lot of conservative talkers could also be silenced as a result.