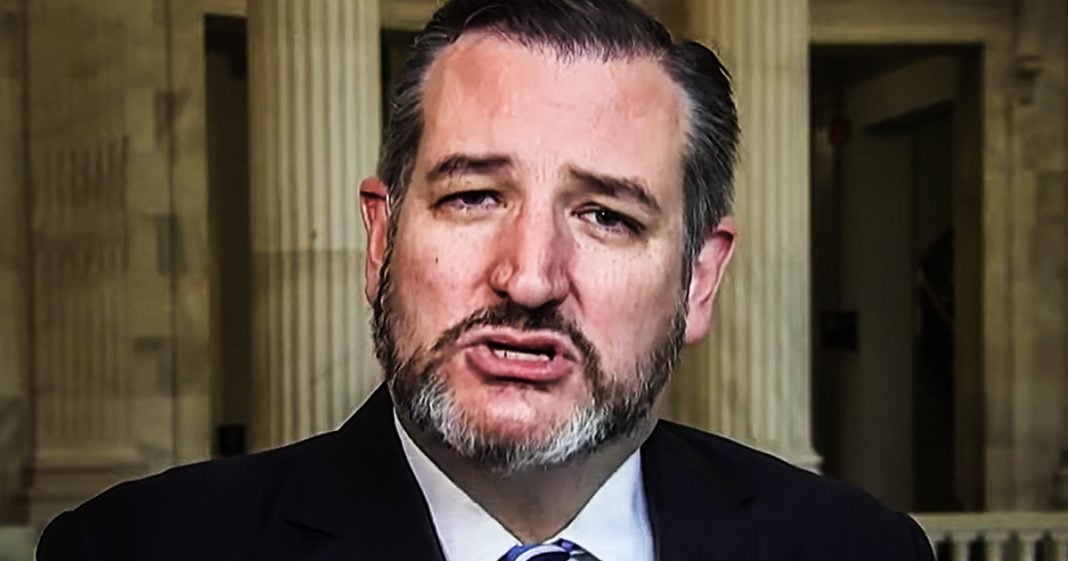 Republican Senator Ted Cruz recently penned an op-ed for FoxNews.com where he bragged about the fact that Donald Trump has been incredibly successful in packing the courts. Cruz claims that this move will protect Americans for years to come, but what has really happened is that both consumer and civil rights have been irreparably damaged for an entire generation or more. Ring of Fire’s Farron Cousins explains what’s happened.

Last week, Republican Senator Ted Cruz pinned an op ed for Fox news.com where he actually bragged about the fact that Donald Trump has destroyed an entire branch of the federal government. But of course, Ted Cruz doesn’t see it as destroying this branch of government government. He sees it as saving this branch of government, and of course I am talking not about the executive branch, but did judiciary. Here is how Ted Cruz began this very disgusting op-ed. Since January, 2017 president Trump has appointed and the Senate has confirmed 158 life tenured federal judges, including 20 who today serve in Texas, taken together the president’s nominees over the last three years have filled one quarter of the seats on our nation’s circuit court of appeals, and two of the nine seats on the U S Supreme court. Few legacies will be longer lasting than this judicial one.

These new judges are principled constitutionalists who have demonstrated excellence and professionalism throughout their legal careers. Now, that’s where I’m going to have to disagree with you, Mr. Cruz, because these are not legal professionals. These are not people who actually care what the constitution has to say. In fact, these are some people, some of them who the American bar association has said are not qualified to serve as judges, but you and your Republicans in the Senate put them in place anyway and then you all attack the ABA as if somehow they did something wrong. The judiciary is one of the most dangerous branches of federal government and one of the reasons it’s so dangerous is because only conservatives tend to pay attention to it. I’m sorry, progressives and liberals, but we as a whole don’t do a good job of paying attention to what’s happening in the lower courts. Conservatives do, and they always have, at least since the Powell memo came out in the early 1970s they knew what they were doing.

It’s been their plan for almost 50 years and for 50 years the democratic party has been whistling past the graveyard, only talking about the importance of the Supreme court, which hears about 150 cases a year. Ignoring the fact that tens of thousands of cases in this country every year are decided at that circuit court level where Donald Trump now controls 25% of the judges Obama left office with more than 100 vacancies in these areas. And yeah, sure you can blame it all on Republican obstruction if you’d like. You can also blame some of it on Obama for not doing recess appointments that Republicans couldn’t have objected to. He could have just done it in most instances and those people would be on the bench. Now he couldn’t do it with the Supreme court, at least not permanently, but he could have saved us from more than 100 Donald Trump nominees getting the final say on tens of thousands of cases per year.

Now, Ted Cruz believes that these judges he is helped put in place are gonna save democracy. He believes that they are going to increase our religious freedom here in the United States, that they are going to uphold the second amendment to the constitution. And beyond that he doesn’t care because they’re going to side with corporations as often as they can. And those same corporations are going to put money in Ted Cruz, his pocket and the pocket of every corporate as politician in this country. Meanwhile, our civil rights and our consumer rights in this country get set back for at least a generation because as Ted Cruz pointed out in his opening right there, these are life tenured judges there’s literally nothing we can do. There’s nothing we can do. And that is one of the worst feelings in the world, knowing that this happened, knowing that Obama helped let it happen, and don’t lie to yourselves and pretend that he didn’t and then knowing that there’s nothing we can do. Sure you could impeach them if they ever commit an actual crime.

But that would also require people to pay attention to these courts and pay attention to these judges and investigate them. And I’m sorry, but nobody in Congress is actually going to do that. So yeah, we’re stuck and we’re screwed for now. These people will be on the bench. Some of them are actually younger than me, and I still consider myself a fairly young guy. So there’ll be on the bench for 60 years. That’s not an overstatement either. Some of these people will serve longer than 60 years in these lifetime appointments. I’ll be dead before they retire. So we’ll most of the people watching this video here’s what we can do. We can start paying attention. Democrats can start paying attention to these courts campaign on the significance of these courts and stop acting like there’s only one court in this country that actually matters. Our civil rights, our consumer rights are environmental rights. All of those are going to be under assault for the next few generations. And here you got Ted Cruz right in his little op ed where he’s literally bragging about Trump destroying an entire branch of our federal government.