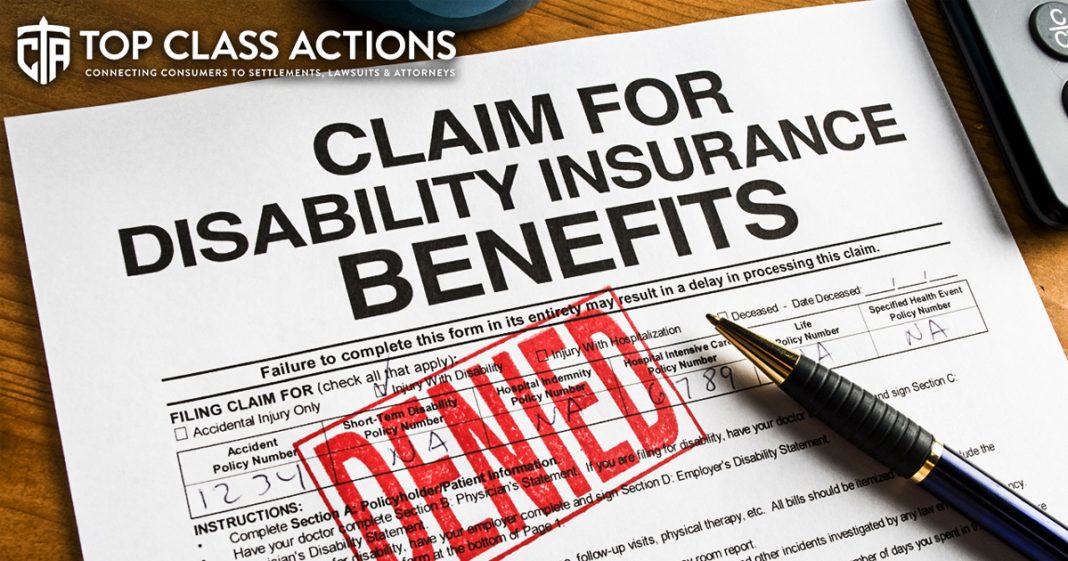 Long-term disability (LTD) insurance is purchased to provide income in the event that an individual is injured or disabled and needs to take significant time off work. If an LTD policyholder becomes disabled due to an illness, injury or accident, in most cases a long-term disability policy will pay 50 to 60 percent of the injured person’s income during the period in which he or she is unable to work. Ring of Fire’s Farron Cousins discusses this with Scott Hardy, the President of Top Class Actions.

Farron Cousins:                  Let’s be perfectly honest about something here. Insurance companies don’t make money by paying out claims. That is the sad reality that we have to live with. But unfortunately that doesn’t just mean denying a bunch of frivolous claims. Sometimes it also means denying claims that are fully supposed to be covered by insurance policies, but the company just decided they weren’t going to do it.

Joining me now to talk about one of the worst instances of this happening, which is with long term disability insurance, is Scott Hardy with Top Class Actions. Scott, this is a big one and I know we all see those commercials on TV saying, oh, come buy our long term disability insurance. Most people don’t even know what that is, but we see commercials for it and advertisements for it constantly. So lay this one out for us.

Scott Hardy:                          Sure. So people who are working for their employers have the ability a lot of times to get long term disability if they’re having a major health issue. This could be anything from severe asthma, back disorders, bipolar, heart attacks, you know, Hodgkin’s disease, irritable bowel syndrome, multiple sclerosis, obviously different cancer diagnoses. These are reasons that people will have to submit their claims for long term disability because they’re gonna be out of work and they’re hoping to get paid while they’re trying to recover from these illnesses.

And long term disability could be 50% plus back of the, of your actual paycheck. So, you know, that can help you be the difference between paying your rent or paying your mortgage and losing your home. But the, the issue is, is that a lot of times it can be a major, major pain to actually get the insurance company to approve you and insurance companies, we get a ton of submissions every single month from, from our viewers that said, hey, I, you know, I thought I have a great insurer. You know, you’ve got big insurers like MetLife and Aetna and Cigna, you know, billion dollar insurance companies.

I submitted my claim and they denied me. What do I do? Well, it’s important that if you get that denial letter that you get in touch with a lawyer and talk to them to see what your options are because you only have 180 days. If you get denied you and you just wait 180 days, you may very well lose your claim for that long term disability. So it’s important to stay on top of it. And even if you haven’t been denied yet, it’s not a bad idea to talk to a lawyer to help you get your claim filed and ensure that you actually get approved and get paid.

Farron Cousins:                  And I, I don’t want to, you know, sit here and defend insurance companies by any stretch of the imagination. But a lot of times, you know, when these initial claims are denied, it’s not the big CEO sitting there in a board room saying, deny that claim. Ha ha. No, I mean, these are, you know, typically lower level, you know, adjusters or whoever it is within the insurance company, they look at it, they look at the policy, they say, nope, I think I can get, I think I can decline this. No problem. They decline it, they move on to the next case. They’ve already forgotten your name. So that’s why it is important to get a lawyer because if a person were to try to appeal this on their own and go to the higher ups, that’s going to take a lot of your time.

It’s going to take a lot of your effort and you have much less of a chance of being successful in getting that overturned than if you went to an attorney. Somebody who, who knows this, they do it for a living, they do it every day. They know how to get around this. They probably like most attorneys, they know exactly who to call. They know the person by name at a lot of these insurance companies, they’ve worked with them a lot, they’ve dealt with them a lot, and they can get this handled so much faster and far more successfully than a person trying to do this on their own.

Scott Hardy:                          Exactly. Your, your claim can be denied for any number of reasons. It could just be a simple paperwork issue and if that’s the case, hopefully the insurance company will tell you what to do to fix it so you can actually get approved. But it could just be a denial because they don’t feel that your illness is severe enough and, you know, you might need that attorney to sit there and, and fight for you to get you paid. You know, I, I’ve had friends that have made their claims for long term disability and gotten, gotten approved, had no problems, and I’ve had friends that have been denied and have had to sit there and fight for six plus months and, and looping in an attorney to get approved and then get a big check to cover all of those expenses that they lost due to the long delay in getting paid. But, you know, these insurance companies will look for any reason, even a typo on your claim form to deny your claim and you, you know, you’ve got the insurance, use it, get paid, don’t let it go to waste.

Farron Cousins:                  Exactly, and again, you know, that’s why these professionals, these lawyers out there, you have plenty who strictly deal with these kinds of claims, you know, against the insurance companies for disability benefits. That is their specialty. That’s what they do. And again, I’m not kidding about these lawyers. They know exactly who to call. They know the person. They’ve memorized their phone number at a lot of these insurance companies. I had an issue here, you know, with, with, with the firm that I’ve worked with where I went to one of the attorneys after a car accident and he said, okay, we’ll hold up, let me call. Knew the guy right off the bat. Said, hey, you know, how you doing? I got this guy here.

So again, they know these people, they deal with them all the time. That doesn’t always mean they’re going to be successful, but they know the ins and outs better than anyone else and they can help you with these problems. And again, that’s what most of them, you know, only do. They stick to this because this is a big deal and it is very common for people with this long term disability insurance to be denied. Not saying that all of them do it all the time, but it’s common enough to where this has become its own, essentially its own practice of law at the moment.

Farron Cousins:                  Absolutely. For more information about this particular issue, please follow the link in the description of this video head on over to Top Class Actions, and of course while you’re there, make sure you sign up for their weekly newsletter. Scott Hardy, Top Class Actions, thank you very much for talking with us today.