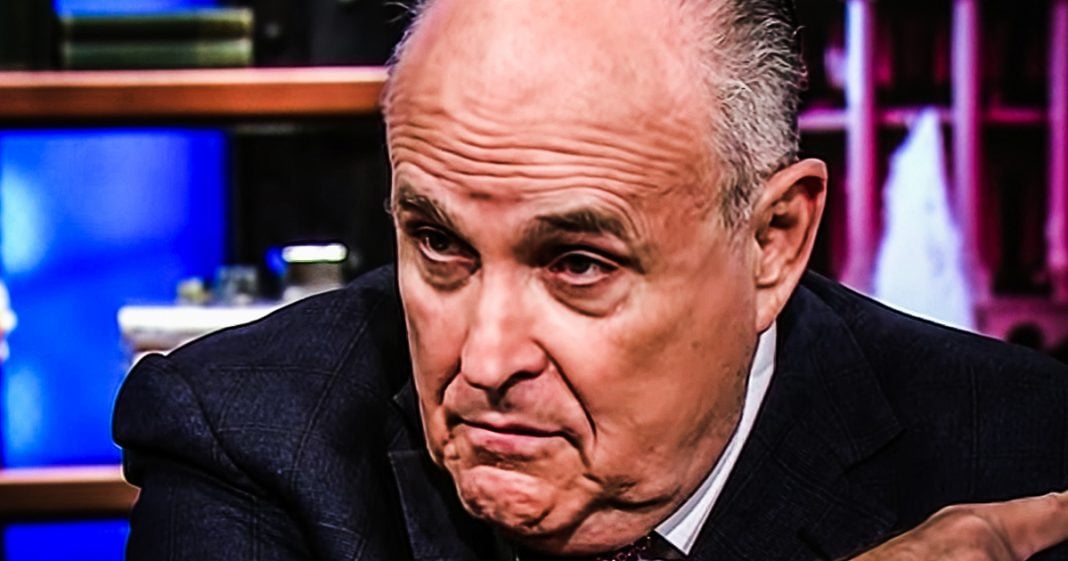 Rudy Giuliani has had a tough time finding a decent law firm to represent him in the Ukraine scandal, and after a series of rejections he finally found someone willing to defend him in court: his former intern. Robert Costello, Giuliani’s new representation, interned for Rudy at the US Attorney’s office in Manhattan years ago, and he believes that he can help save Rudy from what’s coming. Ring of Fire’s Farron Cousins explains what’s happening.

If you are a defendant in a criminal trial, say you’ve been accused of any kind of crime you can imagine, right? Big, small, whatever it is. You’re sitting there and you’re thinking, Holy crap, I’m glad I’ve got a good attorney next to me who’s going to defend me in court and hopefully get me off the hook for this. And then imagine your attorney comes up to you. It says, Hey, uh, got good lawyers cause I need to hire a couple for me because apparently this crime you did, I’m also a accomplice. So God give my own lawyers now. Oops, that’s exactly what happened with Rudy Giuliani and Donald Trump and Rudy Giuliani according to reports, has been struggling greatly to find any attorneys willing to actually defend him. And Giuliani is a guy who knows a lot of lawyers all across the country. He was a us attorney. He was a mayor of America city, right? New York city. He knows lawyers, he knows law firms, he knows judges, he knows everybody that could possibly go out there and defend him.

And yet everybody he approached originally said, no, Rudy, I’m not getting into this bud. And according to reports, a lot of the reasons had to do with the fact that Rudy Giuliani is volatile. He’s out there making it worse for himself by saying stupid things, both in social media and on corporate media. He’s implicated himself further. Every time he opens his mouth and no attorney, no matter how good they are, would be able to actually defend this. He is a liability But Rudy found someone, he finally found someone willing to go into court or in this case most likely a Senate trial and defend him from the things he’s being accused of. And that person, unfortunately for Rudy, happens to be his former intern, a man by the name of Robert Costello. Now our Castello interned for Giuliani back when he was working at the Manhattan us attorney’s office. So Costello is not a young kid. He’s been around for quite a while. It’s been a long time since Giuliani was in that, uh, us attorney’s office.

So Costello knows what he’s doing at this point, but unfortunately you interned for Rudy Giuliani, so that’s the guy who you’ve modeled your career after. The guy you now have to defend. No, we don’t need a little clone of Giuliani out there trying to defend Giuliani, but that’s the best he could get. I have a prediction. I don’t even care if it comes true. I just want to say it. I would like to think that at the end of all of this, the impeachment inquiry Giuliani buddies getting sentenced, then Giuliani himself having to go through whatever charges get leveled against them. I would like to see him not in prison. I would like to see him disbarred. I would like to see him never be able to try another case. Never be able to go into a courtroom again unless it was as a witness or a defendant and I would like to see his entire legacy his entire career come crashing down around him and then. Then he can go off into the sunset and disappear. I don’t want him to go to jail. I would rather him live as a free man with his shame and his failure hanging over his head every second of every day.