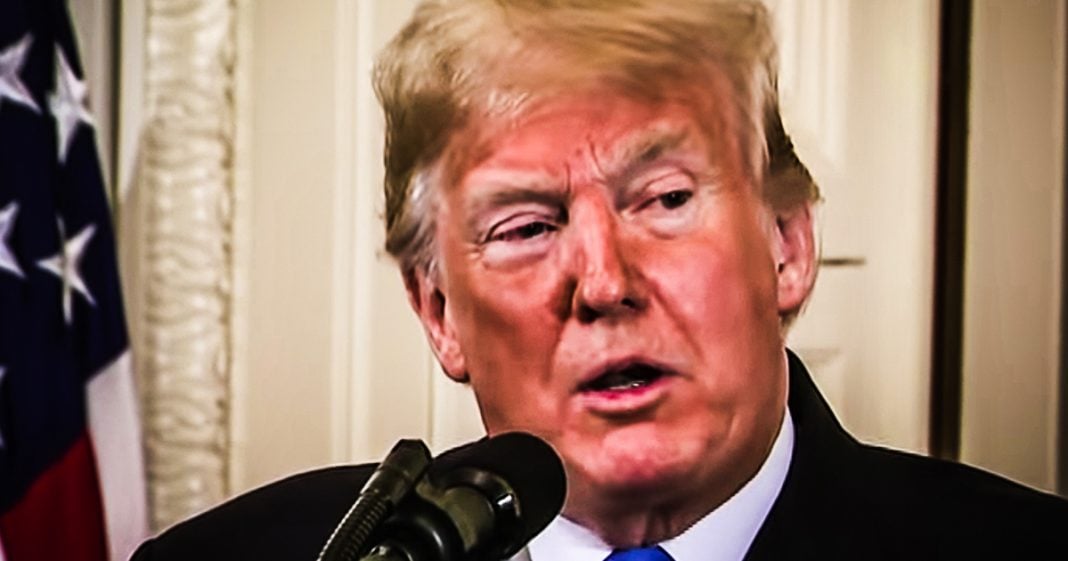 According to a new report in The New York Times, Trump’s aides had considered asking Twitter to put a 15-minute delay on the publication of Trump’s tweets in the early days of his presidency, but ultimately decided that they wouldn’t ask the company for this special treatment. They came to accept the fact that the President can’t be trusted on Twitter, but that isn’t even the most embarrassing part of the story. Ring of Fire’s Farron Cousins discusses this.

According to a new report in the New York times, Donald Trump’s aides in the very early days of his administration had actually considered going to Twitter and asking them to put a 15 minute delay on all of Donald Trump’s tweets. Now, the reason they wanted this is because they wanted to have the time to go through, maybe make some changes, make some edits, correct some lies if they needed to or just Polish them up a bit. You know, maybe if they had done this, which they ultimately decided not to do because they were afraid that the press would find out or that Trump would find out. But if they had done this, maybe we wouldn’t have COFEFI. Maybe we wouldn’t have all of these other ridiculous tweets that the president has sent out. This could have actually been a good idea and something that saved the president from a lot of embarrassment and maybe his approval rating would be higher than 42% if we had a 15 minute Twitter delay, but again, the aides eventually decided, no, you know what, the press is going to find out about this. They’re going to tear us apart. Presence going to find out about it. He’s going to tear us apart. We just can’t do it. But that’s not even the most interesting part of the story. The most interesting part of the story goes to Donald Trump’s vanity because apparently the man as he’s, you know, in his seventies now, it’s understandable. He has trouble seeing, you know, so he has to wear glasses, according to the report when he tweets and he doesn’t want people to see him wear the glasses. So he never tweets in public. Instead he has a communications director, Dan Scavino or, or a social media director, excuse me, Dan Scavino and he dictates the tweets to Scavino and Scavino then tweets it out. And sometimes Scavino helps to ghost write Donald Trump’s tweets. And the report says he prints them out in very, very large letters to hand to the president so that he can read them without having to put on his glasses. Um, the president would rather not be able to do his favorite thing in the world, which is tweet out stupid things then to have anyone on this planet see him wearing glasses. He is a senior citizen, senior citizens, human beings in general. Folks, as we get older, our eyes get worse. We can do our best, we can take care of them, but eventually as all parts of the human body tend to do, you get wear and tear. Things start breaking down. They don’t work quite like they used to. That’s why glasses exist and it’s nothing to be embarrassed or ashamed about, but the president has such a fragile ego that he refuses to anybody in this country see him wearing those glasses. That’s a level of vanity I didn’t think we’d get from a US president. Now there’s a difference, right? Because I’m sure Republicans are going to say, well, FDR wouldn’t allow photographs because he couldn’t walk. Yeah. Here’s the thing. We are in the middle. I don’t know if you know this. We were in the middle of a pretty big war back then, and FDR was actually concerned about the fact that if the enemy’s, the adversaries out there knew that the president of the United States couldn’t walk, that might be perceived as a weakness, and they may use that weakness against us. Trump doesn’t want people to see him wear glasses. Well, he tweets. FDR didn’t want our enemies during world war II to know that he was crippled. If you can’t see the difference between those two, then there’s literally no way to help you.