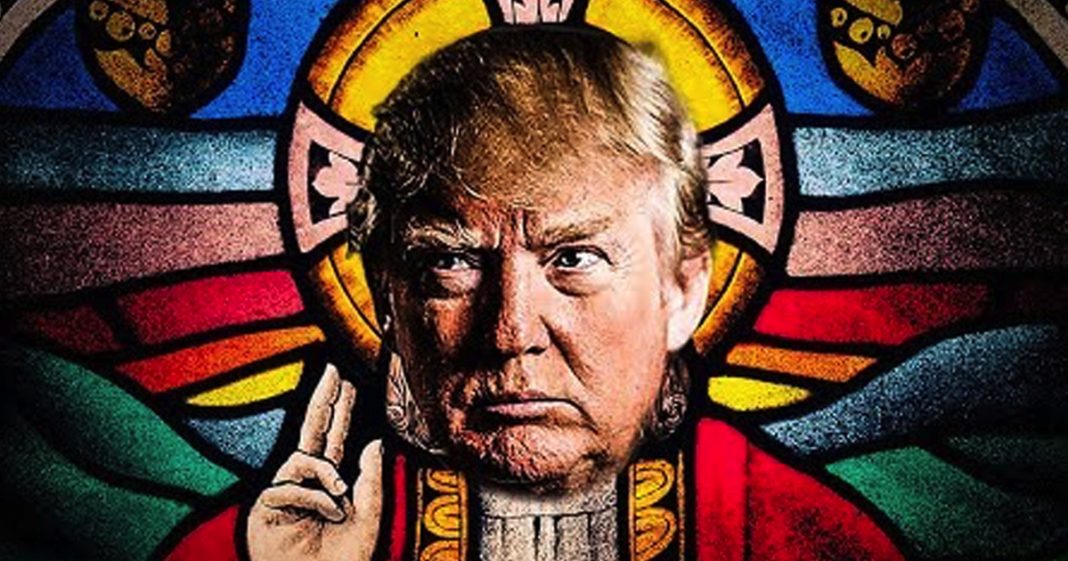 A common feature of cults is that the members always believe that their leader is infallible, and there’s nothing that could happen that would shake their faith in that leader. According to the latest poll numbers, that perfectly describes Donald Trump’s followers, as a disgustingly large majority of his followers say that there is NOTHING he could do to lose their support. Ring of Fire’s Farron Cousins discusses the Trump cult.

A new Monmouth university poll came out proving without a doubt that Donald Trump’s supporters are in fact a Cult. This new poll shows that 62% of Donald Trump’s supporters say that there is nothing the president could do that would cause them to not support him anymore. It doesn’t matter if there is a quid pro quo, 62% say we support him. Didn’t matter. If he had colluded with the Russians, they would still support him. It probably wouldn’t matter if he was out there performing an abortion while gay marrying a couple. They would still support them. Actually. You know what? I think they might not support him if he were to do that. But you get the point and here’s the thing. This is what cult members do. They create a false God and whoever their cult leader is, they believe that said leader is infallible and everything they say is right and everything people say against them is wrong. They will not waiver in their support of the cult leader no matter what. They ignore the reality around them in order to put all their faith and all their trust into the cult leader. That’s how cults work. And that is exactly what they have done with Donald Trump. Now, to be fair, you see this on the left as well. I mean there’s plenty of Twitter bios out there that have the hashtag still with her floating around. You do have people who have a godlike obsession with Bernie, with Warren, with Buddhajudge, with yang, probably more than anybody with Tulsi, with Kamila, probably not Joe Biden. I don’t know how he’s polling so well cause you really don’t see Joe Biden supporters out there. But anyway, yeah, there are people who do have these godlike worship, uh, characteristics of these other candidates too. But nowhere near the level that you see with Trump, you know, one or two or three or four out there, that’s an outlier. That’s just somebody who thinks that everything hinges on their candidate. This is a majority of people who say they approve of the president. And that’s a problem. That’s a very large Cult. And it also tells us that 62% of these people say there’s nothing he could do to make them not support him, that these people are unreachable. I know Nancy Polosi was out there scolding Progressive’s this week, telling us that, Oh, you got to worry about electoral college and you got to be able to win in the Midwest. Yeah, we know we’re going to win with policy, but some of these folks, the folks that these centrist corporate as Democrats thinks we can sway. We can’t. They are in fact a lost cause. They are a waste of time. There’s some Trump supporters. They, yeah, they could flip if you give them a good enough policy and a good enough reason to. But for these other folks, the 62% of the 48% who support him, they’re unreachable. And we shouldn’t waste our time scaling back progressive policies to appease people who will never vote for Democrats regardless of what they have to offer.