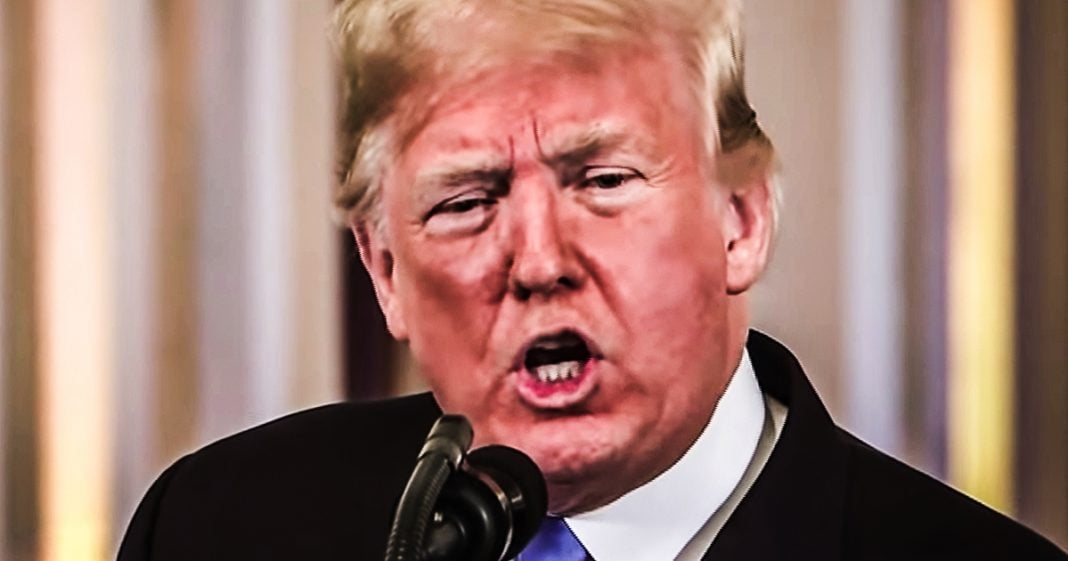 On Thursday, Donald Trump threw one of his famous Twitter tantrums, claiming that the entire impeachment process has been a sham and that he doesn’t even get a lawyer. What he’s trying to do is mislead the public about the actual rules that govern these kinds of proceedings, making himself out to be the victim instead of the accused. Ring of Fire’s Farron Cousins explains what’s happening.

*This transcript was generated by a third-party transcription software company, so please excuse any typos.
So next week, following the veterans day holiday, we will start to see public impeachment hearings in the house of representatives. And knowing that this is on the horizon, Donald Trump had a full blown meltdown on Thursday accusing the Democrats of stripping him of all of his rights as an accused individual here in the United States. This is what the president tweeted out. It was just explained to me that for all right, hold up. Before we even go any further, the fact that somebody had to come in and be like, Hey, okay, so this is what’s going to happen, mr president, we know you’re not, you know, up to speed on things. So anyway, that, that line, I’m sorry, it just jumps out as me. It at me is pretty funny here. So anyway, it was just explained to me that for next week’s fake hearing trial in the house as they interviewed, never Trumpers in other eyes get no lawyer and no due process. It is a Pelosi shifts scam against the Republican party and me, this witch hunt should not be allowed to proceed. All right. So aside from the fact that he didn’t know what was going to be happening, every other word in that tweet was an absolute lie. He said this was a trial. This is in fact not a trial. These are hearings. These are depositions. This is an investigation. So no, mr president, you’re not losing any due process because you really don’t have much right now in an investigation. You as the accused have the right to plead the fifth. You got the right to remain silent and that’s about it. Man. You don’t have anything beyond that right now because you don’t need anything beyond that right now. That’s how that works. Secondly, a Pelosi shifts scam against the Republican party and me. no, This is not a scam. Your own people, your own donor for God’s sake came out and said, yeah, there was a quid pro quo. To put another way, yes, there was extortion by the president of the United States. This is not a scam. It is not an attempt to undo the last election. This is the natural process that they, these things take. And if you did nothing wrong, you’ve got nothing to worry about. If all of these, uh, witnesses are liars, then that’ll come out in the wash. But they’re also not never Trumpers. You literally called a dude who gave you $1 million for your campaign and you rewarded him with an ambassadorship. You called him a never Trumper or this guy actually lied for you originally. And then he found out he was going to get in trouble for lying about you, protecting you. So we had to come back and say, well, well, dang, you know, I don’t want to get in trouble. I don’t want to go to jail. So I gotta tell you the truth. Now that’s not a never Trumper. Gordon Sunland did everything he possibly could to protect you until it looked like he was going to be the one getting in trouble instead. And I think we’re going to see a lot more of that. And I hope we see it on live TV next week. But what the president’s trying to do right now is to mislead and confuse the public. He’s trying to tell us that next week is the trial. It is not the trial. The trial will happen in the Senate assuming Mitch McConnell even lets it happen. That’s another scary part of this is Mitch McConnell has the authority to just say, Nope, we’re not going to do it. Case closed. That’s it. Nothing we can do about it, but this isn’t the trial. When the trial comes, you have the chance to have a lawyer. You have a chance to take the stand and defend yourself. You can tell your story, however you want to tell it. Until then you got to deal with it. This is how investigations worked, and I know it’s hard for somebody like you is never had to face consequences for his entire life, but this is what the rest of us have to go through. Even if we do something petty, something meaningless. Yeah. This is the justice system that most of the rest of the country has to deal with, so you better get used to it.