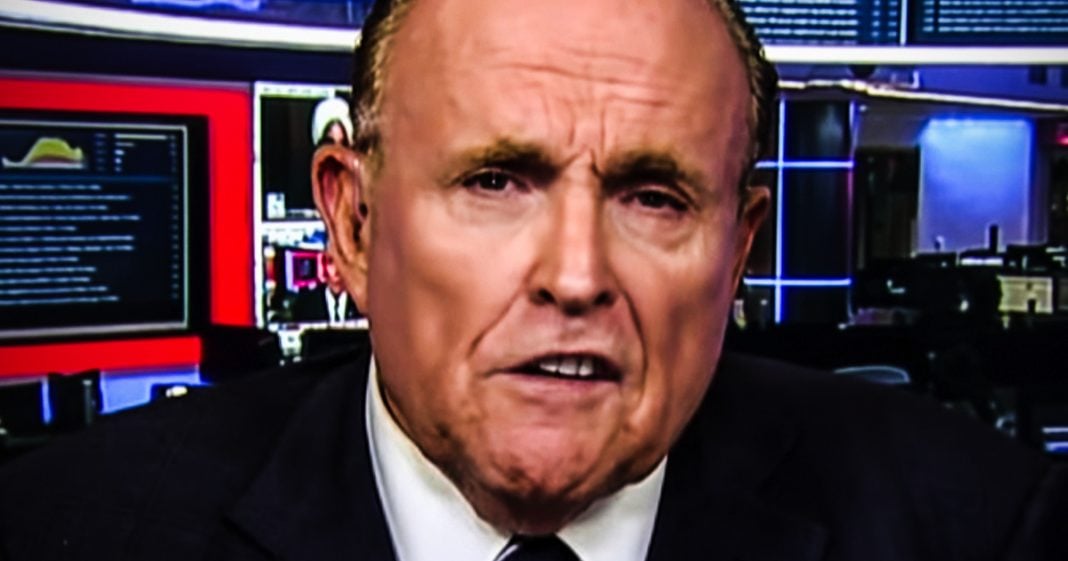 Republicans in the House of Representatives have finally found a strategy to deal with impeachment that they believe will play well with the public. That strategy is to blame the whole thing on Rudy Giuliani. House Republicans are going to try to paint Giuliani as a rogue operative, and all of the people who went along with the extortion plan were actually working with Giuliani and not Trump. Ring of Fire’s Farron Cousins discusses this.

*This transcript was generated by a third-party transcription software company, so please excuse any typos.
For weeks, Republicans in the house of representatives have been struggling to come up with a unified message to protect Donald Trump from the impeachment inquiry. They have reached out to the white house. They have begged them according to a report saying, give us the talking points. What do you want us to say? But now, this week, right before we head into the public impeachment hearings, next week, Republicans finally think they have come up with a plan that is going to save the president’s job. And that plan, which is what we and so many others predicted, is to literally throw everybody else under the bus. Starting with Rudy Giuliani, according to a new report in the Washington post, the new Republican plan is to center everything around Rudy Giuliani. And here’s why, because Gordon Sunland in his revise testimony where he did say there was a quid pro quo, he said that his orders were coming from Rudy Giuliani and he assumed, he assumed that those orders from Giuliani came from Trump. As in Trump told Giuliani, Giuliani told Sunland. And that’s where we ended up here. Republicans are trying to say no, no, no, no, no. Folks. Trump had nothing to do with this. Rudy Giuliani, Gordon Sunland, and probably even Mick Mulvaney, they’re saying acted on their own to pursue their own agenda because the three of them somehow had their own Ukraine policy. They were trying to make happen. Yeah, it doesn’t make any sense because Giuliani Mulvaney and Sunland, the three people, they’re saying they’re going to throw under the bus and pin it all on the, they don’t have any authority to do any of the things you’re saying they did. Right. Like to what extend would Giuliani want them to dig up dirt on Biden did. Does Giuliani just have a scrapbook of the Biden family and he just wanted to add it to it because Giuliani has no authority to enact any kind of official policy, nor does Gordon Sunland and neither did Mick Mulvaney. So how does this new conspiracy theory that it’s all Giuliani’s brainchild, play out Republicans? You didn’t think it through. Now you got up to the point where you said, okay, look, here’s a plan. Here’s what we could do. We can pin it on all these guys. Fantastic. What’s their motive? Cause you don’t have it. You don’t have a motive. You just have a plan to blame all these other guys in the second they come under questioning or Democrats or reporters or whoever it is, says, okay, well that’s an interesting theory. Why did they do it? Then suddenly you’re all going to be sitting there like Matt Gates with a dumb look on your face. Like, uh, can I just go to the bar now? Not how it’s gonna work folks. I applaud the Republicans for finally coming up with some kind of message and as expected, it’s just as dumb as everything else they have done. But to hit back on another main point here, Giuliani, we told you so bud, a lot of us told you so the second it looked convenient for them, Republicans were going to throw you under the bus and even though you are still technically the president’s attorney, it may be time for you to come forward and take the stand yourself and tell us what really happened. Because if you don’t, these Republicans, your so called friends are about to let you become the fall guy.