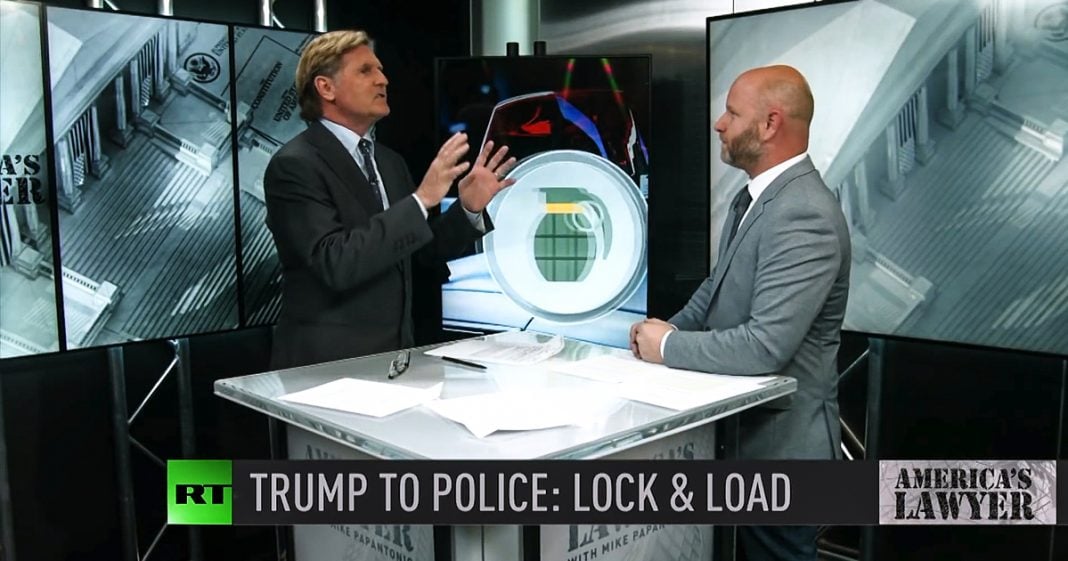 Mike Papantonio:             President Trump recently announced plans to send $600 million worth of surplus military equipment to local police departments, further militarizing our law enforcement agencies. Okay. Again, we did this story what, four or five years ago, we saw tanks being used by the police departments that were coming in under the government giving this stuff away at surplus.

Mike Papantonio:             And so we saw tanks, we saw M1, I mean, we saw 50 caliber mounted machine guns on some of this stuff. I mean, it’s crazy. Airplanes, helicopters. So what’s happening now is Trump has made this declaration, we’re at war with the cartel gangs. Okay. They’re coming into the United States. They’re not just on one side of the border. We got to run the gangs out of Chicago. We’ve got to run them out of LA and the FBI and the DOJ is now on it. What’s your take?

Farron Cousins:                  Right, and the American public loves these kinds of stories because they want to feel safe. Everybody wants to feel safe. And they think, okay, well if I give the local police department, you know, these armored Humvees, you know, so the SWAT team can take out the, it makes me safer. But really what it does is it allows these, you know, Rambo type police officers that we see in the news every other day, you know, shooting innocent people, sometimes shooting innocent people in their own homes, at this point. These are not the kind of people who need this high tech military grade weaponry, but Trump the other day said, we’re going to give you $600 million worth of this surplus military equipment in the next year. And we’ve already seen more than $5 billion in this equipment go over the last 20.

Mike Papantonio:             His talking point has always been the cartel gangs are coming in. They’re coming in from South America, they’re coming in from all over the country, flooding in the United States. Mollye Barrows and I are going to do a story on that a little bit later today. But the, look, we, it’s not just Trump. Okay. This did not start with Trump.

Mike Papantonio:             Trump is adding more money to it, but it’s 10th, it’s called the 1033 program, and that is, this is great for weapons sales. This is great for people who build tanks and really sophisticated weaponry and machinery because now the, the surplus moves to the, to the police department and then the military has to order more. So it’s that cycle that flows. It typically, typically goes from the, from the vendor to the military, to the police departments and now it goes, and it’s of course, it’s always gone vendor, military to third world countries. So now the, there’s, there’s money involved here too, right?

Farron Cousins:                  Right. Well, and the 1033 program actually mandates the department of justice, the Pentagon to, department of defense, excuse me, to send this weaponry to local police stations. They’re required to do it. And this is a bill or, or, or a resolution that essentially was written by the defense industry because it says, listen, you can’t keep our weapons indefinitely. Under the 1033 program, you have to send it to these police departments, which means you don’t have anything now. So you come back to us and buy more.

Mike Papantonio:             The talking points are exactly what you would imagine. He’s talking, the talking points are 50, another 50 people killed in Chicago. We got to go to Chicago and clean out the gangs because it scares the bejesus out of people. Anytime you talk about law and order and 50 people being shot, you know, you see it on the holidays.

Farron Cousins:                  Well, it didn’t destabilize them under Obama or under Bush or under Clinton. So it’s likely to not destabilize the bad guys today because again, as you said, this program was going on during Obama, during Bush, during Clinton. Nothing really changed except that we have seen a huge spike in the number of innocent people being murdered by police officers here in the United States, and that’s what’s going to happen here. The defense contractors are gonna make a ton of money. A lot of innocent people are going to get killed or injured because of this, because these police officers don’t even have training for this weaponry.