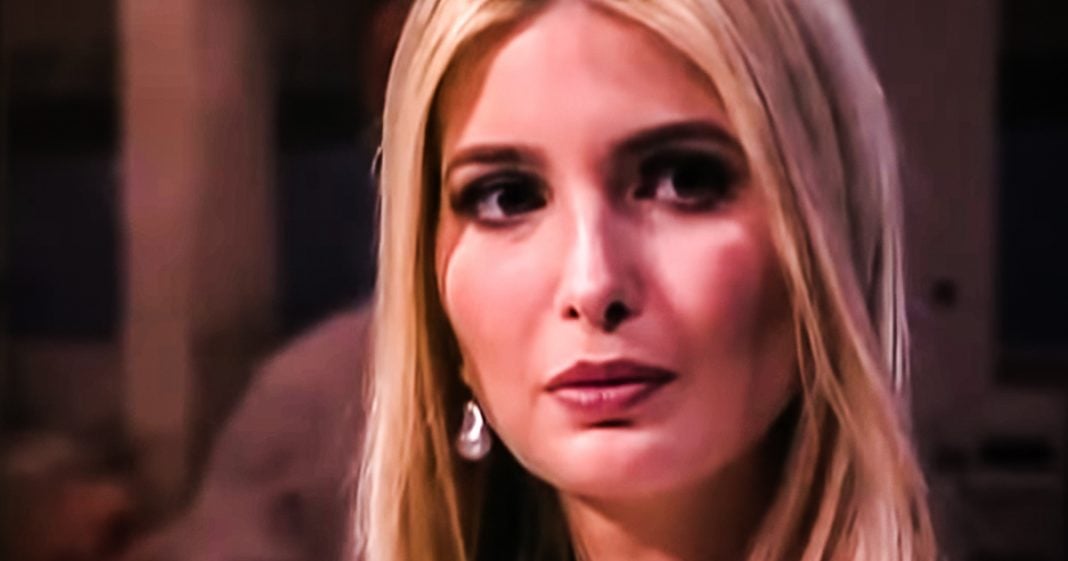 While speaking to reporters on Friday morning, Ivanka Trump appeared to break with the rest of her family by saying that the identity of the whistleblower isn’t relevant to what’s happening. If she had stopped there, it may have been a decent statement. But she then went on to question the whistleblower’s motives and then said that they didn’t even have firsthand information. So is she endorsing the people with firsthand information who say there was a quid pro quo? Ring of Fire’s Farron Cousins discusses this.

*This transcript was generated by a third-party transcription software company, so please excuse any typos.
Folks are remarkable thing happened this morning. Ivanka Trump came this close to saying something that was intelligen. man I was on the edge of my seat reading this article. When I saw the headline headlines said, Ivanka Trump says whistleblower identity, not particularly relevant. I thought, Oh my God, she’s breaking with her father. She’s disagreeing with her brother who tweeted out the alleged name and then here is what the associated press reported. Ivanka saying the whistleblower shouldn’t be a substantive part of the conversation. Very true. Awesome job. Ivanka just don’t keep talking anymore after that. Oh crap. She kept talking. The reason she believes he shouldn’t be as substantive part of the conversation is because quote, he did not have firsthand information. Basically since the election, this has been the experience that our administration and our family has been having the interest in overturning their results of the 2016 election and removing him from office. So rather than wait under a year until the people can decide for themselves based on his record and based on his accomplishments, this new effort has commenced, man. Ivanka, why’d you have to keep talking? You had it, you had it when you said he’s not, should not be a substantive part of the conversation. Boom in the sentence, walk away. Suddenly you look like you might not, you know, be as clueless as the rest of your family. But you just had to keep talking and you made it so much worse. You know, I’m often reminded of the fact that early on in the Trump administration, even before he got sworn in after the election, everybody was saying, no, no, no vodka is totally going to be the voice of reason. Right? She was going to be the one that was going to get us all those environmental initiatives. She was the one who was going to protect LGBTQ rights. She was going to do all these great things and keep her father a little more moderate. And she’s done nothing, she’s done absolutely nothing except enrich herself, which in and of itself should be investigated because that’s criminal and here she is trying to use the same talking points as other Republican’s. She started off awesome with that first line and then immediately went into the nonsensical BS that other Republicans are pushing. Impeachment does not undo the results of the last election. You want to know who did undo the results in the last election? That would be the electoral college cause Hillary Clinton won that popular vote by roughly 3 million votes. That was the election, or at least the one we should have. But we have ass backwards constitution that calls for electoral college and the electoral college then came along and undid the will of the American people. So you know, there’s that. There’s also the point that Ivanka was correct at first, as I said, cause the whistleblower is not relevant, but if she wants to complain, Oh well they didn’t have firsthand information. Okay. We’ve heard from people who did have firsthand information and they said there was extortion. So by your own logic, those are the people we should listen to and if those are the people that we listened to, then yeah, your dad’s in a lot of trouble. She doesn’t know what she’s talking about. She’s not good at this part of the job, which is politics. She much like her dad has done a lot of things she doesn’t want the public to look into and hopefully maybe after we’re finished with her father, with this whole impeachment thing, maybe it’s time to start looking into how she got all those Chinese trademarks. Maybe it’s time to start looking into why she has trademarks in China for Ivanka Trump sausages and Ivanka Trump voting machines. That doesn’t seem normal and they certainly don’t fit in line with other products she’s ever sold. So yeah, Ivanka if I were you, I’d probably sit this one out because the last thing you want is investigators shining a spotlight on you, let alone the fact that your husband is also pretty shady character and I’m sure Democrats in Congress wouldn’t mind investigating him as well.