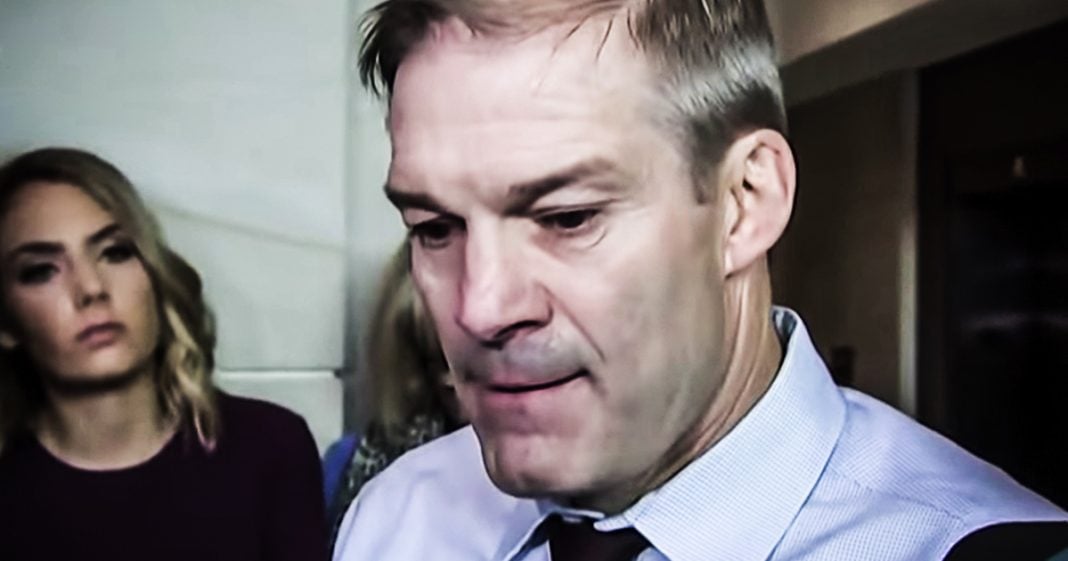 In a lawsuit filed on Thursday, a former referee for Ohio State University says that Republican Representative Jim Jordan was told of an incident where the team doctor performed sexual acts in front of students in the shower, but Jordan refused to take any action. Instead, Jordan just said “I know, I know” and continued to let the doctor harm the students he was charged with protecting. Ring of Fire’s Farron Cousins explains what these latest allegations mean for Jordan’s future.

*This transcript was generated by a third-party transcription software company, so please excuse any typos.
In a lawsuit filed yesterday a now professional referee who was a student at Ohio state university when Jim Jordan was there as an assistant wrestling coach in this lawsuit that has been filed. This now referee who is not named, says that he told Jim Jordan specifically about the fact that the coach or the team doctor, excuse me, Richard Strauss, the one who had been accused of performing sexual acts in front of the wrestlers and molesting these wrestlers, he told Jim Jordans specifically about an incident of this doctor sitting in the shower with him and masturbating. And Jim Jordan responded by saying according to the lawsuit, yeah, that’s Strauss. He didn’t tell anybody. He didn’t let the higher ups know. He didn’t warn other students to watch out for this doctor because he’s going to psychologically damage you for the rest of your life or he’s going to physically assault you. No, Jim Jordan just responded, yeah, that Strauss and went on with his day. This is now the second person to come forward and say that Republican representative Jim Jordan was directly told of abuse happening at the hands of this doctor. And Jim Jordan did nothing. The doctor passed away in 2005 but the lawsuits are just now coming forward. And here’s what’s going to happen to Jim Jordan who thinks he is a rising star among the Republican party. He is going to eventually have to take the stand in these lawsuits. He is going to be a named target in some of these civil suits and it’s all going to come out. These former students, these former wrestlers who Jim Jordan coached and was charged with protecting them as their coach. We’re gonna find out all of this and hopefully that’s going to be the end of Jim Jordan’s career. But right now Republicans in the house are actually saying, what if we move Jim Jordan over to the intelligence committee so we can sabotage the impeachment hearings? You know what, Jim, I know you’ve been really obsessed with trying to protect Donald Trump for the last few weeks, but I gotta tell you, man, things in your own personal life are starting to get really bad because the demons from your past are resurfacing. Now I suggest you take a break from trying to defend the crimes of the president and maybe save your own, but in this issue, maybe if you have some evidence saying you came forward and you did tell somebody, but then they did nothing. Maybe you need to go find evidence right now, but that’s going to be really hard to find because it doesn’t exist. These students trusted you, they depended on you and you let them down much like you have with your own constituents. I would love nothing more than for this story to cost Jim Jordan his job in Congress, but that’s a personal vendetta that I have against him. What I really want and what I would prefer more than anything else is for these young men, these, these children at the time who were molested by this doctor, I would like for them to finally get some justice. I would like for them to finally get some closure and yeah, that is more important than removing Jim Jordan from office, but I also don’t think that the two are mutually exclusive. I think we can both start repairing the lives of these young men and get Jim Jordan out of office forever, and that’s a win win for everybody.