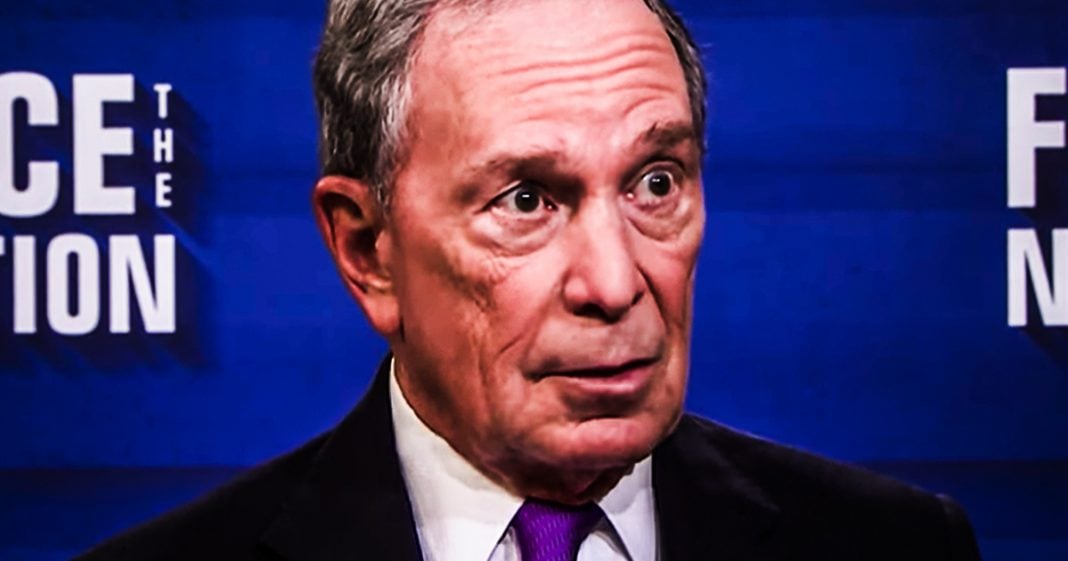 Former New York City Mayor Michael Bloomberg is expected to officially enter the 2020 presidential race, making him the 2nd billionaire to fight for the Democratic nomination. Bloomberg is entering the race because he sees that Biden and the other centrists are fading fast, and he doesn’t want to pay more money under a Sanders or Warren administration. Ring of Fire’s Farron Cousins explains what’s happening.

*This transcript was generated by a third-party transcription software company, so please excuse any typos.
Well folks, yesterday we got the news that exactly nobody had been waiting for, and that is that former New York city mayor slash ninth richest person in the United States, Michael Bloomberg is most likely jumping into the democratic presidential race. And it is likely that he will file his papers to be on the ballot in the state of Alabama for their primary, which today is the deadline. So if he hasn’t done it yet, maybe he’s not going to do it. But here’s the thing, and I think Bernie Sanders campaign said it perfectly. They said more billionaire seeking more political power surely isn’t the change America needs. And that’s exactly correct. Michael Bloomberg is a billionaire worth a little more than $52 billion. He’s also the creator of the stop and frisk policy in New York, which he still seems to stand by. So automatically, even without the billions supporting stop and frisk would be automatic disqualification in the eyes of most Progressive’s, excuse me, all Progressive’s most Democrats, but being a billionaire is also in and of itself at this point disqualifying because Bloomberg has no reason to get into this race other than the fact that he wants to protect his fortune and he’ll spend a fortune to protect his fortune, probably spend more on his presidential race than he would end up paying in taxes if Bernie Sanders or Elizabeth Warren became president. That’s the true irony here. He’s willing to spend millions upon millions upon millions of dollars on his vanity campaign that will go nowhere. Rather than spending the exact same amount in taxes, that will actually help. It’ll help schools. It may be we won’t have to cut school lunch programs. Maybe it could go towards Medicare for all or debt free college or a green new deal. Maybe it could do something even more simple like repairing damaged roads and bridges across the country. But Bloomberg doesn’t want his money going to that. No, no, no, no. He wants his money going out there so more people know who he is. And so that maybe in the off chance every other candidate decides to randomly drop out, he could actually become the president of the United States. Folks, this is insane. Michael Bloomberg does not need to be in this race whatsoever. Neither does Tom Stier. If you guys want to spend millions of dollars on something, spend it on something that matters. Not 2% in national polling, that’s a waste of money. But they don’t care. They don’t want to pay more in taxes. Tom Stire says, maybe he does share whatever. I don’t believe you. Bloomberg absolutely does not. And it had been hinted at earlier in this year that Bloomberg would stay out of the, so long as Biden looked like he was going to be the nominee, but now it doesn’t look that way. Now it’s Bernie and Warren kind of fighting it out for number one. And so Bloomberg decided, you know what, that means I’m gonna have to pay more money each year. So instead of doing that, I’m going to pay a ton of money right now. So that they don’t have to pay any money next tax season. It’s very stupid logic, but that is the logic that Bloomberg had in deciding that, you know what? I’m going to go ahead and throw my billionaire hat in the ring because sure. Everybody loves billionaires today, right? Bloomberg is out of touch, not just with the American public, but apparently with reality as well. Nobody wants another billionaire running for president, but Bloomberg is ignoring all of that because he doesn’t want to pay more in taxes.