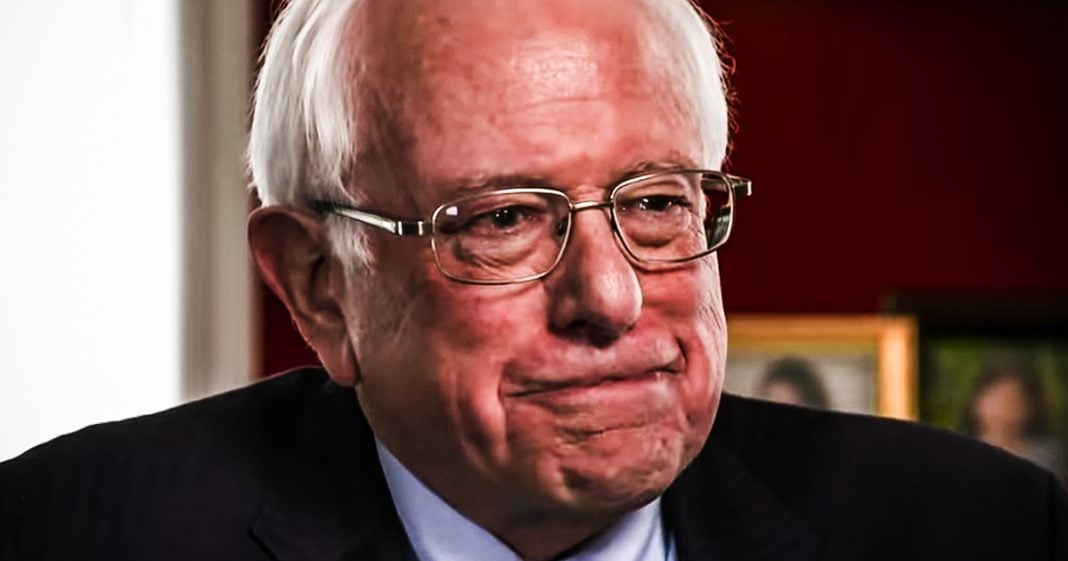 The latest round of polling for Democratic candidates shows that Bernie Sanders is the candidate that voters trust most on the issues. And not just some issues, but ALL issues. From healthcare to the economy, immigration to foreign policy, Democratic voters say they trust Bernie more than any other candidate. But there’s a catch with this poll, and Ring of Fire’s Farron Cousins explains what it is and how to overcome it.

*This transcript was generated by a third-party transcription software company, so please excuse any typos.
According to a new poll by IPSAS, a commissioned by Reuters, Bernie Sanders is the candidate most trusted on the issues by democratic voters. Now, we’re not just talking about a couple issues. This new poll shows that Bernie Sanders is the most trusted candidate on every single issue. They asked about every one of them. Across the board. Voters said, we trust Bernie Sanders the most to handle these issues. Immigration, health care, obviously the environment, the economy, jobs across the board. Majority of people in these polls said, Bernie Sanders is the one. He’s the guy He’s got my trust. Now, that’s the good news of this poll. This poll also offered a some pretty bad news, unfortunately because it said that in spite of the fact that most people trust Bernie Sanders on every single issue, they also think Biden has the best chance of beating Donald Trump. He’s the most electable they found in this poll, and I’m going to say something that I have said a dozen times, and unfortunately I’m going to have to say it a dozen times more, but can we knock it off with this electability argument? Do you know who the most electable person is? The person you want to vote for. That’s it. Look at it that way. Don’t think of this as well. We go to pick somebody who’s going to beat Trump cause I gotta tell you Biden ain’t it. Joe Biden will not beat Donald Trump. You can Mark it down on your calendars right now. This time, this day that I said it, it will never happen. Joe Biden won’t beat Donald Trump. Bernie would, I think Elizabeth Warren would as well. So this electability argument, people out there still confused about, well I don’t like Biden, but I think he’ll beat Trump if you don’t like him, why do you think he’s good enough to beat the other guy you don’t like? Not to mention the fact that’s not what elections are about folks. Elections are about the issues. Bernie’s running on the issues that people want to see passed. Medicare for all debt free, college green, new deal, getting money out of politics, all of these things and so many more. He just released an amazing immigration plan today and yet people say, dang, I love those policies. I trust this guy so much. Let me go vote for Biden cause I think he’ll beat Donald Trump. No, just no stop. Don’t think that way. Because if you think his policies are awesome and believe it or not, a lot of Republicans, most of them think his policies are awesome. Vote for him. That’s what primaries are for. If he doesn’t win and Biden somehow, then you get your chance to vote for the guy that you thought was more electable and maybe you can prove me wrong and you can dance and you can comment on it saying fair and you’re an idiot. I don’t care, I’ll take it. But we’re in a primary. Primaries are about fighting and unfortunately there are about fighting with other Democrats over who has the best path forward for the United States. The voters are clear in this new poll, Bernie Sanders has the best path forward, but unfortunately too many of them say, man, I love that path. That’s what this country needs. This guy is trustworthy, but I’m going to vote for the handsy guy with a bright smile because for some weird reason, I think he can beat Donald Trump. That is insane. If you like somebody policies, whether it’s Bernie or not, vote for that person. That’s why primaries exist.