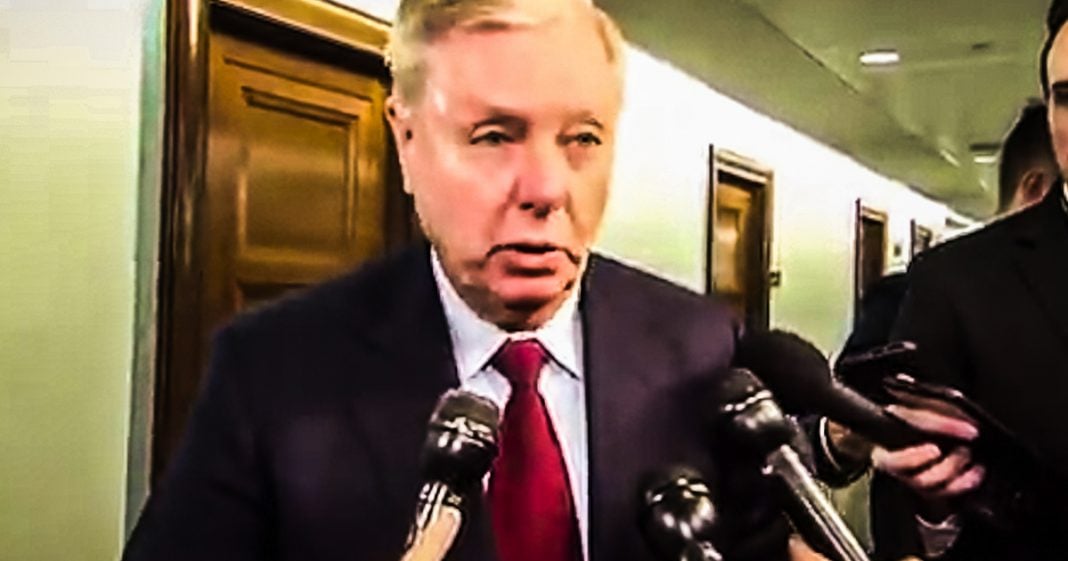 Republican Senator Lindsey Graham is now jumping on the bandwagon by claiming that Donald Trump is too incompetent to commit a quid pro quo with Ukraine. Graham joins Ben Shapiro with this assessment, which might play well for a few Trump fans, but it isn’t going to save him from impeachment. Ring of Fire’s Farron Cousins explains why this defense actually makes the president look so much worse.

*This transcript was generated by a third-party transcription software company, so please excuse any typos.
Republican Senator Lindsey Graham remains one of Donald Trump’s staunchest defenders in Congress, but yesterday he offered a defense of the president. That was more of an insult than an actual defense. Here it is.
[To me, it was the final authority on everything. Trump, I’ve read the transcript for myself. I made up my own mind. Folker the special invoice said there was no quid pro quo. Sanderlin has changed his testimony to say he presumed there was. What I can tell you about the Trump policy toward the Ukraine. It was incoherent. It depends on who you talk to. They seem to be incapable of forming a quid pro quo, so no, I find the whole process to be a sham and I’m not going to legitimize it.].
That’s right. According to Lindsey Graham, who is basically echoing words of Ben Shapiro said just a few weeks ago, Donald Trump is simply too incompetent to commit crimes. His white house in his policy are so incoherent that they couldn’t possibly have crafted a quid pro quo. That’s not how it works. Lindsey. Yes, the president is incompetent. Yes. His policies are incoherent. Yes. He’s not an intelligent human being, but that is not a viable defense in any court in this country. I’m sorry. But we know from the testimonies, including the revised testimony that Donald Trump did in fact engage in a quid pro quo. He engaged in extortion, let’s just call it that. He tried to extort the Ukraine saying, if you want this money, you’re going to do something for me. I need a favor. It’s said in the transcript summary that Donald Trump himself released. We know that this happened, Lindsey, and we know you’re trying to be a good little lap dog and not pee all over the floor, but you really did with this one. You just told the whole country that Donald Trump’s too stupid to commit a crime. Now, if he’s too stupid to commit a crime, shouldn’t that mean he’s too stupid to be president of the United States cans? We go, can we go there? Like how can you be? No, he’s too dumb to commit a crime. But he’s perfectly smart enough to have the nuclear codes. Yeah. I mean we trust him with that, but when it comes to crime, no, the guy’s a bumbling moron. Basically a Homer Simpson mixed with a Peter Griffin. No, that’s not how this works. Yes, the president is a president is incompetent. Yes, the man is painfully ignorant, but he also committed a crime. Lindsey. Now, Lindsay Graham went on in more than we just showed you in that little clip, and he said, the whole thing is BS. Doesn’t believe any of this. Doesn’t need to hear any testimony. Donald Trump’s word is good enough for him. The man who has lied more than 10,000 times since taking office. Lindsey Graham is going to trust his word against the word of literally everyone else who has testified, but don’t worry because Lindsey Graham, he’s not going to read all those testimony transcripts that he also demanded get released because he doesn’t care. He just wants to be close to the president. He wants to protect the president, and if it means insulting the president by saying he’s a moron in the process, then by God, Lindsay Graham is going to do that too.