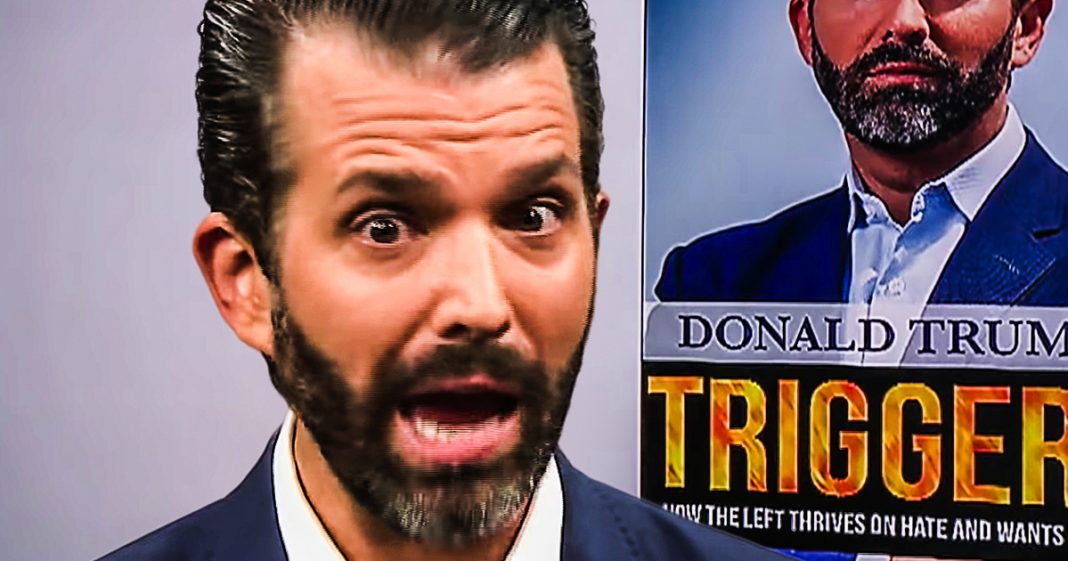 On Wednesday morning, Donald Trump, Jr. shared a Breitbart article that not only named the person they believed to be the Ukraine whistleblower, but also laid out a conspiracy theory that this person was a Democrat who worked closely with “anti-Trump forces” in 2016. While the identity has yet to be confirmed, the fact that the President’s son is putting another person’s life in danger shows how low this family will sink to protect their corrupt empire. Ring of Fire’s Farron Cousins discusses this.

*This transcript was generated by a third-party transcription software company, so please excuse any typos.
Yesterday morning, Donald Trump jr decided to be even more irresponsible than usual and retweeted an article from Breitbart that allegedly named the whistleblower who filed the complaint that launched the impeachment inquiry. Now, Trump jr along with the Breitbart article named this whistleblower, allegedly, this is who they think it is. Uh, we will not be naming the name. We will not be showing the tweet because we are not going to spread that around because we understand, unlike Donald Trump, jr and Breitbart and conservative media, that this person has already received countless death threats as have this person’s lawyers. And in fact, let me amend that because it’s not that Donald Trump jr and these conservative outlets don’t understand that it’s that they’re banking on that. That’s what they want to happen. Folks. They want this person to be threatened. They want something to happen to this person. That is why they have been so desperate to get the name out there to the public. And again, we don’t even know if what Breitbart sent out there, what Donald Trump retweeted, we don’t even know if that is the actual whistleblower. But to the heart of this a Breitbart piece, they talked about the fact that this alleged whistleblower worked with anti-Trump forces in 2016. They didn’t go into much detail about that because no such details actually exist, but they did say that this person working, uh, in the state department, I believe was working closely or they were CIA officer, excuse me. Working in the intelligence community worked also very closely with people in the state department. Oh my God. Somebody in government worked with other groups in government. Stop the fricking presses. Right? No, that’s, that’s what happens. But Republicans are trying to hype that to make it seem that this person was running around in cahoots with everybody they could get their hands on, when in fact, that’s simply how government works. You have to have inner agency communications, interagency cooperation. That’s how the government continues to function. And Oh my God, maybe this person at one time or another actually had to go talk to Joe Biden. Imagine that a government official having to speak to somebody higher up the food chain happens all the time. Happens nearly every day. Donald Trump talks to people like that. You wouldn’t say that that person is suddenly a maga hat wearing rally going Trump supporter, would you? But that is the picture that these conservative groups are trying to paint of this whistleblower completely ignoring the fact, by the way, that the whistleblower is irrelevant. We already have all of the corroborating testimony. These people are also turning over evidence. Whatever they have, the whistle blower does not matter any more yet they are obsessed with it and hung up on it because since we don’t know who this person is, they can paint these vivid pictures that are completely false, but their readers, their viewers, their Twitter followers are gonna eat it up and believe that this is the case. Because these people don’t go out and do independent research. These people don’t understand how the government works. They don’t understand how whistleblower protection laws work, and that’s something that Don jr probably needs to look into right about now because there’s already calls for his prosecution for tweeting this out. Republicans don’t want the whistleblower named because as long as that person remains anonymous, they get to create whatever narrative they want to paint them as some kind of anti-Trump Crusader who’s involved in a deep state coup to overthrow the president. When that person’s name actually comes out, when we find out their history or whatever it is, they’re going to realize soon that yet another narrative they’ve crafted completely falls apart.