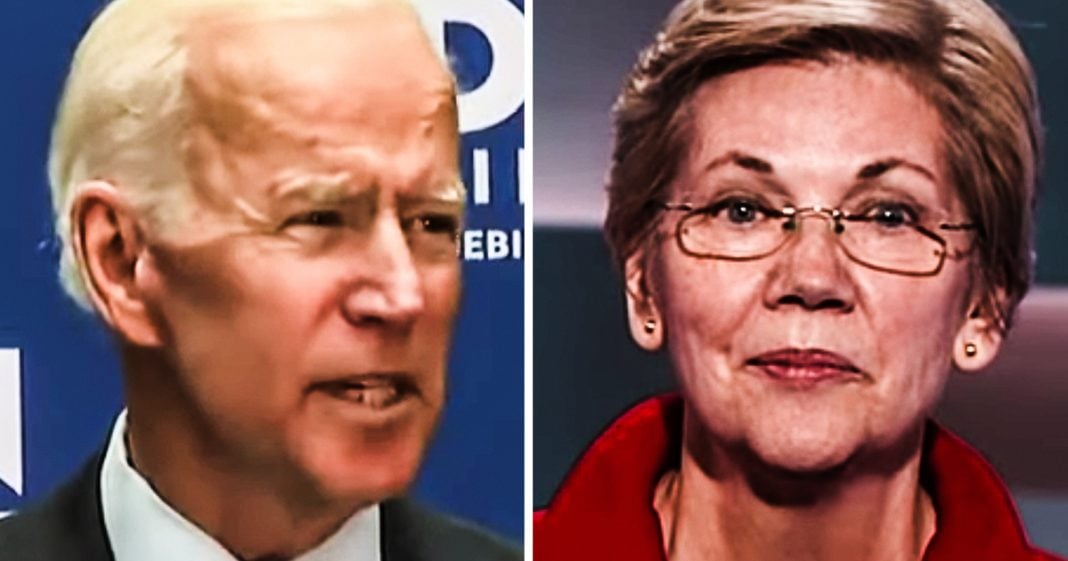 During a $2,800 per person fundraiser on Tuesday evening, Joe Biden accused Elizabeth Warren of being an “elitist.” He also claimed that Warren was condescending, which is his way to fight back after she said he was running in the wrong primary. Still, there’s an incredibly amount of irony and a complete lack of self-awareness for Biden to make these claims while sucking up to wealthy donors. Ring of Fire’s Farron Cousins discusses this.

*This transcript was generated by a third-party transcription software company, so please excuse any typos.
You know, there’s a lot of tone deaf and people lacking self-awareness, a running for the democratic nomination to be president of the United States. But I think Joe Biden really takes the cake and that’s actually saying quite something. Considering the fact that the other day you had Andrew Yang when asked a question about how he’s going to make people less bigoted towards the LGBTQ community, suggested somehow that is universal. Basic income would make people less bigoted. Um, yeah, that’s not how that works. It was a very tone deaf thing to say, but still not quite as tone deaf as Joe Biden sitting at a high dollar fundraiser with healthcare executives and real estate moguls saying that Elizabeth Warren is an elitist because that happened Tuesday evening of this week, Joe Biden at this fundraiser where you had to pay $2,800 by the way, if you wanted to be a sponsor of it, sitting there with these millionaires, possibly even billionaires, high dollar fundraiser. And he has the audacity to say that Elizabeth Warren, who is not doing these fundraisers, at least not right now, when we get to the general, we’ll see, but a, at least now she’s not, and he calls her the elitist. Joe Biden is literally taking talking points from Republicans and using them against his fellow Democrats. Now, we’ve seen it with health care a lot, but this is the first time he has, or we’ve seen really a Democrat take a Republican’s personal attack on Democrats and use it against another Democrat. Al Gore in the 2000 election was smeared as an elitist. John Kerry in 2004 was smeared as an elitist. Barack Obama in 2008 was smeared as an elitist. I mean, Fox news was running segments about the fact that he didn’t like regular mustard. He liked Dijon mustard. Literally, they did a segment on that along with the fact that he eats arugula. His salad, what an elitist. He can’t settle for regular old hearts of romaine. and Joe Biden has now carried those Republican Fox news attacks into his campaign. I don’t care if you like Elizabeth Warren, if you think she is some kind of secret corporatist, which is a really weird thing to think or if you love her this attack is absolutely insane. Elizabeth Warren is not now, probably never has been an elitist. She has told us her story of growing up in poverty, working her way through the ranks, becoming a teacher. Then eventually becoming a Harvard professor in that the kind of story that we’re all supposed to be like, damn, that’s the American dream. You came from, nothing became something amazing, but according to a millionaire Joe Biden, that’s elitist. Can’t do that. Oh no. What a horrible person. Now if you’ll excuse me, I have to go bit out, get out my giant sack with a dollar sign on it and ask these rich people for money. Who is the real elitist here, Joe? Is it the woman who at least for now has sworn off super packs and high dollar phone raisers or is it the shiesty little grifter telling millionaires that his opponent is the elitist? I’m going to go with you on that one, Joe, because out of all the people running for president on the democratic side right now, including the billionaire, I don’t think any of them are more elitist than you.