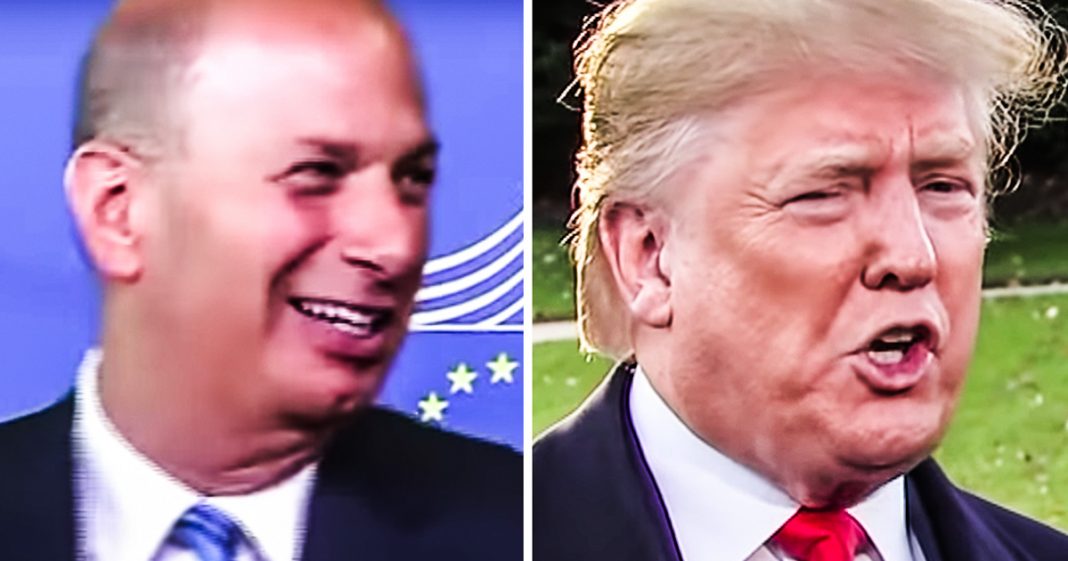 Ambassador Gordon Sondland has officially changed his testimony to Congress, and now says that there was absolutely a quid pro quo between Donald Trump and Ukraine. Or, at the very least, Trump attempted to extort the country in order to get dirt on Biden. There’s little evidence that is still needed to move forward with impeachment, but the most damaging testimonies have likely not even been heard yet. Ring of Fire’s Farron Cousins discusses this.

*This transcript was generated by a third-party transcription software company, so please excuse any typos.
Well, Donald Trump’s week has gone from bad to worse as his, uh, ambassador Gordon Sunland to the European union revised his testimony to house Democrats in the impeachment inquiry. And the revised, uh, testimony says that yes, there was in fact a quid pro quo and Sunland clarified saying that the military aid that the United States was withholding from the Ukraine was in fact being withheld because Ukraine would not yet say that they were investigating Joe Biden and other Democrats. That is the new revised testimony from ambassador Gordon Sunland, who I know Trump likes to say that all these people testifying against him are never Trumpers. Sunland is a hardcore Trumper gave money to Donald Trump. That’s how he got his ambassadorship has been a supporter of Donald Trump. And the reason he even revised his testimony was because he had lied initially to the investigators saying that, no, there’s no quid pro quo. None of that ever happened. I don’t know what any of you folks are talking about. Let’s move on with our day. And then according to Sunland himself, he said he refreshed his recollection after hearing the testimonies of everybody else who came in and said, yeah, there was a quid pro quo. At that point, Sunland was looking at perjury charges against him and at that point he realized, you know what? There’s only so much defense I can offer of the president. There’s only so many times I can lie for him before I myself get in trouble. I’m not willing to do that, so I’m going to go ahead, revise my testimony rather than look at these perjury charges and say, yes, the president did exactly what you think he did. So obviously this is a big story, right? I mean, this pretty much confirms everything that we’re trying to find within this investigation. Now Trump has come out and he said, no, no, no, no, no. Sunland wasn’t able to provide any additional evidence. This is allegedly all hearsay from Gordon Sunland, the guy who was in the thick of all of it and who was talking with other ambassadors about the fact that, yeah, we’re withholding this information or this aid, excuse me, until they give us this investigative, uh, information, or at the very least come out and say that we are investigating Joe Biden and other Democrats. Now, that’s the part that really stuck out to me and other Democrats. Now we know that Donald Trump has said that he thinks Ukraine was somehow involved in the DNC hack, but who are these other Democrats? Is it just Hillary Clinton? Are there other ones involved in this? Were there other people that Donald Trump was trying to dig up dirt on because I think that’s going to come into play in these impeachment proceedings. The bottom line is this. The white house is very obviously running out of defenses for the information that has come out so far. Most of the people who have testified, if they knew anything about it, have in fact said, yes, there was a quid pro quo. This is what happened. This was extortion. Probably a better word for it there. And Trump did it. We knew he did it. We helped him along with it. And now we are where we are. The Republicans in Congress are going to have a very hard time justifying their no votes against this because very soon, once the Democrats wrap up all these closed door depositions, this whole thing is going public. Everybody’s going to be able to see the hearings from here on out. There’s going to be no, Oh, well you gotta look at the transcript. None. No, no, no, no. This is going to be live. This is going to be broadcast. We are going to see first hand here with our own ears and see with our own eyes what all of these people have to say about the horrible things that Donald Trump has done. And at that point, it will be impossible for both the Republicans and some of these Democrats who think that there’s nothing to this to deny what we’re seeing for ourselves.