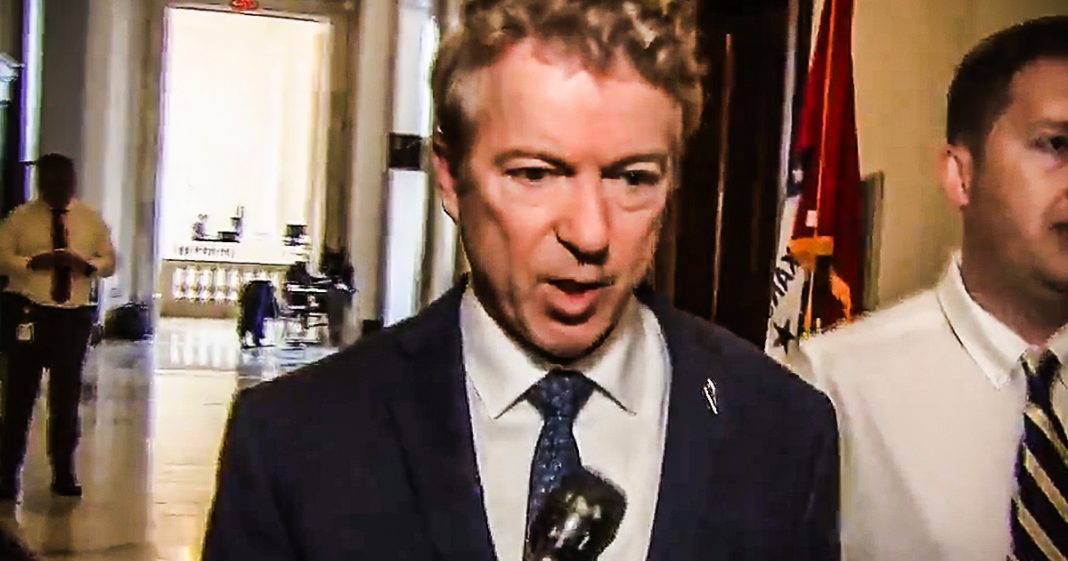 Just one day after claiming that the media needs to unmask the whistleblower, Republican Senator Rand Paul told reporters that the President has the Constitutional right to face his accuser. If Paul knew the Constitution a little better, he’d understand that the 6th Amendment protections he’s talking about only pertain to criminal trials, and that hasn’t started yet for Donald Trump. Ring of Fire’s Farron Cousins explains what Rand Paul is trying, and failing, to do for the President.

*This transcript was generated by a third-party transcription software company, so please excuse any typos.
Monday night Rand Paul uh, did a rally in his home state of Kentucky with Donald Trump. The rally obviously didn’t do a whole heck of a lot to rally voters in Kentucky as we saw from last night’s election results where their governor was replaced with a Democrat. But nonetheless, something interesting did happen. Monday night Rand Paul came out and said, we know who the whistleblower is. We have his name and I encourage the media to go out there and release this person’s name. So on Tuesday, after that Monday night rally Rand Paul was cornered by reporters in the halls of Congress where they asked him, yes, that illegal. And this was Rand Paul’s response.
[Your colleagues Republicans say that it’s irresponsible and dangerous for you to call out the whistleblower. Yeah. You’ve heard of the constitution right, the constitution as the sixth amendment. The sixth amendment says very clearly that, uh, if you’re accused of a crime, you have the right to confront your accuser. So I think the constitution is very clear on this and we shouldn’t completely just throw away the constitution, particularly because, you know, certain networks just don’t like the press.]
You know you have to forgive Rand Paul A. Little bit. Obviously this isn’t the kind of guy that knows what the constitution says. He doesn’t know what the laws actually say because he’s not trained in law. Not trying to knock him here, but the dude is an eye doctor and that’s what he went to school for. That’s what he was before he decided to enter politics riding on the back of his daddy’s Cult following guys, an eye doctor, and he very clearly based on that statement, doesn’t know what the constitution says. Yes you do. When you are in a trial, have the right to face your accuser. This isn’t a trial though, and that’s where Rand Paul’s confusion comes in. He’s either flat out lying to the press, which he is, or he also doesn’t understand what the process is, which he doesn’t Rand Paul May be a decent eye doctor. I don’t know. I’ve never been to him, never talked to anybody who has, but when it comes to being an intelligent politician, Rand Paul is pretty much at the bottom of the barrel right next to Matt Gates. They don’t know what they’re doing. They’re very stupid when it comes to being a lawmaker and as I’ve repeatedly said, the problem with stupid people is they think everybody else is as stupid as they are and that’s why you get these insane Rand Paul talking points, but as if that wasn’t bad enough, what happened yesterday in that hallway were Rand Paul proved he didn’t know what the constitution says. He then came out later and said, I’m probably going to release the identity of the whistleblower. Rand Paul said that he wants to skirt the law. Actually, this isn’t even skirting while he wants to break the law and release the name of this whistleblower who started this impeachment inquiry, and here’s why. In addition to it being illegal, it’s just a flat out dumb idea. The whistleblower doesn’t matter. The whistle blower at this point is 100% irrelevant. That complaint that they filed may have kickstarted this whole impeachment inquiry, but it’s no longer based on that at all. We have testimony from multiple different people, including Gordon Sandlands, recently updated testimony where it says, yes, there was a quid pro quo. Here’s exactly how it happened. Here’s how we, the underlings, the ambassadors helped to carry it out. The whistle blower doesn’t matter anymore, but that’s all Republicans like Donald Trump and Rand Paul seemed to have at the moment because we don’t know the identity of this person. They can try to say that, Oh, there’s a big secret. There’s a big conspiracy. There’s this mystery person out there doing all of this. But the truth is we have the real names of the real people and the real transcripts of their real testimony, proving that Donald Trump committed very real crimes. The whistleblower doesn’t matter anymore, but that’s not going to stop Rand Paul from trying to break the law to tell us who this person is.