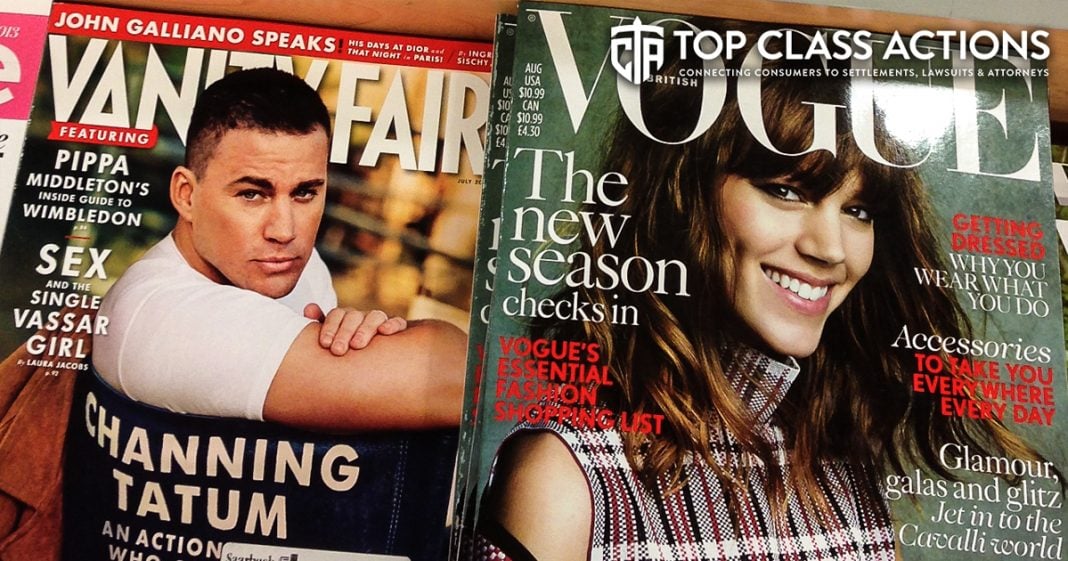 A class action lawsuit alleges that the publisher of magazines like Vogue, Vanity Fair, GQ, and Glamour, unlawfully auto-renews magazine subscriptions without consumer knowledge or consent. Plaintiffs Saul Granillo and Jennifer Fite say they responded to advertisements offering a one-year magazine subscription at a discounted rate. They allege that they were not notified that the subscriptions would auto-renew at a higher rate. The customers claim that Conde Nast makes a practice of automatically renewing subscriptions without adequately notifying consumers. Ring of Fire’s Farron Cousins discusses this with Scott Hardy, President of Top Class Actions.

Farron Cousins:                  Today’s society is pretty much built around auto renewal subscriptions. Whether it’s your magazines, your newspaper, you music service, your monthly, a Amazon prime, whatever it is, everything is automatically renewing whether you want it to or not. Joining me now to talk about the problems with the, whether you want it to or not, is Scott Hardy with Top Class Actions and Scott, I think magazines and newspaper probably about the worst there is for the auto renew. Because a lot of times people will subscribe to these things, I know we have had to do it here at Ring of Fire, we subscribe to a magazine because we need access to an article. You know, we need access to something in a law journal, but that’s it. But you get hit with those auto renewals because they don’t tell you about them. They don’t give you the option to opt out and suddenly you’re on the hook for big bucks here and that’s what this lawsuit is claiming here against Conde Nast. Tell us what’s happening.

Scott Hardy:                          Exactly. You know, the, the print media industry is struggling. Yes, they’re trying to go online and a lot of them are, you know, they’re all online now, but they’re, they’re unable to charge for subscriptions in a lot of cases. So now hundreds of millions of dollars has gone out the window. So now you’ve got these old school print magazines that are getting people to come back in. They’re saying, yes, it’s all online now, but please give us $5 a year and we’ll send you 12 issues of your favorite magazine. You know, 50, less than 50 cents an issue. Come on, do it. And people say, fine, that sounds good. Good deal. I’ll take it. Well, in this case we had the plaintiff who signed up for that $5 put in her credit card number and low and behold, a year later her, her card got 12, charged $12 automatically. She never approved it. She never said renew me. She was just on an automatic renewal plan that she didn’t know about. And this affects Vogue, Vanity Fair, GQ, Glamour magazines. A lot of these magazines are doing the same type of thing according to this class action.

Farron Cousins:                  And it’s very damaging for consumers too. I mean, most people in this country budget. They know what their paycheck is going to be. They know what bills they have to come out of it. So when you suddenly get popped out of nowhere for $22, yeah, that can really hurt a lot of people in this country. And it’s unfair that these magazines, you know, Conde Nast isn’t sending out emails saying, hey, just be aware in two months you’ve got this auto renewal. If you don’t want it, here’s what you do. Or if they even sent something out saying, hey, your auto renew is coming up, we’ve tripled the price. So hope you’re okay with that. But as this lawsuit claims, none of that happened. You told me it was going to be $5. I paid $5. A year later, you come around and you charge me $21.99 out of, out of nowhere.

And so yes, that’s going to be a problem. And it reminds me, just kind of anecdotal here. I, I have a subscription here for work for the wall street journal. It has a lot of legal articles that we use all the time. Two months ago when I had to submit the invoice to bookkeeping, I noticed that the price just doubled, just doubled for no reason. They didn’t let me know it doubled. They didn’t give me a warning it was going to double. They just decided we’re going to charge you $40 this month instead of $20 and it’s kind of the same thing here except this is obviously a monthly recurring one and it’s a lot more painful. But this is common across this industry right now and I think as you pointed out, part of it’s because they are so cash starved and they’re willing to do whatever it takes to kind of boost their profits a little bit.

Scott Hardy:                          Exactly, anything they can do to, to make that extra money and unfortunately it’s causing some big sticker shock to viewers. And as you said, $20 to me, you know, isn’t a big deal. But to a lot of our viewers out there, it is. We have so many people out there that are on a fixed income. And the problem is even if it’s not a big deal to somebody, it shouldn’t be happening. It’s, you know, it’s wrong and it should be corrected. These folks should not just be automatically charging people and doubling, tripling, quadrupling the price of a subscription, hoping you don’t actually notice.

Farron Cousins:                  You know, and it’s also very hard to get in there and cancel these things, to remember what all of your subscriptions are. You know, there, there’s the commercial going on right now about, oh he has a gym membership and a music service and this and this, and he doesn’t even realize he’s paying for all that. And honestly, I feel like companies are kind of banking on that right now. Like that, that that’s the whole point of everything gets you to pay a monthly subscription. Every now and then bump it up by a buck or two just because you probably won’t notice. But when you have eight different ones and they’re all jumping up every couple of months, it hurts. And eventually it’s going to come back and bite all these companies, isn’t it? Not just with this magazine one, but a lot of them out there are kind of engaging in this same behavior.

Scott Hardy:                          Yeah. A lot of them are and then they get caught and then they get the class action filed against them and they fix it. So, you know, these class actions catch them, they go, oh sorry, here’s $8 million to our people that will submit a claim. We’re sorry about that. Yes, we made a hundred million dollars on this practice over the past number of years, but we’ll go ahead and pay a $10 million fee and stop it going forward. So, it’s just a matter of catching them and making them change their practice.

Farron Cousins:                  Right, and that is exactly what these lawsuits are designed to do. So for more information about this particular issue, follow the link in the description of this video. Head over to Top Class Actions and while you’re there, make sure you sign up for their weekly newsletter. Scott Hardy with Top Class Actions. Thank you very much for talking with me today.