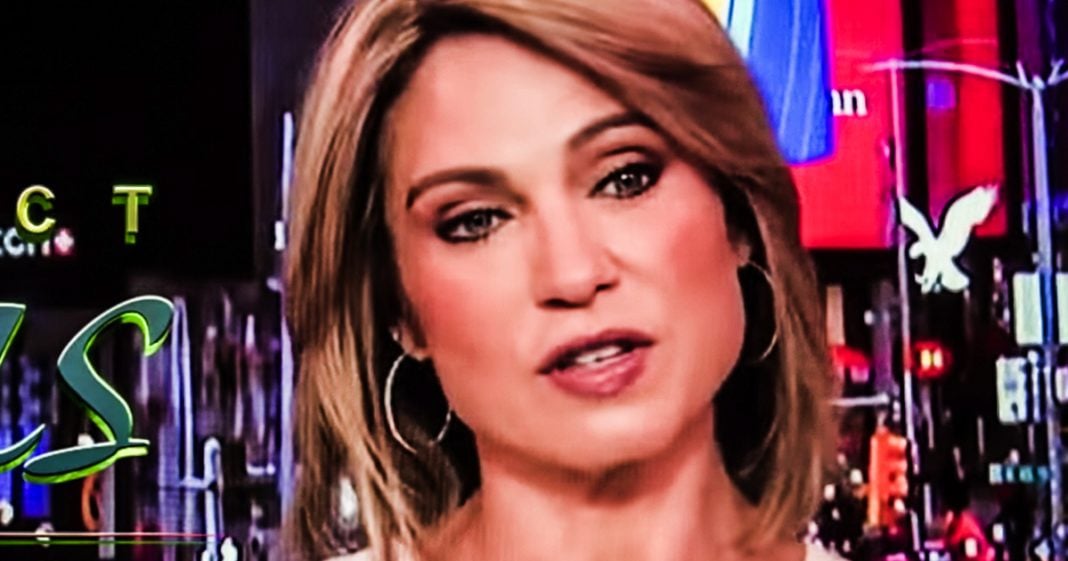 An uncovered video has been revealed by Project Veritas, showing an ABC news reporter angrily discussing the fact that her network killed an interview that she did with one of Jeffrey Epstein’s victims. The reporter, Amy Robach, says that she did the interview 3 years ago and that it implicated Prince Andrew, Alan Dershowitz, and Bill Clinton, but her network wouldn’t let her run it. Ring of Fire’s Farron Cousins discusses the story and the fact that Project Veritas finally got something right.

*This transcript was generated by a third-party transcription software company, so please excuse any typos.
Here on ring of fire. We have talked a lot about project Veritas. We’ve talked about their dirty reporting, their deceitful video editing and the fact that they pretty much get everything wrong and they try to, uh, convince the public that their lies are actually the truth. Well, this time project Veritas got it right. They released a clip of ABC news reporter Amy Robach where Robach was talking about the fact that three years ago she had done an interview with one of Jeffrey Epstein’s victims, but the network buried it. This actually was awesome work by project Veritas. And that’s a sentence I’ll probably never have to say again in my life, but here is the clip of Robach talking about having the story and the network killing it.
[I’ve had the story of for three years I’ve had this interview with Virginia Roberts. We would not put it on the air. Um, first of all, I was told who’s Jeffrey Epstein? No one knows who that is. This is a stupid story. Then the palace found out that we had her whole allegations about Prince Andrew and threatened us a million different ways. Um, we were so afraid we wouldn’t be able to interview Kate. We’ll say that we got also quashed the story. And then, um, and then, uh, Alan Dershowitz was also implicated cause of the Plains. She told me everything. She had pictures, she had everything she was in hiding for 12 years. We convinced her to come out, we convinced her to talk to us. Um, it was unbelievable what we had. Clinton, we had everything. I tried for three years to get it on to no avail. And now it’s all coming out and it’s like these new relevant revelations and I freaking had all of it. I, I’m so pissed right now. Like every day I get more and more pissed cause I’m just like, Oh my God, we what, what we had was unreal. Other women backing it up. Hey. Yep. Right. Edwards, the attorney three years ago saying like, aunt, like we, there will come a day, but we will realize Jeffrey Epstein was the most prolific pedophile this country has ever known. I had it all three years ago.]
That’s pretty self explanatory. And as I mentioned project Veritas has had a nasty little habit of trying to edit videos to make people look bad or make them look like they committed crimes. But as you can see in that clip, there is no editing and there’s no need to edit because the ABC reporter, Amy Robach, she admits it, she flat out says it. Now, Robach has now come out in a statement and said, listen, I was speaking from a place of anger because I did all this work on it, but I wanna make clear. Robach says that ABC news never directed us to not run this story. They didn’t burry it. They just, you know, blah, blah, blah, blah, blah. She’s now trying to cover her tracks for her employer because she’s scared for her job and that’s not fair to her. She clearly, if she had this story in 2015 like she says she does or did, she’s a good reporter. She was on top of things before the rest of the media was covering it. We hear it ring of fire. Been talking about Epstein for about 10 years, but we haven’t seen it from cable news during that whole time until, of course, he was arrested earlier this summer, but Robock had the story. She had the victim, Virginia Roberts Ghafari. We have said that name plenty of times. Here she is. The woman who Amy Robach interviewed. She flew out to Colorado to interview her. They had the dirt, as she said in the video on Britain’s Prince Andrew on bill Clinton on Alan Dershowitz, and Ghafari is the woman who has accused Dershowitz of having sex with her while she was under age and basically a sex slave of Jeffrey Epstein. They had that story back then and I do not believe for a second Robach’s uh denial that the network killed it. She kind of admits in the video they killed it, you know, she says they were all like, who’s Epstein? Everybody knew who Epstein was. In fact, some of the higher ups at ABC news definitely knew who Epstein was because George Stephanopoulos, one of your top anchors has been to parties at Jeffrey Epstein’s house. Now. Could that be why y’all didn’t want to run this story of Jeffrey Epstein because one of your top people, one of the major players in American politics for decades was partying with the guy. Maybe that’s one of the reasons I don’t think it’s the only reason. I definitely think it played a factor in it, but this is disgusting. ABC news could have put an end to some of the abuses that Jeffrey Epstein was committing. Maybe we could, could’ve had him thrown in jail four years ago instead of earlier this summer, but they sat on it. Let women continue to be abused and trafficked into this country to be sex slaves. And that’s on ABC. And there’s nothing that Robach or anyone else can say to defend the network’s disgusting actions at this point. And again, got to give the kudos to project Veritas. If you had to get one right, I’m glad it was this one.