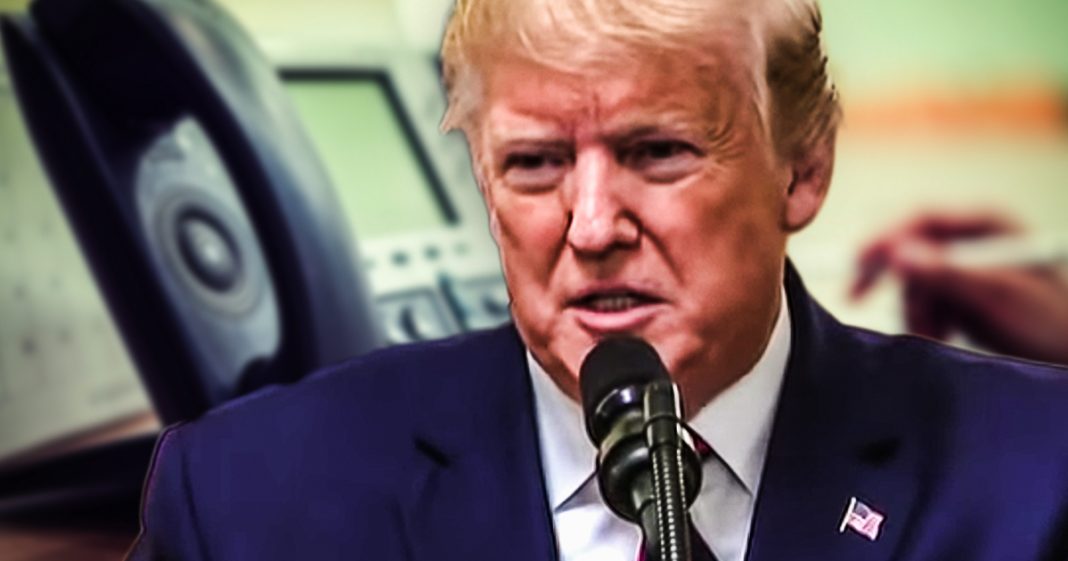 The Republican Party hired an outside group to conduct surveys with voters, and if those voters said they didn’t support impeachment, they were given the option to be patched through to Congressional Democrats. This was an effort to jam the phone lines of Democrats in Congress, as the Republican Party grows desperate to stop the impeachment of Donald Trump. Ring of Fire’s Farron Cousins discusses this.

*This transcript was generated by a third-party transcription software company, so please excuse any typos.
The Republican party has come up with a new plan to fight back against the impeachment probe by the Democrats in the house of representatives. But it doesn’t involve, you know, actually countering their points legally. You know, they’re, they’re not out there using legal arguments to say that, no, this claim is false. Here’s why they’re not presenting evidence that shows that the impeachment inquiry is a scam. No. Instead, they have hired an outside group to find individuals to call Democrats in Congress to jam their phone lines with anti impeachment rants. This was an effort that was in fact paid for by the Republican national committee, a committee. So this is the official Republican party paid an outside company to make some phone calls. And what they did with these phone calls was they asked people if they support an impeachment or if they didn’t. And if they said they did support impeachment, they said, well thank you. Have a nice day. If they said they did not support the impeachment probe, the survey then said, well, Hey, we can connect you to the office in Congress of a democratic representative working on this. Would you like us to do that? And you can tell them what you think of it. In total, there were more than 11,000 of these calls patched through to democratic, uh, members of Congress. And the goal was not just to skew the view on impeachment, but also to jam up their phone lines so that they couldn’t go about their daily business. They couldn’t actually do their jobs effectively, trying to make them into the do nothing Democrats that the president claims they are. There’s nothing illegal about this unethical, absolutely, but illegal that it’s a bit of a gray area and it doesn’t seem to cross over into the fully illegal part of it. But what is interesting is the fact that we know about this because the RNC and their officials bragged about it during a dinner that they had. It’s a, what they call an off the record dinner. But unfortunately, apparently somebody leaked it to the New York times and we found out about it. But the officials were bragging to members of Congress and a Republican fundraisers and other Republican activists at this dinner saying, guess what we’ve been doing? We hired people to go out there and jam up Democrats. Phone lines. Yeah. When you do stupid things, it’s probably best to not talk about the stupid things you do publicly, especially considering the fact that you are trying to cover for an administration that is universally hated even by members of your own party. So somebody’s going to leak it. Republicans, I know you’re not very smart, but I at least thought you were smarter than that, but I guess every now and then we get one wrong because you are clearly a party being run by some of the dumbest human beings to ever work in American politics. But here’s the thing. These phone calls aren’t going to change what’s happening in Congress. These phone calls, they may jam up the phone lines for a couple of days, but it’s not going to change the fact that all of the evidence we have so far points to the president asking for a quid pro quo with Ukraine Republicans are out of options. All they have right now is dirty tricks. They don’t have any evidence to support their claims. They can’t try to say, Oh, this whole thing is illegal, because it’s not. They got nothing. So they’re going to continue to get more and more desperate. We’re going to see more little plans like this, try to play themselves out. We’ve seen Matt Gates try to get Adam Schiff kicked off the committee and none of it has worked. If Republicans truly believed that the president of the United States was innocent, they would be working to prove his innocence rather than trying to stop the investigation. And that is the big takeaway that everybody needs to understand.