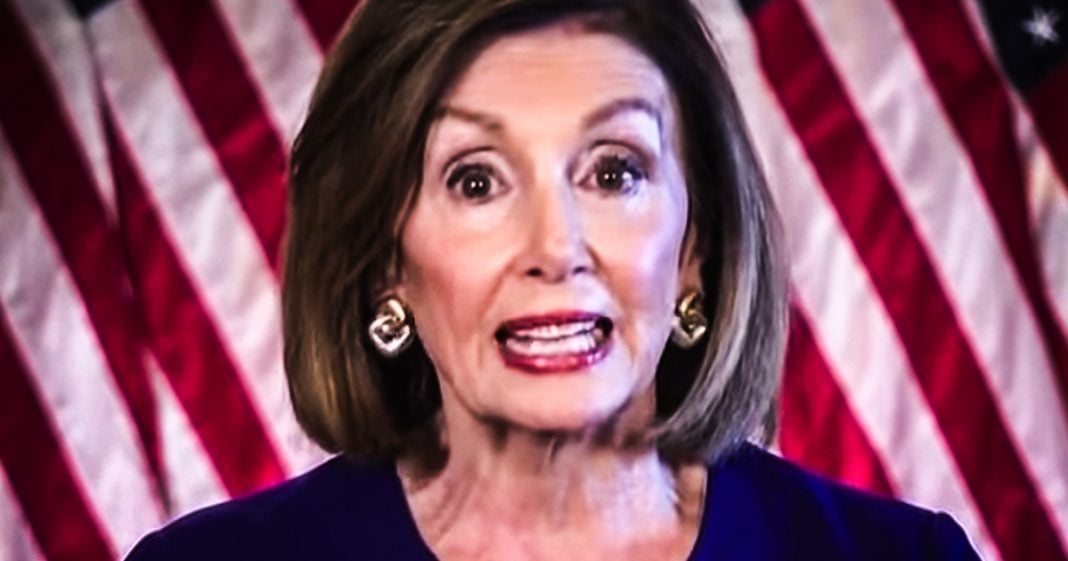 House Speaker Nancy Pelosi has a warning for Progressive candidates: You can’t win the electoral college, so scale back your policies. This message is not only depressing, it is factually inaccurate as nearly every poll shows that progressive polices are a big winner. The Democrats have to break free of Nancy Pelosi, as her way of thinking no longer works for the American public. Ring of Fire’s Farron Cousins discusses this.

*This transcript was generated by a third-party transcription software company, so please excuse any typos.
Democratic speaker of the house. Nancy Pelosi gave an interview to Bloomberg recently that was published this past Saturday where she issued a warning to progressive Democrats running for president saying, you gotta be careful because what works in San Francisco may not work in Michigan, but what does work in Michigan does work in San Francisco? And you’ve got to scale back on your progressive policies like Medicare for all or a wealth tax, because that may fire up the democratic base. Pelosi says, but it’s going to scare off everybody in the general election and you have to worry about the electoral college. You have to win that or else you get nothing. So scale back. Think small. Aim low is the message that Nancy Pelosi was sending to progressive Democrats, Nancy Pelosi, with an estimated net worth of $30 million. Thinks we need to just hold our horses here and not worry about helping other American citizens. Nancy Pelosi is everything that is wrong with the democratic party. She’s awful. She’s absolutely awful, and this proves it. And here’s the crazy thing, folks. You’ve got Democrats out there. It’s not crazy, but you’ve got Democrats out there defending Pelosi right now and do those Democrats who dare defend this disgusting display from Pelosi. I ask you this, you think it’s okay. You think it’s totally cool letting people die in this country because they don’t have health insurance? Because Nancy Pelosi in the same interview says we need to build off the affordable care act because she just like Joe Biden was instrumental in creating it and they don’t want it to be undone by something better. They want the affordable care act to be the thing. Even though expanding that, you’re still leaving millions of uninsured people out there, but to hell with them, right? That’s what you’re defending and there is no defense of that. so not only is Pelosi saying aim low, but, but also her assessment in general is wrong and stupid because every available poll shows that Nancy Pelosi is being dishonest here. Majority of people like the idea of Medicare for all, and that includes Republicans. Majority of people including Republicans like the green new deal, they like the wealth tax. They like the idea of overturning citizens United with a constitutional amendment. They want all of these progressive ideals, including the Republicans, but Nancy Pelosi’s out there saying, no, aim low. Tell everybody we’re not going to do all these grand things. No debt free college, no Medicare for all will eventually build towards it. Off the plan that I helped in place. That’s what she’s saying. She’s got to go. She has to go. There is no more defending her. There is no more saying, Oh, she’s playing three dimensional chess. She knows her electoral politics. She’s scared. She is a coward and she’s trying to play it safe to save her own ass. Polls show that these plans work and they’re hugely popular. You want to win the electoral college. You stick with these plans, you want to lose it. Then you follow Nancy Pelosi because under her leadership, the democratic party lost 1100 seats from coast to coast and border to border. That’s what you get with Nancy Pelosi. You want to win, You send her back to California and you put a progressive like Bernie Sanders at the top of the ticket.