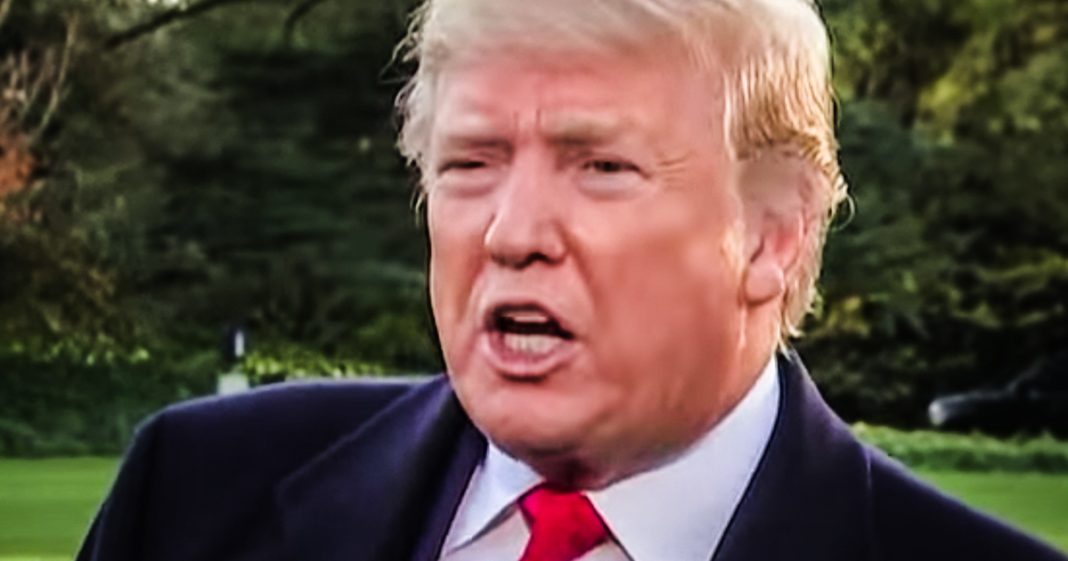 A federal appeals court told Donald Trump this week that he was NOT immune from investigation while serving as President, and therefore he had to hand over his tax returns to Manhattan District Attorney Cyrus Vance. Vance is investigating the payoffs that Trump made to keep his affairs quiet, and part of the investigation hinges on how Trump wrote those payments off on his taxes. Ring of Fire’s Farron Cousins explains what’s happening and what’s next for this case.

*This transcript was generated by a third-party transcription software company, so please excuse any typos.
Yesterday, a unanimous panel from the second circuit court of appeals ruled that Donald Trump is not, in fact immune from investigation. He is not above the law and he therefore must turn over his tax returns. Eight years of them to Manhattan district attorney Cyrus Vance, who is investigating Donald Trump and the Trump organization to find out what exactly happened with those hush money payments. Now, Donald Trump’s lawyer, Jay Sekulow, has announced that they will in fact be appealing this to the Supreme court. So that’s the next step for this case. However, legal analyst sorority out there saying the Supreme court really can’t do too much with this because the second circuit was smart and the second circuit wrote their opinion in such broad sweeping language that the Supreme court’s gonna have a tough time trying to say that no, this is wrong. And here in a very tiny nutshell is what the second circuit said. While the president may be immune from prosecution, he is not immune from turning over evidence that could be part of a criminal investigation even if that investigation ends up wrapping himself into it. Again, that’s the nutshell. The ruling was dozens of pages. If you want to go through and see the whole thing, feel free to do that. And I do encourage people to do that if you have the time, but they preserve the part of, wow, the president may not be able to be prosecuted if he’s got evidence that’s relevant to a criminal investigation. He, he asked to turn that over. So here are the three options that the Supreme court has. The first and most likely is that they don’t take the case at all. They say, Nope, we’re not going to hear it. So the second circuit’s decision will stand. Trump has nowhere to go. He has to turn over the tax returns or LT does get arrested. Option number two, they hear the case and by some miracle you get enough conservatives on that court to vote with the liberal justices and they say, you know what? Yes, you have to turn over your tax returns. The second circuit’s ruling was sound was logical. You have to do this. Now this is actually not that far fetched one because the Supreme court owes nothing to Donald Trump. Even the people he put on there. We have seen chief justice John Roberts break with conservatives on several shocking occasions. He’s also been a very staunch conservative on other occasions, so we can’t count on anything, but they’ve got their appointment for life. They’re set, they don’t owe anybody anything else any more. They can’t be touched basically. So yeah, they can do whatever they want now. I think it’s stupid to bank on that, but it’s a real thing with real possibilities. Also, they understand that if they give this broad sweeping immunity to the president of the United States, it doesn’t just stay with Donald Trump, it goes to the next president and the next one and every other one after that. And eventually you’re going to get a Democrat in office who’s going to do something really bad. I mean, statistically, yes, it’s eventually going to happen. And then you’re kind of stuck because the Republicans, you can’t remove that guy because of the Trump decision. And the court knows that and they don’t want to screw the country down the road or what they think would screw the country down the road. So there’s a good chance they would say, no, I’m sorry. You got to turn off the tax turns. Third option, obviously they hear the case and they say, no, Trump doesn’t have to turn over his tax returns. Then we enter a new era of fascist dictatorship here in the United States. Also a very real possibility, but, and this is the most important thing that I want any Trump supporter watching this to take away with them. The president is trying to hide something and he’s tried to hide it now through several different court rulings, all of which have gone against him, and if he had nothing to hide, he wouldn’t be hiding. And what they’re trying to hide here, what Cy Vanson a a Manhattan is trying to find out is how they wrote off those payments to Michael Cohen who then paid off the women who Donald Trump’s swears he didn’t have affairs with yet. He still paid them 130 and 150,000 each. That’s a lot of money to not have sex with Donald Trump, but I’m sure there’s lots of people who would be willing to take that sum to not have to have sex with Donald Trump. Nonetheless, they want to know how he wrote it off because evidence suggests that they wrote it off as a standard legal fee, when in fact it was a bribe, hush money payment, and that would be illegal. That would be tax fraud. And then the president’s in some serious trouble, and again, he wouldn’t be trying to hide eight years worth of his tax returns if there was nothing in there worth hiding.