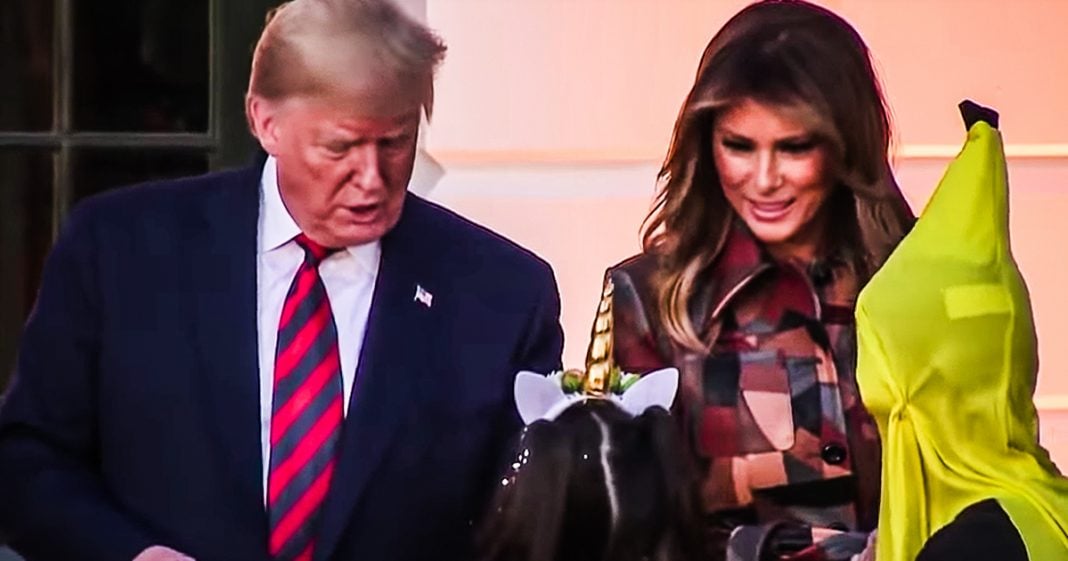 At last week’s White House Halloween Party that is put on annually for children, the White House had a station set up where children could “build the wall” by putting their names on construction paper that looked like a brick and then they could post it on the wall. This administration is teaching our children to hate, and this may be one of the sickest things they’ve ever done. Ring of Fire’s Farron Cousins discusses this.

*This transcript was generated by a third-party transcription software company, so please excuse any typos.
On October 25th the white house through its annual Halloween party over at the Eisenhower executive office building, which is where most of the white house staff actually works. Places right across the street from the white house. That’s where they had their little Halloween party and every office there was in charge of, you know, decorating their little area. You know, some had carnival games, some had other things like, Oh, what do you want to be when you grow up? And in fact that was actually the theme of the Halloween party was when I grow up, I want to be…. But there was one, one station at this, a little party that left parents quote horrified. And that’s coming from the parents who attended this. And it was right outside the white house speech writers office. And it was a little thing where kids could help build the wall. There were little red pieces of construction paper cutout to look like bricks. And the little bitty kids dressed up as superheroes or goblins and zombies got to walk up and they wrote their name on their little brick and they, they put it on the wall to help build the wall that Donald Trump wants to build. And we know about this because some of the pictures were leaked to Yahoo news so you can see them for yourself. It’s an actual thing under the big headline on that wall that says build the wall. And again, the parents were horrified. The kids probably didn’t understand what exactly they were doing. With that, I get to write my name on this cool little thing. I get to stick it on the wall. Everybody sees that I was here at the party. That’s really cool for me, a little kid, I don’t understand that. This is actually bigotry, in action. Learned, taught, bigotry coming from the white house itself. Folks see bigotry isn’t born right. A kid’s not just born and they come out and their first words are, man, I really hate this certain group of people. No. Those behaviors are taught and this white house seems more than happy to be that teacher, to tell these kids that we need to keep out the others, that we need to keep these people who don’t look like you, they don’t sound like you. They don’t dress like you. We need to keep them out of this country. Why? We just, we just don’t want them here. They’re probably going to commit some crimes even though statistically statistically, excuse me, that’s not true, but we just want to keep them out anyway. It totally has nothing to do with the way they look or the way they speak, but it does at the end of all of this. That’s what this is about. Decision about them coming over here and taking your good job. It isn’t about them coming over here and trying to kill you. We want to a wall because they don’t look like us and they don’t sound like us. That’s it. If you think there’s a different reason why that wall is being built than you are lying to yourself. This economy here in the United States is actually dependent upon immigrants coming over, you know, the temporary workers, the guest workers, and even people simply coming over here becoming citizens and working jobs. Our economy can’t survive without them, so we need them. As I mentioned, statistically, they commit fewer crimes than the native born population. So they’re not a threat. Yeah. Probably a couple bad apples there, but even fewer bad apples than we have in the native born population. So overall, they’re actually a safer group to be around, but we want to keep them out because of the color of their skin. And this white house wants to indoctrinate children into thinking that build the wall is just a cool, fun thing that they should be a part of.