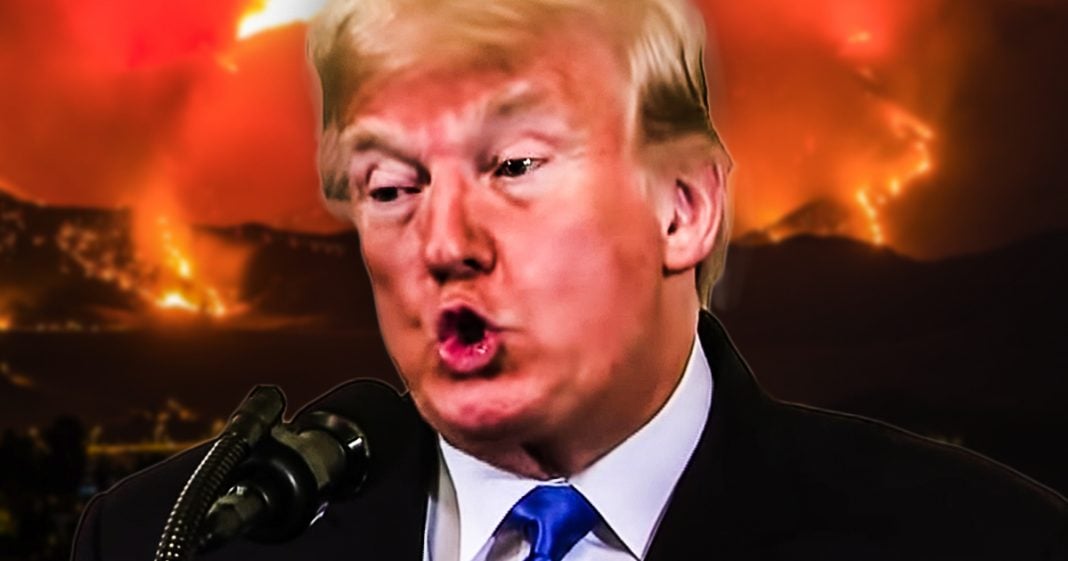 There’s no question that Donald Trump hates the state of California, and during a recent Twitter tirade, the President said that he was going to cut off aid for the state because they can’t seem to stop having massive wildfires. He apparently doesn’t realize that the federal government is in charge of clearing the forests to prevent these disasters and to provide funds for the state to help out. Ring of Fire’s Farron Cousins explains what’s happening.

*This transcript was generated by a third-party transcription software company, so please excuse any typos.
So far this year, nearly 200,000 acres of the state of California have burned down 200,000 acres and president Donald Trump is sick and tired of it. He’s tired of California governor Gavin Newsome letting his state burn and so Donald Trump said this weekend that he was not going to be giving any more federal aid to the state of California because they’re just letting their state burned down. Here is what Donald Trump said as part of his Twitter tirade against California. Gavin Newsome and apparently fire the governor of California, Gavin Newsome, has done a terrible job of forest management. I told him from the first day we met that he must clean his forest floors regardless of what his bosses, the environmentalist’s demand of him must also do burns and cut fire stoppers every year as the fires rage in California burns. It is the same thing and then he comes to the federal government for money help no more get your act together. Governor, you don’t see close to the level of burn in other States, but our teams are working well together and putting these massive and many fires out. Great firefighters. Yeah. We don’t see other States burning like this because other States have different environments. They have different climates. They’re not effected by the Santa Ana winds like these areas of California are that helps spread these fires. Yeah. I don’t know if Donald Trump understands this, but different places are different, right? You don’t have the same weather up in New York in the winter that we have down here in Florida, people in Wyoming typically don’t worry about the hurricanes that we have to worry about down here in Florida and we don’t have to worry about the wildfires like they have to worry about out there in California along with earthquakes and mudslides and other natural disasters, but the fires are the ones that are made worse by climate change and Donald Trump is now saying that, Nope, there’s too many fires. You don’t get any more money. We’re not going to send you anymore. Even though I don’t know if this guy realizes this either. It’s actually the job of the federal government to go out there with the forest management. It’s actually not a state thing. There is a department inside of the federal government that that’s one of their explicit jobs and when they are unable to do it, then they have to give the money to the state so the state can go out there and do it. But it is a job of the federal government and even if it weren’t, right, let’s say even if it wasn’t the federal government’s job for this forest management, that it was solely on the state of California. Does Donald Trump not understand that he is also president of California that he doesn’t get to just cut off the most populous state in the country because he doesn’t like them. Like you can’t ignore them. You can’t just not send them aid. You’re the president over there to ensure you’re not going to win the state. You didn’t win it in 2016 and that’s actually why you’re pissed off at them. That’s why you’re punishing them saying we’re not going to give you federal aid. People are losing their homes. People are losing their livelihoods and people are losing their lives, and the president is more than happy to let that entire state go up in smoke because they didn’t vote for him in 2016 that’s what this is about. And that’s why the president continues to punish these areas, be it California or Puerto Rico. If they’re not overwhelmingly Trump supporters, he doesn’t care about you.