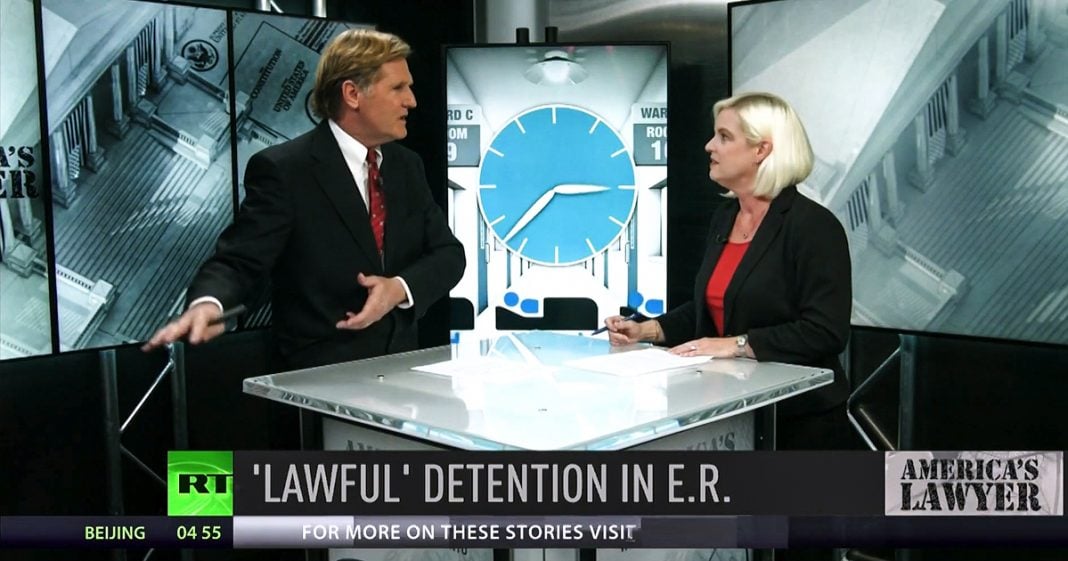 Via America’s Lawyer: Legal journalist Mollye Barrows joins Mike Papantonio to talk about how a New Hampshire woman ended up trapped in the emergency room for nearly THREE WEEKS upon being sedated by police, then committed by her daughter for psychiatric help. With legal action by the ACLU on the way, what does this woman’s de facto detainment in the E.R. say about the prioritization of mental health resources in hospitals nationwide?

Mike Papantonio:             The state of New Hampshire is facing legal trouble from the ACLU after a woman ended up trapped in an emergency room for weeks. During that time, she was forbidden from leaving as well as denied medical psych, psychiatric attention. What a crazy story, I’ve gotten Mollye Barrows here with me to talk about it. Mollye, walk us through this a little bit. You know, you hear the, you hear the surface facts and you go, no, there’s gotta be more here. What, what happened?

Mollye Barrows:                I know there is more but it’s tragically, it’s more in the realm of there, there are too many patients that are experiencing the same problem and I think it’s basically goes to the bigger issue that we aren’t doing enough to help people who have mental problems in this country. You know, you have 1.2 million somewhere in there that are basically incarcerated or in different sorts of holding facilities. They’re really experiencing mental problems and in this particular case, this is about ERs. So that’s what happens if you’re experiencing a mental collapse of some sort.

It’s ERs and jails and prisons that end up being, certainly jails and ERs that are the first line of defense. So in this woman’s case, she’s from New Hampshire, 61 years old. She’s one of a handful of defendants being represented by the ACLU against the state of New Hampshire for basically violating their due process.

Mike Papantonio:             Your schizophrenic, and rather than having an infrastructure in place in the United States where we can send them, they say, well, we have to keep you here because you’re a danger to yourself or somebody else.

Mike Papantonio:             That’s where it really gets ugly. In other words, there’s no court proceeding that says we can hold you, which would be Baker act.

Mike Papantonio:             That’s where you pose a threat. The other, the other problem is the emergency room has nowhere to dump.

Mollye Barrows:                That’s right. They’re there to fix the physically ill for the most part or evaluate the mental illness. And then the process is supposed to be that if they are deemed mentally incompetent or having a psychotic break or some sort of mental illness that requires further treatment, they’re supposed to be moved to a psychiatric facility. And then in this woman’s case, as in the case of the others that you were talking about, if it’s not a Baker act, but there’s a legal petition that has been signed either by a family member and or a medical professional that says they’re a danger to themselves or others, they’re supposed to be sent to a psychiatric facility and then have a court hearing within three days to be able to argue their side of it.

And in this case, this woman never did want to go to the hospital. She was having a bad day, she said. September of last year. Her daughter thought she was agitated and upset and was concerned. She called 9-1-1, the police showed up. She told the police she didn’t want to go, they thought she was agitated. Long story short, she was sedated, woke up in the ER, said, I want to go home. They said, no, an ER doctor and her daughter again signed that legal petition. But she sat in that ER for 20 days because there weren’t enough beds available. And that’s another issue that you’re getting to, not enough beds available.

Mike Papantonio:             Well, there’s nowhere, even outside of that emergency room, there’s no infrastructure for mental health to even send them because we cut, I think under Clinton we cut, the cuts were unbelievable. I don’t remember what the percentage is.

Mike Papantonio:             But they were big percentage cuts. So what, how does this manifest itself? With, since we don’t have any, we don’t have any way to take care of these people. Where, we mental health is way down on the, on the pecking order.

Mike Papantonio:             We see the shooting cases and then somebody will say, well, it’s not about guns, it’s about mental health. Probably some mixture of the true, of the two. But there’s other issues that, that’s manifesting themselves right now.

Mollye Barrows:                Absolutely. We’ve got addiction. You talked about the shootings. I mean there, you know, just check out any nightly news program and you’re gonna see some crime or some incident that’s happened that is alluding to mental illness. And there just simply aren’t enough resources, whether it’s people not feeling comfortable going to their psychiatrist for fear that their insurance companies are going to request their papers in order to justify covering the expenses. Or you have someone that, you know, the, the gosh, going back to the multiple shootings that we’ve had, the school shootings, the Parkland shooter in Florida.

Mike Papantonio:             There were no psychiatric facilities to take them in. As a matter of fact, psychiatric facilities actually sent them out the door and closed down. So now we’re seeing these a lot, most of these ACLU cases are really where the homeless goes in the hospital. They hold them there and there’s just, it’s no escape. I’ve got about 30 seconds. What types of restrictions did they put on her when she was in the hospital?

Mollye Barrows:                Housed for more than 20 days and basically, yeah, finally, when she got her chance to have a hearing, it was negated, but they were saying that never should have happened to begin with.

Mike Papantonio:             Okay. So no Baker act, no committal. She just is in emergency room in la la land, and we’re seeing this more and more, right?