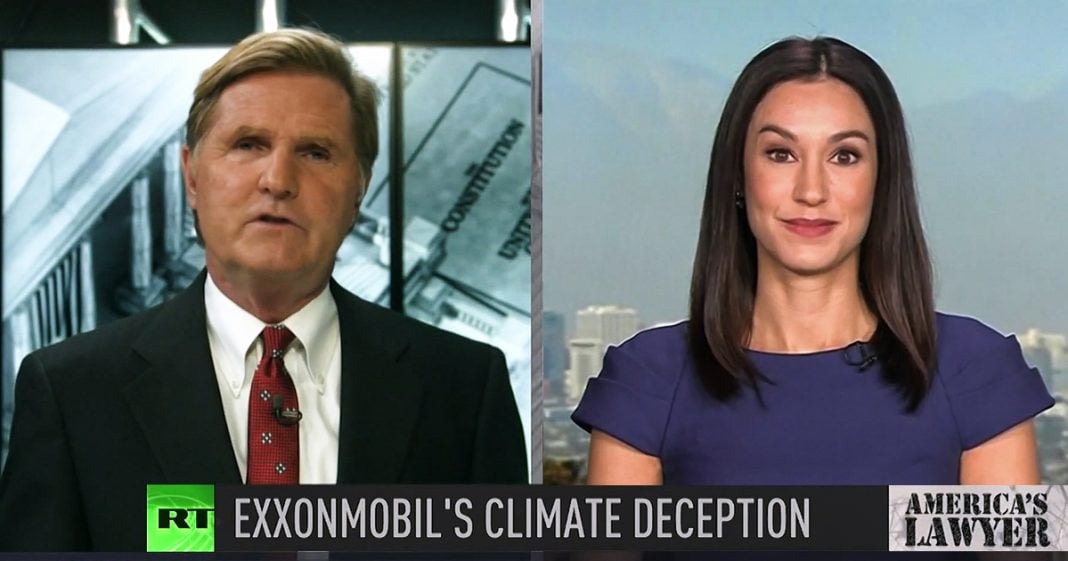 Via America’s Lawyer: RT correspondent Brigida Santos joins Mike Papantonio to walk us through a lawsuit brought forth by the Massachusetts Attorney General against ExxonMobil, alleging the energy giant has long been aware of its products accelerating climate change, yet chose NOT to disclose relevant studies that might hurt the company’s bottom line.

Mike Papantonio:             The fight to hold the world’s largest polluters accountable is getting more sophisticated. The attorney general of Massachusetts filed a lawsuit against ExxonMobil for violating the state’s consumer investor protection laws by not disclosing the risks of climate change. RT’s Brigida Santos joins me now to, more on that story. It’s a crazy story. Brigida, what can you tell me about this lawsuit to begin with? It’s been common a long time. The, the Massachusetts attorney general is probably one of the most courageous attorney generals we have in this country. Most of them are just useless as far as actually any kind of cultural or social engineering. This woman is far different. What’s your take?

Brigida Santos:                   Yeah, she’s incredible. When you read the text of this lawsuit, it is, it is just astounding. Now, attorney general Maura Healey from Massachusetts, basically outlined the entire case. Now the court documents reveal that for decades, ExxonMobil has intentionally misled state investors about and consumers about climate change to increase its short term profits, stock price, and access to capital. Now the company reportedly withheld information from investors that could have affected decisions about purchasing, selling, and holding ExxonMobil securities. Exxon of course is the world’s largest publicly traded oil and gas company. So this is a very important case to keep our eyes on.

Mike Papantonio:             Okay, so all the way back to the 50s the, Exxon’s own experts were telling the company that this is bad and the company ignored it. Instead what the company did is ignored the experts that were working in house that were telling them, yes, green, the climate change is real. Yes, we’re part of the cause with fossil fuels and yes, we may be on a course that if we don’t interrupt right now, might be irreversible. Their own scientists were telling them that as early as the 1950s. Then the, then they go out and hire biostitutes to say what they want them to say. Give me your, give me your understanding of that please.

Brigida Santos:                   Yes. Let’s run through some of the evidence here now. Since the late 1970s Exxon scientists and management reportedly knew that Exxon’s oil products were the leading cause of climate change and that if nothing was done to reduce greenhouse gas emissions, climate change would have potentially catastrophic impacts on the global environment and a substantial fraction of the Earth’s population. 37 years ago, Exxon scientists even predicted that in 2019 carbon dioxide levels would reach 415 parts per million, and that average temperatures would increase by 1.15 degrees as a result, and my God, they were right.

In may of 2019 this year, carbon dioxide concentrations in the atmosphere not only reached 415 parts per million, but they surpassed that level reaching the highest point in human history. And the company also confirmed there was a general scientific agreement that humans influence the climate through carbon dioxide released from burning fossil fuels. And that dramatic changes in global energy use may be necessary to prevent significant climate change, including the use of its own products.

Mike Papantonio:             Well, what they did is they, they had shareholders as early as 20 years ago that were saying, look, we’re very fearful that all this money we have invested in Exxon can go bad when all the lawsuits begin. When we have catastrophic climate changes along the coast. When we have insurance policies that will never pay for the damage that’s done, we’re going to be the next target. Their shareholders were telling them that and what the company then did, they went out and they hired scientists that would sign off on documents that were actually written by Exxon. Exxon would write the story. The scientist, they’d pay the scientist $1 million and they’d sign off and say, climate change is not real. That’s where we are right now. We know Exxon knew and that it didn’t take action to sharply reduce fossil fuel, and now we’re living with that, aren’t we?

Brigida Santos:                   Yeah, and look, they had a multimillion dollar consumer deception campaign that’s been in full swing since the 1980s. The goal is to strategically magnify uncertainty in climate science to curb fossil fuel reduction efforts. Now that campaign included publicly contradicting Exxon’s own climate scientists and tricking the public into believing that the role of greenhouse gas in climate change is not understood, even though it is. Exxon also funds front groups to publicly attack climate science and lobbies heavily to influence energy rules and regulations.

And it may soon even be rewarded a new government contract because president Trump recently said he wants to make a deal with ExxonMobil to tap Syria’s oil reserves. So this is a very powerful company. It’s not a victimless crime. All the people out there who do not believe that humans play a role in climate change are the victims of it. Not to mention all the people who have had their houses destroyed due to fires, you know, that are increasing, especially in California due to climate change. The list goes on.

Mike Papantonio:             Well, let me just tell you, this attorney general Maura Healey is she, she’s the leader in, in in cases that we should be interested in. Here’s what she knows. She has watched cases being brought in federal court throughout the country. Federal judges rather than being, whether it being hands on are always saying, well, we can’t really do anything. This is too big for the courts. We have to worry about congressional, we have to wait for congressional mandate to do something about this. And the truth is, Maura Healey has said, no, you know what? I’m through listening to that up here in New Hampshire, I’m going to do something as an attorney general.

Because the judges, the federal judges that time after time have, have, have dismissed these cases where I, I’ve read the pleadings there, there, there were a hundred ways to keep these cases in court, but the, the, the, the mantra from these federal court judges is no, we have to wait for Congress to do something. She saying, no, we don’t have to wait for Congress to do something. We’re going to bring this in state court up here. We’re going to get judges that aren’t so tied down to these notions that their hands are tied. Brigida, thank you for joining me. Okay.