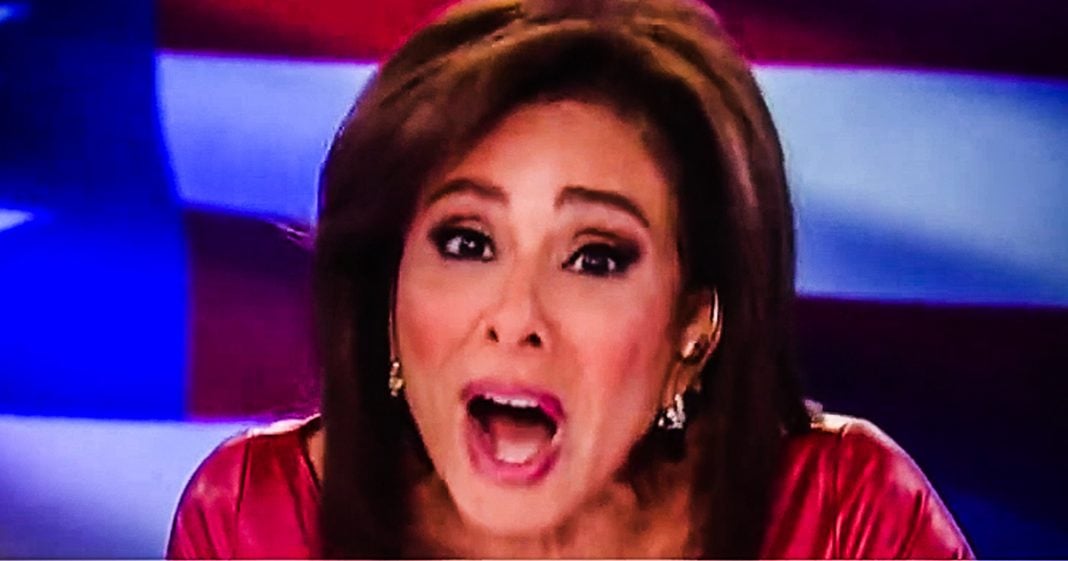 Jeanine Pirro is sick and tired of Democrats, and she isn’t afraid to let everyone know it. Unfortunately for her, her well-rehearsed rant came across about as well as a drunk man yelling at a bartender. Pirro never had a solid grip on reality, but it appears that she has now completely lost it, and Fox News could have a big liability on their hands. Ring of Fire’s Farron Cousins discusses this.

*This transcript was generated by a third-party transcription software company, so please excuse any typos.
Fox news host, Jeanine Pirro has never really had a solid grip on reality, but I think even that very light grip that she may have had came undone this past weekend when she delivered a profanity filled, slurred rant against the Democrats in defense of the president. Here it is.
[I say it’s more transparent. What a joke, this guy thinks he’s an emperor and they’re probably telling him his clothes are beautiful. There are no rules here. This so-called formalizing the impeachment inquiry puts the president in a worse place than any other president where impeachment was attempted and queen Nancy and emperor Adam’s world, Donald Trump has fewer rights in an MS13 gang member illegally crossing our Southern border. This is outright lunacy with the liars and the leakers and the leftists running the asylum with radicals resisting not just the president, but the law, the constitution, and the Americans who put this man in office, they take our laws and our constitution and they use them to distort them for their own illegal purposes and dammit, they’ve gotten away with it. Who the hell are these people who flaunt the law and get away with it? And they even laugh about the fact that their deep state is accomplishing its goal. The transcript makes it clear. There was no pressure. The guy on the other run didn’t even know military funds were not available. So how the hell can there be a quid pro quo and I am tired of protecting this whistleblower.]
Essentially everything Janine Pirro said in that little clip was was wrong and it was a lie and she delivered it very angrily. But as I already pointed out, she was slurring a lot, really, really slurring a lot there and folks, I got to tell you, don’t try to drink and pun-dent. It just simply doesn’t work. And you can’t convince me that Jeanine Pirro had not had at least a few drinks before she delivered that tirade. She had no filter like she was ranting and raving like the drunk guy down at the end of the bar who everybody’s trying to ignore, but he wants to make sure everybody can hear what he has to say about the president. It’s Democrats and emperor Schiff is just, he was not even wearing clothes, I guess according to Jeanine Pirro in that clip. She’s nuts folks. That’s not what a normal person would do, and yet Jeanine Pirro there she is, did it. Of course, she’s also the one who went hiking through the woods in the Northeast looking for Hillary Clinton. So as I said, she’s never really had a tight grip on reality, but I think maybe she’s hitting the sauce a little much and is therefore lost whatever little bit of grip she may have had. But let’s get down to it. Right. Let’s, let’s not speculate about whether or not she’s got a drinking problem because I think it’s obvious she does. Let’s talk about the substance of what she said, the very little bit of substance of what she said. This is not the Democrats trying to undo an election. This is not the Democrats attacking the constitution as she claims this is Democrats actually upholding the constitution, sticking to the constitution and doing what the constitution tells them they’re allowed to do. I don’t understand how Republicans don’t understand that except for the fact that I think they do understand it. They just want the public to not know that because they think the public’s as stupid as they are and the public truly isn’t. The polls are reflecting that right now. The public understands, no, this is not a deep state coup that the Democrats are trying to carry out. They’re following the rule of law. They’re doing what they need to do. All these Republicans who claim they’ve been shut out have not actually been shut out except for the ones who aren’t on the committee and even some of those who are on the committees claimed to be shut out because they voluntarily chose to not go and sit in on the hearings. The Republicans have lost their collective minds at this point, folks, and I think that’s what’s driving people like Jeanine Pirro a little bit crazy. They don’t know what to say. They can’t defend what happened and so maybe more and more of them are going to turn to the bar to let off a little bit of steam. My only advice is that you don’t try to do that and then go get on the air or else you’re going to pull a real Jeanine Pirro there.