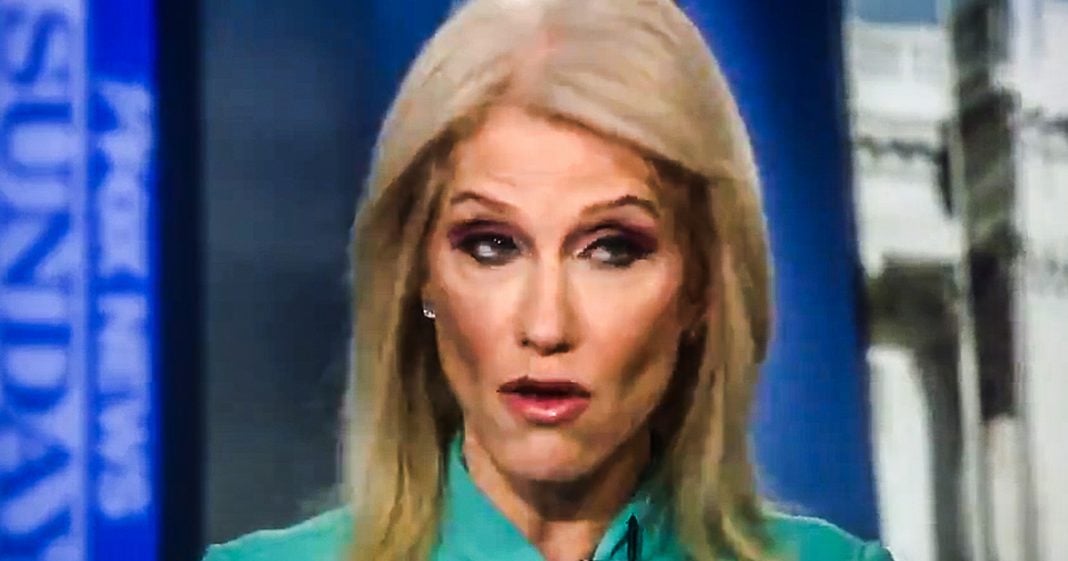 White House counselor Kellyanne Conway appeared on Fox News over the weekend to talk with Chris Wallace about the impeachment inquiry, and it didn’t go the way that Kellyanne had expected. She thought she was walking into a softball interview, but Wallace aired his legitimate concerns about the inquiry, as well as those of Republicans in the Senate. Ring of Fire’s Farron Cousins explains what happened.

*This transcript was generated by a third-party transcription software company, so please excuse any typos.
Kellyanne Conway is finally back on our TV screens and as predicted, she was out there defending Donald Trump’s perfect phone call with Ukrainian president Zelenskyi. Unfortunately for her, Chris Wallace on Fox news wanted actual answers to the questions he was asking and didn’t get them. And that made Chris Wallace more than a little unhappy. Here’s the exchange that took place yesterday on Fox news Sunday between Fox news host Chris Wallace and Kellyanne Conway,
[Washington post reports that a growing number of Republican senators are concerned about the evidence that’s come out and are suggesting, perhaps they will say that yes, the military aid was dependent on Ukraine investigating the Bidens, that it was a quid pro quo, but that that is not an impeachable offense. Would president Trump accept that as a way to get out of this controversy? You act like somebody giving you a plea bargain for a lesser offense of what crime is he being accused and when will he have a chance to face the judge, jury, and executioner? Chris would those Republican senators are saying theirs- They’re broadcasting to you and the rest of the world. I’m not going to be one of the 20 Republicans who goes with the Democrats and removes a democratic electoral president of the United States just because the Democrats can’t figure out how to get him out through our democratic system. Certain though that the evidence doesn’t look good for the present. Well, what they’re concerned. I think what the reason you saw every single Republican vote against the impeachment increase because they have not seen evidence of a high crime or misdemeanor so much so they couldn’t even vote to have the inquiry go forward because of the way the inquiry has been so flawed.]
See, what’s fun for me about that clip is the fact that Chris Wallace didn’t care what Kellyanne Conway had to say when she went off on these tangents. Now, typically Fox news host, when they talk to anybody, not just in this administration, but really anybody on the right, they’re going to let them go wherever they want to go. They can miss direct the public. They can lie to the public, they can just do whatever, but I think Chris Wallace understanding that he may be the only actual news reporter left at the network, didn’t want to hear any of it. He kept trying to pull her back to the issue at hand and she just kept driving down her crazy little road wherever the heck she wanted to go and that’s why not featured in that part of the clip. But you can check out the whole clip and the link in the description of the video. At the end, Chris Wallace was just like, all right, yeah, I’m going to talk about other things with other people later so you can watch that if you want Kellyanne, but thanks for your time. He didn’t want any of it. He couldn’t stand it anymore because you don’t get the truth from Kellyanne Conway. You don’t get answers from Kellyanne Conway and it is completely a waste of everyone’s time to even put this woman on the air. But as we had discussed just a week or ago, the white house had essentially been hiding Kellyanne Conway from the public. She was not going on TV. They weren’t sending anyone actually on TV for quite a while because they didn’t know what to do. They didn’t know what to say, and they were worried somebody who was going to pull a Mick Mulvaney and just make the situation so much worse by admitting as Mulvaney did that they withheld aid as part of a quid pro quo with Ukraine. But I guess now they’ve got their talking points in order, and so they sent out their loyal lapdog Kellyann to go deliver those talking points. And even though Chris Wallace didn’t want to hear it, Kellyanne did a good job of sticking to the administration approved talking points, which is to basically just trash the Democrats say that the call was perfect and then trashed the Democrats a little more over procedures while ignoring the obvious evidence that is getting more and more abundant by the day that Donald Trump definitely committed a crime.