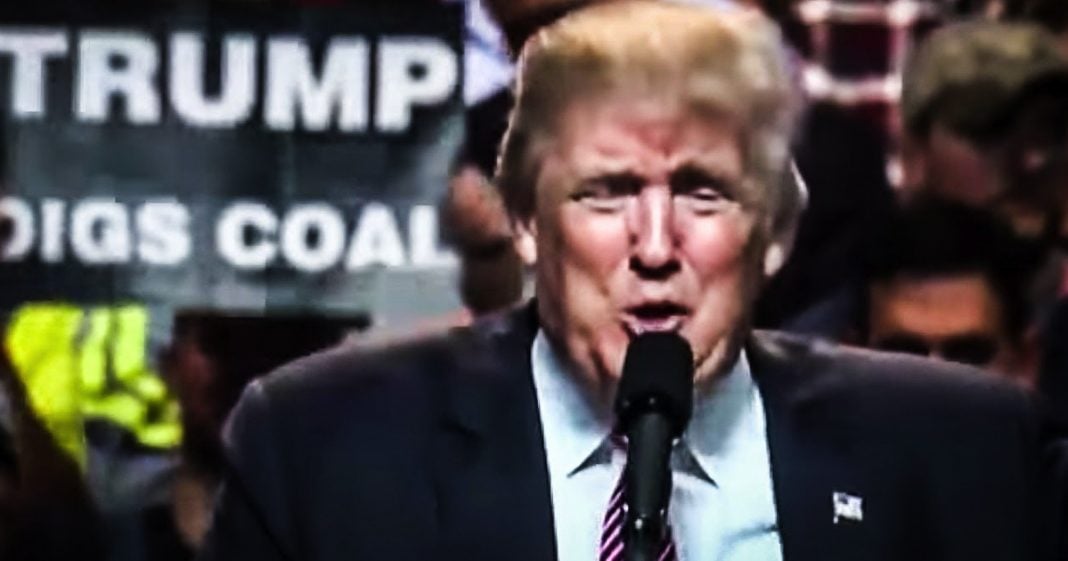 Donald Trump promised coal miners that he would bring their jobs and industry back to life if elected, and they voted for him based on those promises. This week, another coal company filed for bankruptcy, marking the 11th coal company to go under during Trump’s administration. People are hurting and need relief, but this president isn’t going to offer it to them as Ring of Fire’s Farron Cousins explains.

*This transcript was generated by a third-party transcription software company, so please excuse any typos.
It’s no secret that Donald Trump lied his way into the U S presidency, telling, uh, audiences at rallies for months and months and months, all these grandiose things he was going to do only to turn around and not do any of them. That includes building the wall, that includes lowering prescription drug prices. That includes working out a better trade deal for American citizens. And it also includes telling coal miners that he was bringing coal back here to the United States. And to me, that may be one of his most important and biggest and most damaging lies of the campaign. And quite literally of his entire administration. Maybe not the most important, but folks, it is one of the most important because here’s what’s happening in the United States today. Actually, before I even tell you what’s happening, let’s go back in time a little bit. He told coal miners at rallies, he held up their signs. Trump digs coal. He had the hat, Trump digs coal, you know, do it as macho I’m a coal miner with you guys, even though he’s never touched a piece of coal in his life. And they, they bought it. They thought, you know what? Our industry is dying. We’re blaming Obama for it. Even though our bosses have publicly admitted that that’s not the case, but we’re gonna vote for this guy because he’s going to save our jobs. It didn’t happen this past week. Marie energy became the 11th coal company to file for bankruptcy since Donald Trump was sworn in as president of the United States, 11 coal companies. And again, this is Murray energy. This is a massive heavy hitter in coal here in the United States. It’s not Joe’s Cole down the street. This was a one point a multi hundred million dollar in revenue per year company and it died this week and it was the 11th major coal company to die since Donald Trump promised to bring coal back. But here’s the thing. Recent polls have shown that a majority of coal miners, even in these red States, would support the green new deal, not just because it saves the environment, because basically they’re the ones who would be promised these new jobs in the renewable energy sector and they want to get out of coal because they know it’s dying now. There’s no more denying it. They understand it can’t come back and it shouldn’t come back. Make no mistakes. Folks, when I’m talking about things like these, I’m not crying over the fact that a coal company went out of business. I am upset over the fact that people lost their jobs, that people do not have an income anymore. That’s where my concern is with the people and we need to put them to work in the renewable energy sector, which is the fastest growing sector and energy in the world, not just in the United States and folks. We could be the leaders in this, but other countries are catching. We’re falling behind. We could regain the lead, grow leaps and bounds above everybody else, but we have to have the workers and the workers are there. The workers are right now out of work. They’re losing their jobs. Coal is only generating 27% of electricity in the United States as of last year, and that number continues to fall. Global demand for coal is also falling, and that’s actually the biggest factor in why these coal companies have gone out of business. And I know this because this is something I have been writing and researching about for the last eight years during the Obama administration writing for D smog blog, having to explain on a monthly basis that the war on coal is not real, that regulations weren’t killing coal industry. Supply and demand was basic. Capitalistic economics killed it. So I know what I’m talking about here. And in spite of the fact that Donald Trump has rolled back 85 different environmental regulations that were meant to kickstart the coal industry, nothing has worked. Our air’s gotten dirtier, our water has gotten dirtier, and we’ve lost a heck of a lot of jobs because coal isn’t and shouldn’t come back. What should happen is that all of these coal miners who’ve lost their jobs should be the very first ones that we choose. When we passed the green new deal to create all these green new jobs, once we’ve got all the coal miners and out of work energy sector, people set in place, then we reach out to other people. Well, we’re losing a big industry here. There’s no denying that. So those people do need to go first. They need those jobs. They know energy. Let’s put them back to work. They want to go there, let’s put them back to work. But more importantly, their communities need those jobs. So let’s put them back to work by enacting the green new deal.