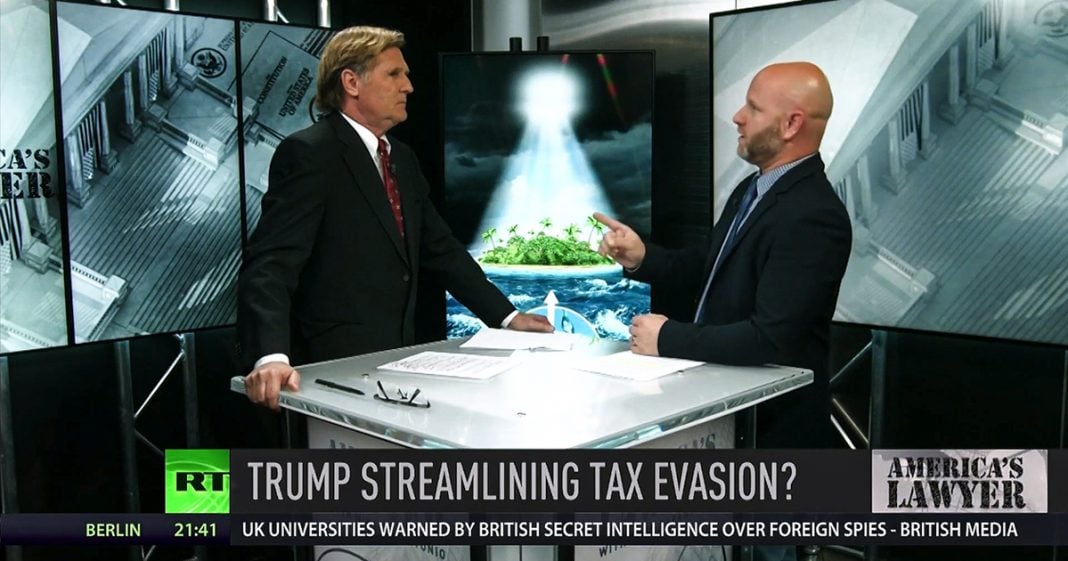 Via America’s Lawyer: Trump may be rolling back legislation originally enacted to stop businesses and individuals from dodging taxes through offshore tax havens. Mike Papantonio and Farron Cousins discuss.

Mike Papantonio:             The treasury department wants to make it easier for corporations to hide money offshore, which is what you’d expect when a billionaire is in charge of our economic policy. What a disturbing story. This is the, this is what’s happening, the corporation sends money offshore. Okay. Billions of dollars. Billions of dollars offshore. Okay. Then the offshore company loans money to the company here in the United States that sent the money offshore, the same company. Then the company in the United States actually gets a tax benefit by writing tax deductions for the interest that they pay from the loan, from their own company.

Farron Cousins:                  I mean, this is absolutely a scheme that corporations are running and as you said it, they’re paying interest to themselves, writing off that interest and Mnuchin who again, he’s a billionaire.

Farron Cousins:                  She had him, one of the masterminds behind it, and instead said, as they usually do, we’re just gonna fine you instead of throwing you in jail. And now, now he’s making policy.

Mike Papantonio:             This, this tough tough candidate, Kamala Harris. What a fraud. Okay, so this story now, now if you pick up on this story, where does it go?

Farron Cousins:                  Well, we’ve got $2 trillion corporations are hiding overseas. US government’s losing $184 billion a year off of that. And they want to make it easier for them to hide more money over there with these new rules that Mnuchin’s putting in place, as you said, to allow them to stash it over there or basically make, you know, something like the Cayman islands, their new headquarters. They still want to be considered an American company, but there’s nothing American at all about what they’re doing.

Mike Papantonio:             Okay. Remember, remember the story, if we lower the corporate tax rate, they’re going to buy into America more. They’re going to hire more workers. They’ve got to do, engage in R and D here in America. We lowered it to 21% and when that happened, everybody was saying this is a total utter scam. It’s a fraud. All they’re gonna do is take all this extra money they have, they’re going to ship it offshore and now we see what they’re doing with it offshore. They’re, then the real sting comes in where they, they loan $1 billion back to the American company, they pay interest on the billion dollars and the IRS says, oh, that’s okay. You can take it as a deduction.

Farron Cousins:                  And in many cases, they borrow so much money from themselves that they report operating losses and pay no taxes at all.

Mike Papantonio:             Okay. But don’t, don’t we have Trump, don’t we remember Trump saying, we got to stop this offshore scam? Wasn’t that what he ran on? We got to stop corporations for offshoring. We have to stop corporations for outsourcing jobs to third world countries. We have to stop all that. And now you look at this and this munchkin, I like to call him, the munchkin. The little devil munchkin is saying, no, I have my shot right now to pay back the Goldman Sachs types and all the big corporations who put me here. And what I’m going to do now is I’m going to, I’m going to run through this. Trump is never going to know what’s happening. That’s what, that’s what’s going on.

Mike Papantonio:             And if Trump does know what’s happening, I don’t think he’d get in the way anyway. But I doubt he really even understands the nuances to what’s taken place here. Here we have a situation where we’re cutting food stamps. Families don’t even have enough money to pay for food. We’re cutting food stamps and we’re passing it on to these corporate thugs and their offshore banking. It’s disgusting. Thanks for joining me. Okay.