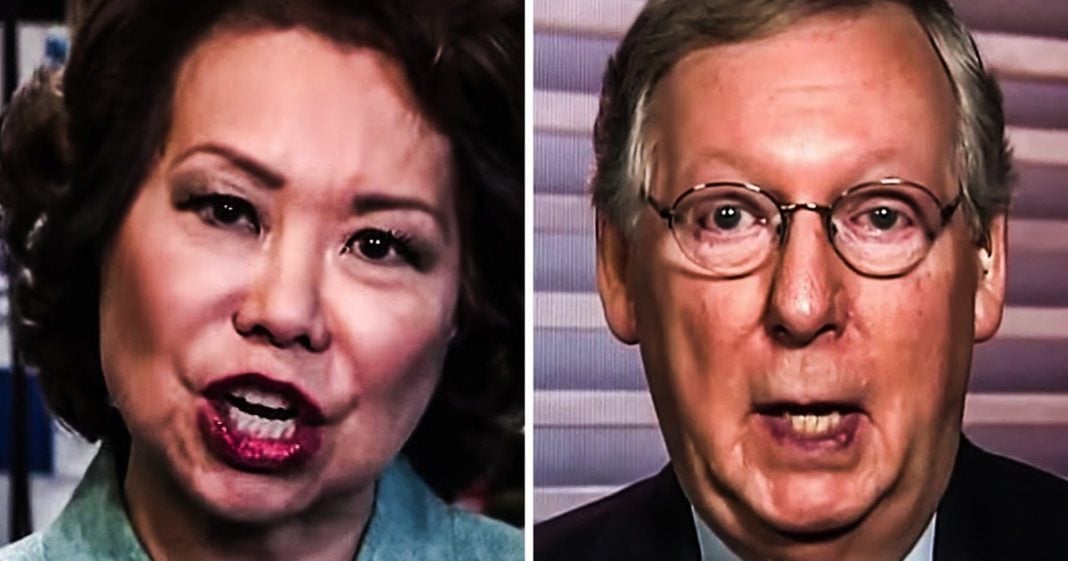 Mitch McConnell is in a very unfamiliar place. His approval rating among Kentucky voters is dismal, his opponents are raising tons of cash, and his wife is under investigation for sending contracts to his donors. McConnell has also hitched his wagon to the most unpopular president in modern history, and all of this combined could easily cost him his senate seat in 2020. Ring of Fire’s Farron Cousins discusses this.

*This transcript was generated by a third-party transcription software company, so please excuse any typos.
Republican Senate majority leader, Mitch McConnell has a lot, a lot of problems right now. According to the latest round of polling, Mitch McConnell stands at a paltry 18% approval rating among Kentucky voters, and let’s keep in mind that Mitch McConnell is the longest serving us Senator in the history of the state of Kentucky. This latest poll also show showed only 37% of respondents in Kentucky said they’re going to vote for McConnell in 2020 when he’s up for reelection only 37% I don’t know if Mitch McConnell understands this, but you can’t win an election with only 37% of the vote. He’s also in trouble because his democratic opponent is raising money hand over fist because Mitch McConnell has become the new Ted Cruz. And is just kind of universally hated across the country. That’s why Beto O’Rourke did so well against Cruz because he was raising money from outside the state, and that’s exactly what to Mitch McConnell’s opponent is doing. Mitch McConnell is suffering this fate. Not only because he hitched his wagon to Trump, but a lot because he hitched his wagon to Trump. And that’s what’s happening to lots of Republicans across the country. We’re seeing these state by state races right now, the polling from those races favoring the Democrats, you know, swing districts that Republicans currently hold our polling heavily in favor of Democrats, senators who have held their seats for decades like McConnell polling now as favoring the Democrats fundraising, same way favoring the Democrats and McConnell who wants seem like a safe bet. The guy wasn’t going anywhere. Now suddenly finds his very seat as the Senate majority leader in jeopardy. That’s big. And that’s important. And hopefully this trend continues. And again, a lot of it is because he’s backing Donald Trump the most unpopular Republican president in our lifetime. Those of us who were born after Nixon resigned from office like myself. But here’s the thing, it’s not just Donald Trump. McConnell also has several other problems. Again, something we spoke of recently where you had all those black lung victims that people suffering from black lung, dying from black lung took the 10 hour bus ride to DC only to be snubbed by Mitch McConnell. Those were his supporters and he wouldn’t even talk to them. They got angry. That story ran for quite awhile in Kentucky and other people got angry too and they saw what this man really stands for. He doesn’t care about us. He doesn’t care about the people that have kept them in office for over 30 years. So why should we care about him? He’s got another problem, a bigger problem. This one, a potentially legal problem and that is the fact that his wife is currently under investigation. Elaine Chao, the secretary of transportation, because she has allegedly had been funneling money to Mitch’s donors in Kentucky giving them these lucrative contracts that they are not qualified for given Kentucky more contracts than any other state meeting with Kentucky contractors more than any other state’s contractors. And now she faces a very serious investigation that also threatens Mitch McConnell himself. The dude is in trouble and he deserves to be in trouble. Mitch McConnell has been horrible since the very first day he stepped onto that Senate floor and it’s not going to end until the very last time he steps onto that Senate floor and hopefully voters in Kentucky do the right thing and they end his tenure. They end his reign, they end his oppression and his obstruction, and finally say, Mitch, come on back to Kentucky. We’d like to have a word with you.