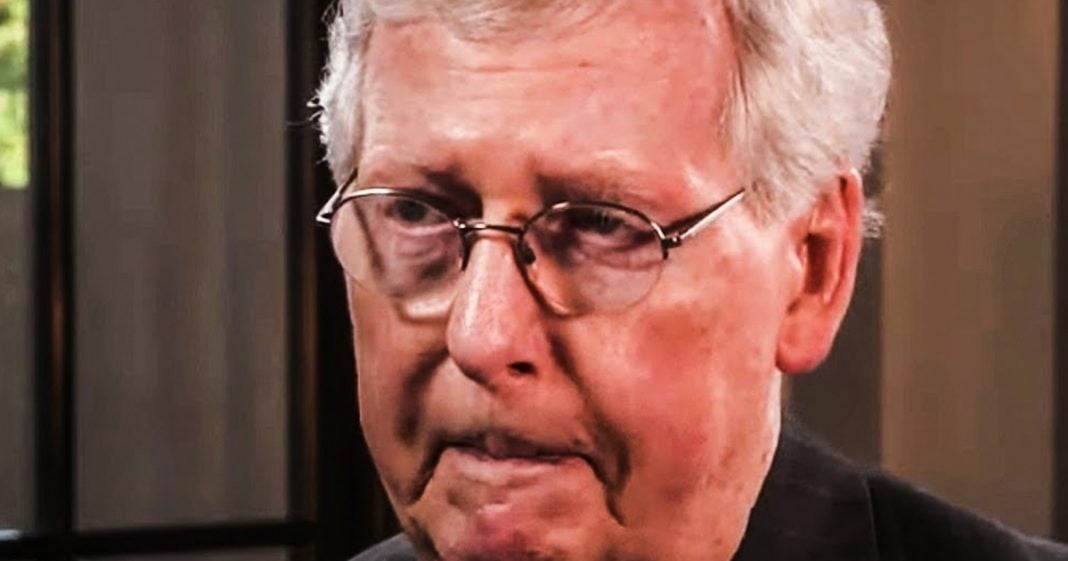 According to reports, Republican senate majority leader Mitch McConnell had to have a one-on-one meeting with Donald Trump at the White House last week to remind him that he can’t attack Senate Republicans, like Mitt Romney, who will be the jurors for his impeachment trial. Trump has a habit of lashing out angrily at any Republican who questions him, and now that could come back to bite him. Ring of Fire’s Farron Cousins explains what’s happening.

*This transcript was generated by a third-party transcription software company, so please excuse any typos.
Donald Trump doesn’t seem to understand that Republicans in the Senate are the ones who control his fate. And last week, Mitch McConnell had to have a little one-on-one powwow with Donald Trump in the white house where he told Donald, you got to stop attacking Senate Republicans because ultimately we’re the ones who vote as the jurors in your impeachment trial. Now, McConnell had this meeting again, this was last week, not this past week, the one after that, or one before that. Excuse me. This was at the time when Donald Trump was relentlessly going after Mitt Romney because Romney offered very mild criticism of the president and his actions with Ukraine regarding the Bidens. Donald Trump went off, attacked him, sent out these videos on Twitter, calling him a loser, showing how horrible he was as a politician. And then Mitch McConnell had to go and say, Hey, listen, I know you’re having fun with your little Twitter fight here. Um, this dude’s going to be voting for you or against you in the Senate trial. And he’s actually pretty well liked in the Senate. You know his, his, his niece does run the Republican party as it were. So could you not, maybe could you do something smart for once in your life and not attack the people who could easily say, get the heck out of DC. And at that moment, surprisingly the attacks on Mitt Romney stopped. And then suddenly this week, as we’ve already discussed, Donald Trump comes out with a new plan and says, Hey, struggling Republicans. I’m going to go raise money for you. How about that? I’m your best friend. Now. I’m going to give you money and you’re going to protect me in the Senate. but this isn’t going to last. And that’s the best part of this. Mitch McConnell did call him the president down for about a week and a half, and the next time a Republican comes out and says, gee, I’m not so sure about what Trump has said here. It’s going to start all over again. Maybe it’ll be Mitch McConnell, not Mitch McConnell’s teaching Mitt Romney this time. Maybe it’ll be somebody else this time. Maybe it’ll be a different one. We’ve already seen Lindsey Graham attack the president for his decision, uh, to pull troops out of Turkey or, or, or in Northern Syria. And then of course, you know, you had a him backtrack on that and say, no, actually I’m okay with that now. So it’s not going to be Lindsey Graham. It’s not going to be Ran Paul is probably not going to be Mitch McConnell, but eventually another Republican Senator who controls Trump’s fate is going to say something Trump doesn’t like. He’s going to attack them and then Mitch McConnell is going to be right back in this situation. The only question is how much more is Mitch McConnell gonna take? How many times is it getting? Is he going to have to have these little meetings with the president to say, stop this before he gets sick of it and says, you know what, you’re on your own bud. I’m not gonna play babysitter to you anymore. I’m not going to go whip up my Republicans and tell them they have to defend you and support you. When you turn around and you borate and attack these already struggling Republican senators and eventually you could cost us our majority in the Senate. That’s not worth it. So you’re on your own. I feel like that day is not that far off. Maybe it’ll never come or maybe it’ll happen a lot sooner than we think.