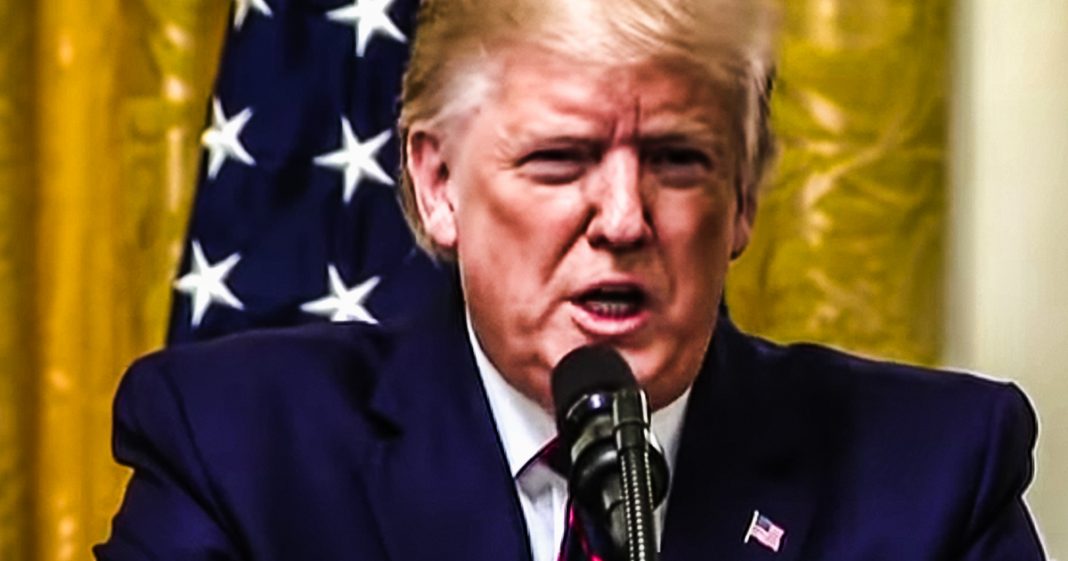 Former Harvard psychiatrist Dr. Lance Dodes didn’t mince words during a recent conversation with Salon.com when he said that Donald Trump is a successful sociopath. Dr. Dodes says that Trump only cares about his own well-being, and his presidency has just been an extension of his sociopathic tendencies. He’s completely accurate in his description of the President, as Ring of Fire’s Farron Cousins explains.

*This transcript was generated by a third-party transcription software company, so please excuse any typos.
Psychiatrists and other mental health professionals are tired of mincing words about Donald Trump’s mental health and they’ve now come out and been very blunt about the fact that the president is not well. Earlier this week, a former psychiatrist and psychiatry professor at Harvard university, dr Lance Dodes as came out in an interview with salon.com and straight up said that Donald Trump is a successful sociopath. I want to read the direct quotes from dr Dodes here. His focus on his personal benefit at any cost is why he’s assessed a successful sociopath. You know, I can see Donald Trump for who he really is and it’s because he has the training and he taught people how to recognize these things. It’s very hard to get this across to the public because every time people talk about him, they start out with the unspoken unconscious assumption that he’s basically like the rest of us, but in order to explain and predict Trump’s behavior, you have to begin with awareness that he is essentially a predator. Once you keep in mind that Trump lacks a conscience and lacks empathy, he becomes very easy to follow. Unlike normal people who are complex, he’s basically running on a very simple and very disordered program and that is protect me at the cost of everyone else. That’s what Donald Trump does and that is exactly how dr Dotas here explains it. Donald Trump cares only about himself and his money. So I did a little digging into this and wanted to come up with, you know, is Donald Trump in fact a sociopath and when you look up the common traits that you see with a sociopath as described in the DSM five here are some of the diagnostic criteria of what makes a person associate path or how you arrive at that diagnosis. First one, glibness and superficial charm. President’s got that. The superficial charm. Absolutely. That’s what we see at the rallies. That’s what we see from him on the campaign trail. There’s no depth to it. Manipulative and conning. Yeah, I’d say that describes his entire life. Grandiose sense of self. I don’t know. Do you think the quote, very stable genius who’s made more progress as president than anybody else in history according to himself? Do you think he has a, a grandiose sense of self? Tricky one there, right? Pathological lying speaks for itself. Lack of remorse. Shame or guilt. Yeah. Shallow emotions obviously, and capacity for love. Yes. We’ve seen that need for stimulation now. Okay. There’s another one need for stimulation. Plenty of people have talked about Donald Trump’s ADHD in the past. How he always gets fidgety and needs to be doing something during meetings. That’s part of it now that’s, those kind of seem like little harmless quirks, but apparently it’s a symptom. Callousness and lack of empathy. Yes. Um, impulsive nature. Yeah. early behavior problems slash juvenile delinquency. Maybe not. I don’t know enough about that. So maybe he doesn’t fit every criteria. Uh, irresponsibility and unreliability. Yeah. The guy would rather be golfing than do anything that resembles work. So that’s pretty irresponsible. uh, here’s a good one. Promiscuous sexual behavior and infidelity, lack of realistic life plan and a parasitic lifestyle. I think that actually applies more to Donald Trump’s kids. And criminal or entrepreneurial versatility. Oh, he’s proven to be very versatile as a criminal. Right? Here’s the thing, folks. Those are the criteria. These are the diagnostic standards for a textbook sociopath. That is what we’re dealing with in the white house. Not to mention the fact that pretty much any mental health professional who’s spoken out publicly about Donald Trump has warned us of the same thing. We can’t deny this anymore. We can’t ignore this anymore. We have to start taking it very seriously, and I’m hoping that the 2020 candidates understand that they’re dealing with a sociopath and adjust their plans accordingly. Cause this guy’s going to get dirty. He’s going to get desperate, and he’s going to get crazy to stay on message, talk about the issues, don’t get dragged in his personal feuds, and you should be able to do just fine. And hopefully we can send this sociopath back to his ivory tower.