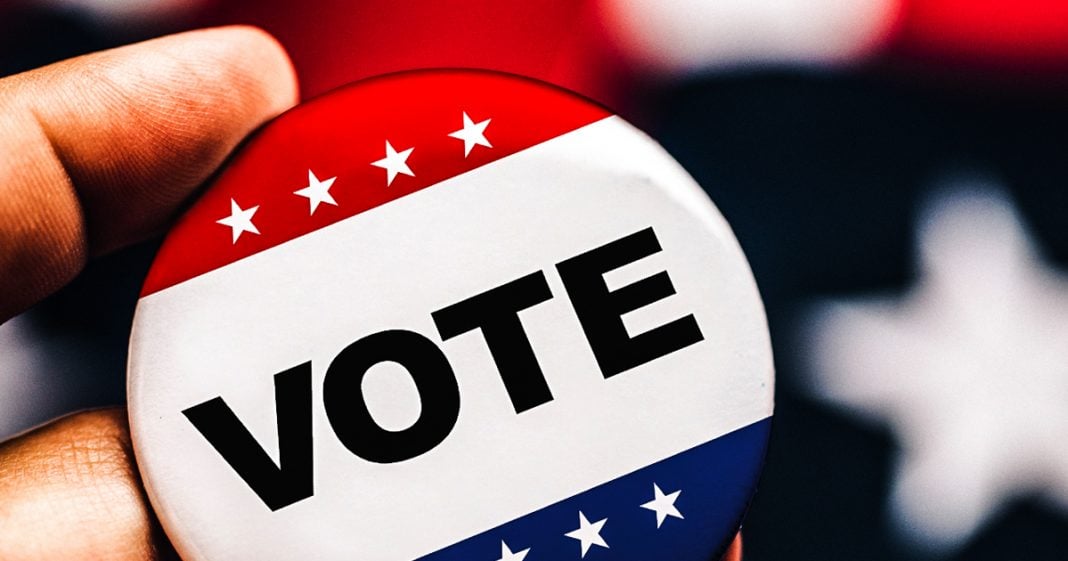 The state of Georgia is working overtime to get more people off of their voting rolls ahead of the 2020 elections. After purging more than half a million voters before the midterms, the state was still a close call for Republicans, and they don’t want to take any chances in 2020. Ring of Fire’s Farron Cousins explains what’s happening.

*This transcript was generated by a third-party transcription software company, so please excuse any typos.
In last year’s midterm elections, we saw the state of Georgia come about this close to turning blue when Democrats, Stacey Abrams, barely by 1.4 percentage points lost to Republican Brian Kemp. And she lost that election even after massive voter suppression and other voter irregularities in the state. And the fact that prior to that midterm election, the state of Georgia, the Republican secretary of state, had purged more than half a million people from the state’s voting rules. Stacey Abrams still came within 1.4 percentage points of becoming the first black female Democrat governor of the state of Georgia. And after seeing that last year, the state of Georgia says, we’re not taking any chances that was too close to call even after we purged half a million people and did other screwy things behind the scenes that should be investigated but likely never will. So this year, the state of Georgia has announced that they’re about to kick another 330,000 voters off the state’s voting roles. And they’re doing it because they passed a law not that long ago that says, if you haven’t voted in two years, you get kicked off the voting rolls. Meaning for most folk, if you miss one single election, you’re out. You’re done. Except now they actually do have a new rule where they have to let you know first because the half a million people I mentioned before, they didn’t have to tell them in advance. They just kicked them off. And if you don’t know that and then you show up to vote on the election day, oops, you don’t get to vote because they don’t have same day voter registration. And now 330,000 more people are about to be kicked off by the end of this year in anticipation of yet another tight race in Georgia in the 2020 presidential election. But again, they have to send out a little mailing forms. They have to say, Hey, you didn’t vote in the last two years, meaning you didn’t show up for the midterms. Uh, so we’re going to kick you off unless you reply to this letter that we’re sending you. And say that, yes, I’m still a voter. Yes, I’m still here. Do not kick me off. If people in Georgia do not fill out that little form that the state is supposed to mail them, and I’m willing to bet that when the time comes, we’re going to see reports of millions, or excuse me, thousands of people who never got the letter because that’s how the state of Georgia operates, but they’ll claim they sent it, but they probably never did anyway. If you don’t return that, you’re gone off the voting rolls and you won’t know it until the day you show up to go and vote. That’s why this story is so important because those 330,000 people they want to kick off. That represents a 4% reduction in the total number of people on the state of Georgia voter rolls and the last election was decided by 1.4% and they’re kicking off 4% this is voter suppression. This is Republicans trying to make sure that they don’t lose power in that state and that the state overall doesn’t turn blue in the next presidential election. That’s all Republicans know how to do. They’re losing touch with voters. They have no new plans. They have no new policies. Their elderly base is dying off. The only way they can stay in power is through a combination, a combination of voter suppression and gerrymandering, and even the gerrymandering’s not working so well for him anymore, but the voter suppression is, this is our biggest obstacle in 2020. Polls show right now that pretty much any Democrat is going to beat Donald Trump. But with voter suppression, once you factor that in, that race suddenly becomes a little tighter. And in States like Georgia that could be just enough to give Donald Trump the edge and another four years in office.