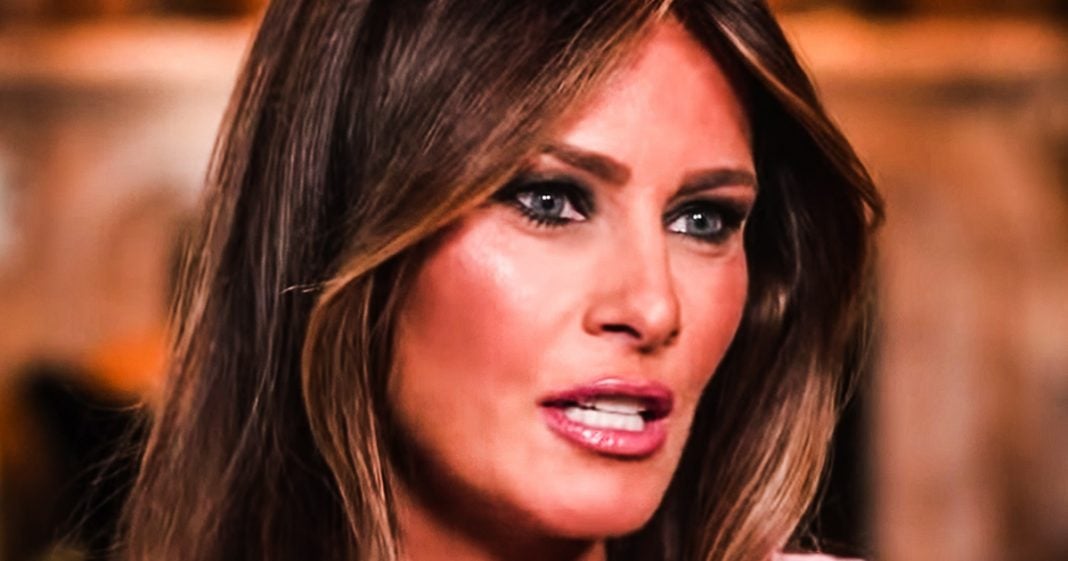 During a fundraiser at his own DC hotel this week, Donald Trump told the crowd of Republican donors that Melania wouldn’t even cry if he got shot. That was a weird thing to bring up, and an even weirder thing to admit publicly. Clearly there are some relationship issues there, and it is hard to take the First Lady seriously when she obviously despises her own husband. Ring of Fire’s Farron Cousins discusses this.

*This transcript was generated by a third-party transcription software company, so please excuse any typos.
You know, there’s been lots of discussion over the past few years about Melania Trump and whether or not she actually cares about Donald, whether he even cares for her. Is this a Loveless marriage? Does that matter for anything in the political realm? Well, earlier this week, Donald Trump decided to bring up the fact that his wife really doesn’t care about him during a fundraiser at his own Washington DC hotel. Now, during this fundraiser, Donald Trump spoke for more than an hour to wealthy Republican donors, and he heaped some criticism on Democrats and some Republicans. But he also heaps him praise on some Republicans, particularly Steve Scalies, the a Republican lawmaker who was shot at the congressional baseball practice a couple of years ago. And that’s when things got weird. Here’s what Donald Trump had to say. Uh, he said that Scalia’s wife cried her eyes out when I met her at the hospital that fateful day. I mean, not many wives would react that way to tragedy. I know mine wouldn’t. So, so, so if you were shot and you were taken to the hospital and we weren’t sure if you were going to live or die, Melania, according to you, Donald, your wife, the woman you chose to spend the rest of your life with would just be like, all right, Now on this particular issue, this happens to be one of the times I agree with Donald Trump. I do not think for a second that if he were shot, Melania would shed a tear. And that’s not because I think Melania is an emotionless robot. I don’t believe she is at all. We’ve seen her be happy, not when she’s ever around Donald Trump, but we’ve seen her in other instances, she can be happy, she can laugh, she can show emotion and actual human feelings. She just doesn’t have any towards Donald Trump. So again, why is this important? Why are we even bothering to talk about this? Where there’s a reason Trump right now at this fundraiser on a Wednesday of this week, I believe it was said his wife doesn’t care about him. His wife doesn’t care about him. She is the first lady of the United States. She has initiatives and plans be best, right? How are we supposed to take her seriously when she doesn’t even care enough about her husband according to him to shed a tear if he gets shot? The answer is we can’t. You know, we knew from the beginning she wasn’t serious about this whole be best thing because she never wants, decided to call out her husband for his boarish behavior but if she wants us to take her seriously as a first lady, somebody who is taking her responsibility seriously held at the very least, somebody who at least gives a dang about her husband. Well Trump just ruin that for her earlier this week? I have no doubt, no doubt whatsoever in my mind that shortly after Donald Trump leaves office, whether it’s six months from now, a year from now, or God forbid, four and a half years from now, she’ll divorce him. She’ll divorce him pretty quick. That is assuming that she can suffer through him with the remaining days he has in his administration, and I don’t even know that she’s willing to do that. It’s not fair to her to stay in this Loveless marriage, but at the same time it’s also actually not fair to Donald Trump. As horrible as he is, as many times he’s cheated on her. Yeah, still unfair. Both of them are using the other, and I guess Republicans think that’s a good enough example for our children. Right? Their religious rights still stand by him. They joined him yesterday and all laid their hands on him and prayed for him, prayed for God to protect him from impeachment, ignoring the fact that this man is absolutely using his wife, she is using him. There is not one bit of emotion between the two of them at all, and yet they’re the ones who always tell us that the sanctity of marriage is one of the greatest things on the planet. They just keep overlooking the fact that the guy they’re laying their hands on doesn’t care about his marriage and clearly his wife, according to him, doesn’t care about him either.