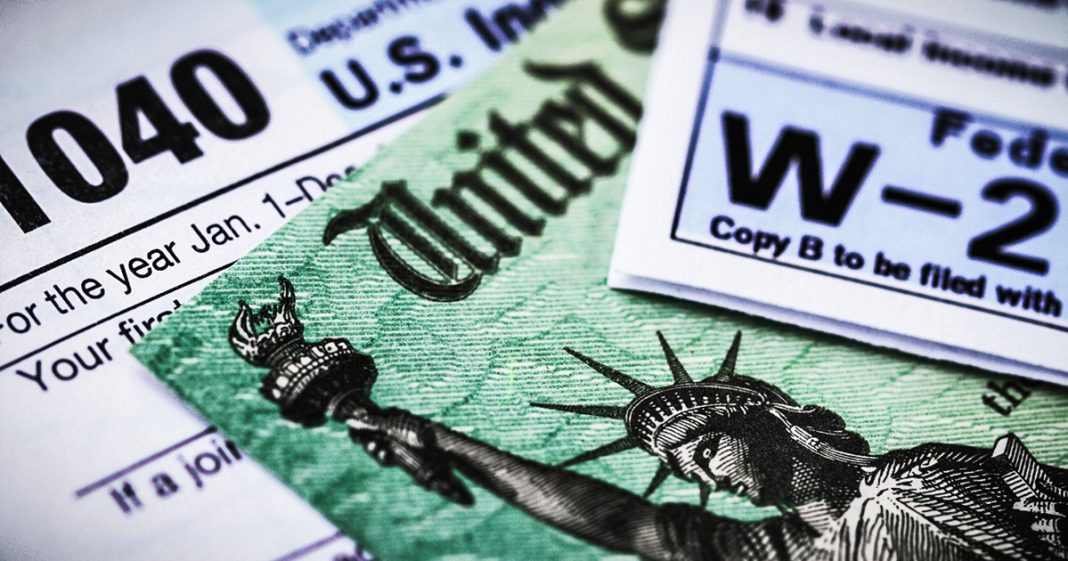 Republicans in Congress are now toying with the idea of proposing yet another round of tax cuts ahead of the 2020 election. They think they can either buy the votes of the public, or that they can force the Democrats to vote against the cuts and use that against them. Either way, this plan is a disaster and it is coming from a Party that, as Ring of Fire’s Farron Cousins has repeatedly said, hasn’t had a new idea since the 1980’s.

*This transcript was generated by a third-party transcription software company, so please excuse any typos.
Republicans right now in Congress and the Senate are a little bit scared. They’re scared of what’s going to happen to them in the 2020 elections. Not only have they all decided to, you know, hitch their wagons to Donald Trump, which is going to cost a lot of them dearly, but they also in general are horrible politicians who their constituents now know are horrible politicians should they’re trying to come up with something to offer people to say, Hey, we may not have good ideas like the progressive democratic socialists, but we got one idea for you and one idea only. We want to cut your taxes and I’m not speaking in hyperbole right now. That is actually the plan that is being discussed with the white house and Republican members of Congress according to staffers for Republican Mark Meadows who spoke to the Washington post and they said that absolutely Republicans are working on tax cut 2.0 because they think that’s going to save them in the 2020 election. Now, just to recap, the tax cuts and jobs package that they, uh, released or passed at the end of December, 2017 has done nothing to stimulate the economy. It has done nothing to give average workers a raise, which Paul Ryan and Donald Trump both said we’d get between four and $9,000 a year. But it turns out a lot of us are actually paying even more in taxes. So we got doubly screwed on the deal. We didn’t make money. We lost money on that plan from the Republicans. People understand that uh close to 90% of the tax cuts actually went to those at the top. Everybody knows this. Even Republican voters, they are willing to admit, yeah, I didn’t get a tax cut. This whole thing was a lie. And Republicans in Congress are responding by saying, you know what? Let’s do it again. Let’s do it again. Let’s just cut taxes. And it just further proves what I have been saying forever. And that is Republicans haven’t had an original idea since the 1980s. Everything that has come up, every problem Republican’s face, their answer is, let’s cut taxes. Let’s cut taxes. These are the dumbest people we could ever possibly have representing us in Congress because this is the only thing they know how to do. They are facing utter annihilation according to the latest polls, which they will change eventually, but they are facing annihilation in 2020 in all they can think of is, what if we could taxes again, this sounds like good idea, right? People like that. No. The problem with Republican politicians is that they think their constituents are even stupider than they are and they’re not. Maybe there was a time when they were, maybe there was a time when voters out there could be hoodwinked. Course that was an era before the age of information that we’re currently living in where you didn’t have YouTube explaining to you why the tax cuts didn’t help you. You didn’t have Twitter telling you that Republicans are lying to you. You didn’t have Facebook doing a really horrible job of fact-checking, but nonetheless, people have access to information right now and they’re using it to finally come to grips with the reality that Republicans have no ideas and they have no desire to develop any new ideas. And that, to me, is the worst part of that story.