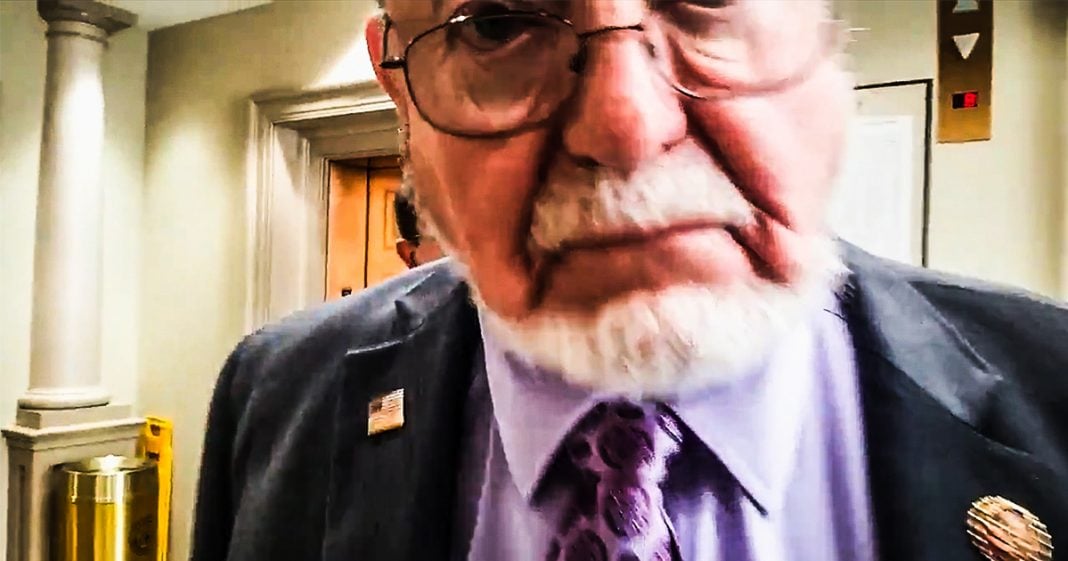 Republican Representative Don Young from Alaska didn’t want to take a question from a reporter in the halls of Congress, but rather than continuing to ignore the reporter, he decided to walk up to the camera and gently headbutt it. This was a very weird action, to say the least, but it appears that the Congressman was trying to be cute rather than actually trying to cause harm. Ring of Fire’s Farron Cousins discusses this.

*This transcript was generated by a third-party transcription software company, so please excuse any typos.
Republicans don’t like having to answer questions about what Trump may or may not have done in that phone call with Ukrainian president Salinsky and they will quite literally at this point do anything they can to avoid answering those questions. And Republican representative Don Young from the state of Alaska demonstrated just how weird they’ll get in order to not answer questions about Republicans. Here it is,
[we don’t pay for the president to pressure governments to interfere in our election. Totally up for talking to you guys. Is that an acceptable thing to have happen? It’s a simple, yes or no question. yes or no, okay. Is we talk to our friends. Good is an acceptable thing to ask foreign governments to interfere your options.]
Now, I had seen a lot of headlines yesterday saying Republican lawmaker headbutts camera and you know, I expected to see something a little more from that. What I gained from that, uh, odd little encounter there. I don’t think he was trying to do anything malicious, uh, to the camera or the camera person. I think he was trying to be a little bit cute and playful and just kind of distract us with his odd behavior so that we forget the fact that he still didn’t answer the question. And the question was, by the way, do you think it’s okay for the president to pressure foreign governments to interfere in our elections? Don Young was asked that multiple times in that video continued to refuse to answer it. His little staffer next to him starts going after the reporter who is from move on saying you’re just asking the same thing over and over. You’re just asking the same thing. You’re just asking the same thing. Well, yeah, he’s asking the same thing because you’re a guy still didn’t answer it, and now I’ve got a whipe forehead sweat off my camera lens you jerk. This is getting weird, folks. It’s getting very weird. But we’re seeing now that Republicans have no response to any of it. You know, we’ve seen Louie Gohmert threatened a civil war yesterday. Don Young, you know, head budding a camera. Jim Jordan was wearing a jacket yesterday that was nuts. But they have no answers to these questions because they cannot defend any of it. They don’t know what to say. They don’t know what to do. So they attack their procedure, they attack the reporters, they touch their heads to cameras as if that’s somehow going to answer these questions or make people forget about the fact that Republicans have no idea how to defend the indefensible that president Trump has clearly done.