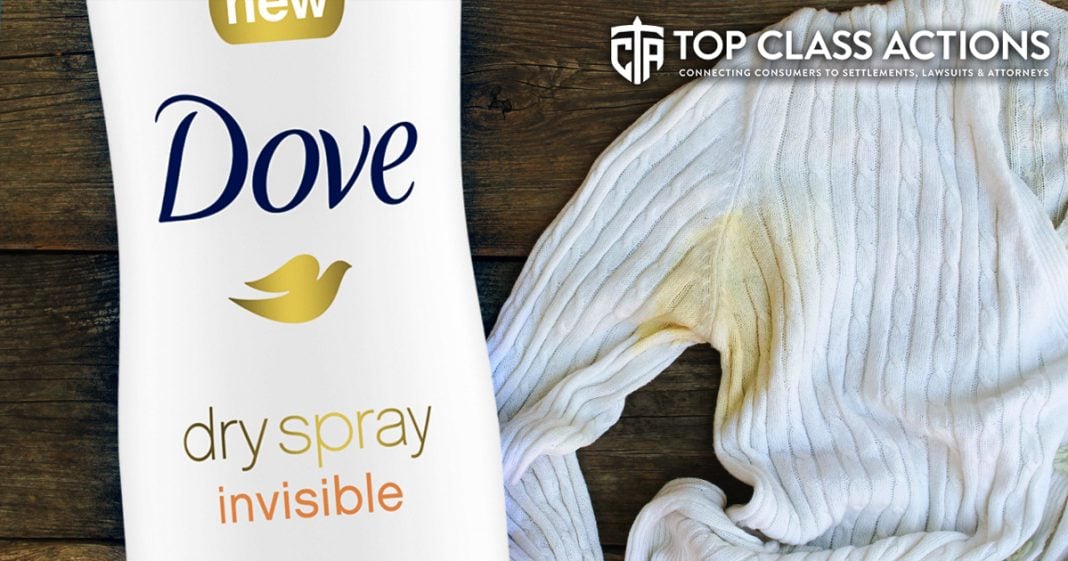 Farron Cousins:                  If you look at most advertisements for deodorants today, they’re all going to try to tell you that they are the brand that is not going to leave these unsightly stains under your arms, on your clothing. But unfortunately, according to a series of different class action lawsuits, a lot of these claims cannot be backed up by the products manufacturers. Joining me to talk about this is Scott Hardy with Top Class Actions. And Scott, we actually, we have three different class action lawsuits here against three different deodorant companies who all make the same claim that hey, use our product. It’s not going to leave any marks on your shirts. It’s not going to stain them. You’re going to be perfectly fine. You’re going to be super cool and confident all through the evening. These lawsuits say, yeah, none of that is true whatsoever.

Scott Hardy:                          Exactly, you know, we have the class actions against Degree’s DrySpray. There’s the Dove class action about Dove’s line of invisible antiperspirant sprays and then a Speed Stick with their Stainguard stick. That all, all three of these are promising that they’re not going to leave marks, that you’re going to be able to use these, you’re not going to yellow your shirts after long term use. But unfortunately, according to these three class actions, the science just isn’t there. In the case of Degree, they, they only do a slight reduction of aluminum, aluminum chlorohydrate from 23.3% to 20.2%. And that aluminum is what yellows your shirt. In the Dove invisible antiperspirant spray, there’s actually no difference between the invisible and the non invisible product according to this class action and the, but you are of course paying a premium for the invisible.

So the attorney is saying, how, how the heck can you go ahead and charge a premium for a product by changing the name but not changing the formulation? And on the Speed Stick class action, again, they’re just changing the amount of aluminum slightly by, by diluting it a little bit from 16% down to 10%. But that aluminum is what actually is, is what helps you, the antiperspirant work, and that also unfortunately causes the yellowing in the shirt. So there, there’s no magic ingredient in any of these three class actions or these three products, which is making it non staining or making a difference or justifying a cost increase according to these class actions.

Farron Cousins:                  Well, and part of the problem too that a lot of these consumers have, obviously they, they buy these products and then they say, okay, well maybe now because I’ve got this, that’s not going to leave a mark on my shirt. Maybe I don’t have to wear, wear the undershirt and I can just go with my regular shirt. And then suddenly this piece of clothing you have now has these marks on it that you could have avoided, you know, by, by putting on an extra layer or something like that. But you were told you weren’t going to need that. So this is a problem and it is costing consumers more money, not just with the premium they’re paying on the deodorant but also on the clothing that may now have marks that otherwise would not have had they not thought that the product was faulty.

Scott Hardy:                          Exactly. And for any of us that wear dress shirts on a regular basis, we want these dress shirts the last. We wear under shirts for a reason. We don’t want to go ahead and leave stains on our dress shirts. You know, if you’re like me because I’m a giant, all my stuff is custom fit. So me having to get rid of a shirt because it’s got stains is expensive. I’d much rather go ahead and be able to get rid of an undershirt or I’d be happy, like you said, to pay a premium. And of course I could do that because I’m in a dry climate. When I was out in Florida on a regular basis, wearing dress shirts, I couldn’t wear an undershirt because in the middle of summertime it’s humid. It’s just that heat as you well know, gets to you. So you can’t even wear an undershirt. So you’re hoping something will work and not cause your shirt, your shirt to get all marked up. But unfortunately that doesn’t seem to be the case.

Farron Cousins:                  So a quick question on these though, because again, we do have three different class actions. Are these all different firms or who’s, who’s filing these cases here?

Scott Hardy:                          So all three of these class actions were filed by David F. Harvath of the Harvath law firm. And so we see that pretty commonly where an attorney will identify a problem among multiple companies and then sue each individual company and those products to try to get those issues fixed. In this case, David Harvath said, hey, you know, I, I’m looking at the science for this and it’s just not getting backed up by what these guys are doing in the cause and effect. So, you know, he found out these top three supposedly anti staining, no white mark deodorants and got class actions filed against them.

Farron Cousins:                  Fantastic. For more information on any of these lawsuits, please follow the links in the description of this video. Head on over to Top Class Actions and while you’re there, make sure you sign up for their weekly newsletter. Scott Hardy, Top Class Actions, always a pleasure talking to you.