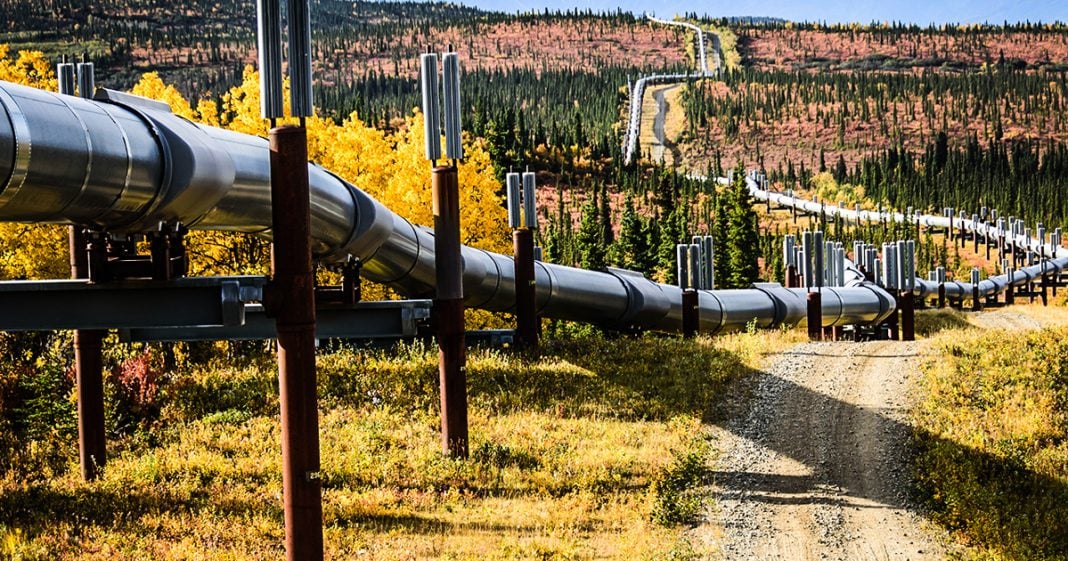 The Keystone Pipeline (not to be confused with the pending Keystone XL Pipeline) has spilled close to 400,000 gallons of oil on North Dakota soil this week. The company that runs the pipeline, Transcanada, has yet to determine the cause of the spill, but this shows how dangerous these pipelines can be. This isn’t the first Keystone spill, and it certainly won’t be the last. Ring of Fire’s Farron Cousins discusses this.

*This transcript was generated by a third-party transcription software company, so please excuse any typos.
As it stands right now, the Keystone pipeline has now leaked roughly 400,000 gallons of oil onto the state of North Dakota. Now, right now, this oil spill is relatively small considering some of the other oil spills we’ve seen in history, but it’s still a disaster right now it’s covering the area that’s about half the size of a football field, so not huge, but still potentially devastating is that oil is going to soak into the ground and could potentially hit the water aquifers. Now, here’s the thing. The Keystone, uh, owners, TransCanada have said they’re not sure what would cause the leak yet, but we’re gonna send our independent contractors down there and they’re going to take a look at it and they’re going to give back to us and we’ll figure out what happened eventually. Meanwhile, the oil keeps spilling. But that’s the problem. That’s the problem with TransCanada. That’s why they couldn’t be trusted with the Keystone pipeline, let alone the Keystone XL pipeline, which is still something that is going to happen right now. Folks, it has not yet become a reality. They’re still going through some of the reviews, but as long as Trump’s in office, it will eventually become a reality. I’ve done a lot of writing and reporting on the Keystone pipeline and the Keystone XL pipeline for the last 10 years, and let me tell you some of the reasons why this disaster here in North Dakota was completely predictable. In the first few years of operation, the Keystone pipeline was averaging one oil spill every three weeks, every three weeks. There would be a new rupture in that pipeline and sometimes it would go on for days and days and days. And the reason is because there’s no monitoring of this pipeline, at least not in any meaningful way. They have their little independent contractors like the ones they’ve sent to North Dakota to find out why this happened, who occasionally every couple of weeks we’ll go do inspections of the pipeline, visual inspections, meaning if we don’t see oil above the ground, we’re going to assume everything’s good. That’s the extent of those inspections. Pinhole leaks can not be detected by the digital monitoring systems that they have and you may think, Oh well that’s a pinhole leak. That small, right and undetected pinhole leak can leak hundreds of thousands of gallons of crude oil into the ground. Folks, they may be small, but they’re just as damaging and they can’t be detected by this company because their software and their monitoring systems is so completely archaic. Yes. What’s happening in North Dakota right now is absolutely disgusting. A tragedy. It could potentially affect the health of people in that area, but it was also 100% predictable. Given this company TransCanada’s history, we know that they do this. We know that they don’t monitor. We know that they don’t care about anything other than money and that’s the point of these pipelines. This is not making the United States or Canada more energy independent. It’s about sending this oil to ports across the United States where they can then sell it to other countries. Meanwhile, we pay the environmental price for it just like we’re doing in North Dakota, and just like we would do all along the route of the Keystone XL pipeline, if that thing ever gets constructed, oil pipelines aren’t safe. There is no way around it. There is no gray area. There is no, but what if we know, they’re not safe and as long as they exist, they are going to continue to spill oil onto our land.