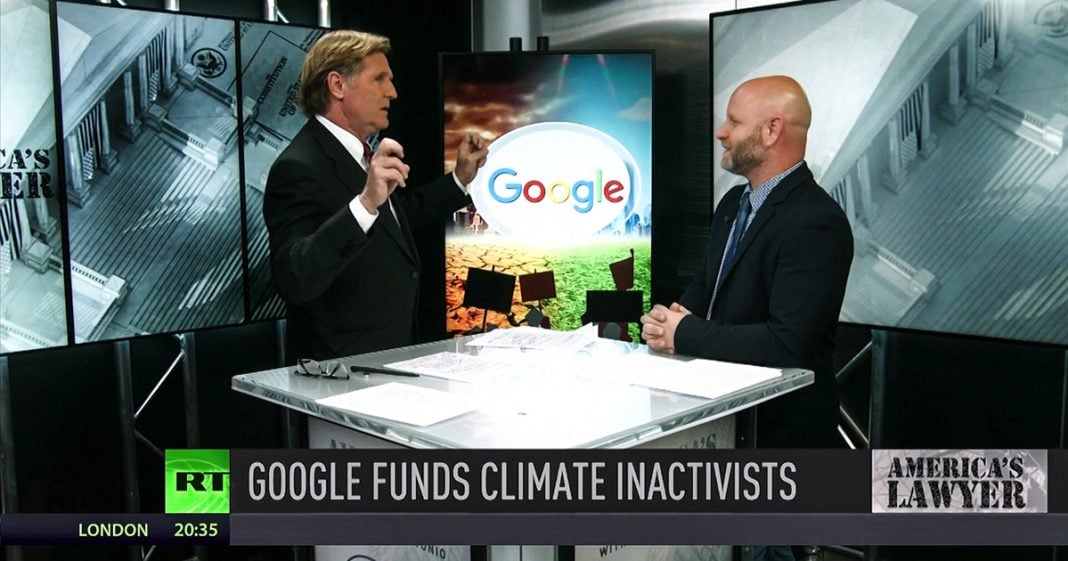 Via America’s Lawyer: Google has been found to be funneling money to organizations that are working to refute climate change. Mike Papantonio and Farron Cousins discuss.

Mike Papantonio:             Tech giant Google, here’s another one, was busted recently for funneling money to climate change deniers, even though the company claims to take the issue of climate change very seriously. Oh, this is so important to us. What a bunch of bunk. This isn’t important to them. This is all about them trying to protect themselves. They’re given all this money to conservatives because they’re trying to say to the conservatives, don’t let antitrust interfere with our business. Take it from there.

Farron Cousins:                  Right. What’s, what Google is doing right now is they’re trying to play both sides of the field. On the one side, they’re trying to placate people who care about the environment, saying, listen, Google’s a good company. We’re out here. We want the planet to be greener. We do not want pollution. We want to be the good guys in this fight. Behind the scenes, they’re pouring tons of money into groups like the Competitive Enterprise Institute, The Heritage Foundation, Cato Institute who are pumping out nonstop climate change denial science that’s not even really science. Because one, as you said, they want no regulations on them. They don’t want these antitrust cases that are coming at them pretty quick and two, because they’re, they’re not genuine. They’re perpetrators above all else.

Mike Papantonio:             Okay, let’s, let’s, let’s, let’s not run through this too quickly. Let me, so, so the listeners can understand. Heritage Foundation, they’re actually creating information about the fact that there’s no such thing as climate change.

Mike Papantonio:             The Competition Enterprise, doing the same thing. They’re hiring biostitutes all over the world to say that climate change is nonsense. Google knows this. Google puts it on their site. Google knows exactly who they are and Google has the audacity to say, oh no, we’re all for climate change. If you look at our operation, we’re moving completely towards a, you know, towards non fossil fuel kind of business. But nevertheless, Koch think tank. Who is more rabid in this country than the Koch think tank. So why are they taking their money? They’re taking their money because they want access to, to conservative politicians who are going to stop the, stop what should happen. Which is to say, you know what? You better be worried about antitrust, Google. You know, Amazon, you better be worried about antitrust. This is the takeaway, isn’t it?

Farron Cousins:                  It, it is and that’s how they get away with this. Because again, on the surface, the story everybody sees is Google wants to make the world a better place.

Farron Cousins:                  Right, and unfortunately, nobody looks behind the curtain. Nobody follows the money anymore. And that’s where you find these real damaging stories about the fact that, yeah, you’re giving money so they can promote climate change denial, but you get out of it. No regulations, no antitrust laws, you profit off of this.

Mike Papantonio:             Yeah, now let’s talk about, this isn’t little money. We’re talking about money that it, that gets towards the billions of dollars if you look at all stories. And so to have them doing ads, to have their CEO showing up on the news and said, oh, we just so much care about climate change, knowing that they’re funding this whole process. That they’re putting their stories out. Actually, there was even a story not long ago where they had a choice. Do I put the anti climate change story up there because we’re getting money from the Cato Institute, or do we put some entity who is, is very bothered by climate change and wants to do something about it? Where do you think they go? They go to the Cato Institute and they say, well, they’re more credible.

Mike Papantonio:             So this, this whole story to me, it just shows you the ugly undercarriage of, of, of, of these tech companies right now. They’re sitting, they’re no different, they are no different from any corporation that’s trying to, to, to, to buy access. Like the next story we’re going to talk about. You know, the, it’s all about corporate America spreading money around, but they don’t look like corporate America.

Mike Papantonio:             They don’t dress up in suits. You know, they have these cool little surroundings where they ride bicycles and blow up balloons in the afternoon. Everybody eats lunch together and you think, oh, this is, this is a kinder, gentler company. No, they’re corporate thugs just like all the other corporate thugs. That’s what upsets me about this whole deal with Amazon and Google.